B.C. producer diversifies and installs a European-type system. It reminds him of the way his father used
to do things. 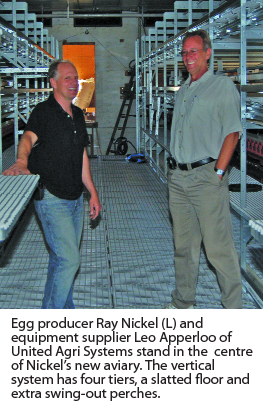 “For me, this is something of a trial,” Nickel said in mid-September, stressing the system is as yet unproven as it will not see its first birds until the end of September.

“If it works like it’s supposed to, I would consider a larger barn.”

Nickel’s road to the aviary system began with a decision to diversify his egg production to include organic eggs (he is also building a new conventional caged-layer barn).

“The main reason I considered diversifying is because of the consumer pressure for cage-free eggs,” he says.

Rather than commit to entirely new construction for a trial venture, Nickel decided to convert a former beef barn, believing the 120- by 50-foot-high ceiling barn to be well suited for conversion.

“This barn was uniquely constructed so renovating it was reasonable,” Nickel states.

Because he is “not sure conventional free-run production is economically sustainable,” Nickel approached equipment supplier Leo Apperloo of United Agri-Systems for help and ideas. “I wanted to take advantage of the potential of having more birds in a restricted space.”

“This was a fun project,” Apperloo says, “Ray wanted to know how to maxi-mize the barn for organic free-range production.”

While the barn would house about 3,500 layers in a standard floor-run organic free-range system, the tiered Jansen system effectively doubles barn capacity to about 7,000 layers not including perch space.

“If one takes into account the cost of construction to double the floor area (which was not even possible in this case) to accommodate 7,000 layers in a standard free-run system, Ray’s overall savings of installing the compact aviary is about 25 to 30 per cent,” Apperloo states.

While this is United Agri’s first aviary installation, Apperloo notes the company has already installed a lot of Jansen free-run and free-range floor systems “and this grew from that.”

“Water is only accessible by the nest boxes so this will draw birds to the nest box area,” Nickel explains.

To get the birds used to the idea of going up to get water, Nickel is already forcing his 12-week-old pullets to jump three feet to get water.

The nest boxes are made of plywood with plastic partition walls. According to Jansen, this results in “a bird friendly nest with a good climate.” At the bottom of the nest boxes are open mats that allow the dirt to fall through and the eggs to be clean.

Nests provide space between the expel system and the back wall to eliminate suffocation during high temperature or high nest density. The nests have also been designed so water will flow away from the nests and to ensure birds do not reach the eggs after they are laid.

A belt under each tier removes the manure, dropping it into a channel at the end of the barn from which it is removed using a chain-style barn cleaner, common in stanchion dairy barns.

“This may not be as high-tech as some manure removal systems but it is much more economical,” Nickel notes.
As each system is about eight feet wide, Nickel has installed two systems in a mirror image style separated by a five-foot central walkway fully accessible to the birds.

The systems are mounted on a partial slatted floor to prevent birds from going underneath the system. The plastic slats are sturdy and easily cleaned and mounted on flat hot dipped galvanized supporting bars designed not to touch the manure. Removable net curtains have been installed at the edge of the slatted area to keep birds confined to the system for the first few days. Once they are used to the aviary, the curtains are removed and birds have access to the entire barn and outside grazing areas.

In its promotional literature, Jansen claims the aviary system has a minimum of floor eggs, soft nest padding to avoid cracked eggs and removes about 80 per cent of the manure from the barn, resulting in a better climate and lower risk of disease.

As he has yet to try the system himself, Nickel cannot verify that but is certainly banking on the claims being true.
“I’ve gone full circle here,” he says, noting that when he was growing up, “my dad used slat barns, rollaway nests and scratch areas.”
Like father, like son. n