Assessing the impact of IBV variants in Canada. 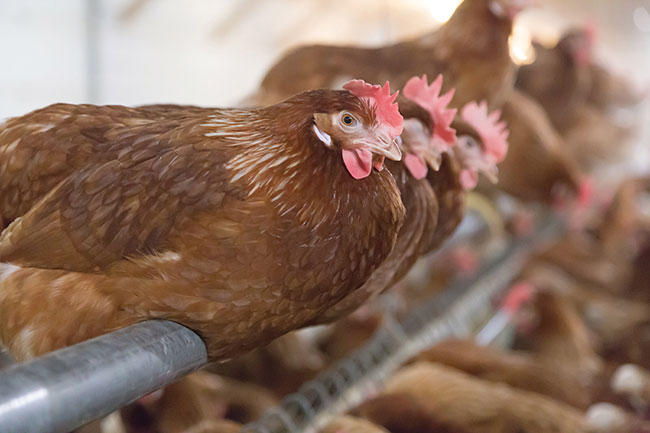 A University of Calgary research team is leading a project to assess the impact of infectious bronchitis virus variants on egg production and fertility of chickens. Photo: Big Dutchman

As scientists around the world grapple with evolving variants of the virus behind COVID-19, Dr. Faizal Careem searches for strategies to help poultry producers manage variants of another coronavirus, the infectious bronchitis virus (IBV), that are showing up across the country.

Canadian poultry producers depend on vaccines to protect flocks from IBV infection, but as Careem is discovering, new variant strains are posing new control challenges. Careem is the head of the Department of Ecosystem & Public Health, and a professor of virology, at the University of Calgary Faculty of Veterinary Medicine. He’s leading a research project to assess the impact of IBV variants on egg production and fertility of chickens.

“IBV is of particular concern to layer operations,” Careem says. “It infects both young and adult chickens, causing lesions to the respiratory, reproductive and urinary systems, depending on the strain.” The age of a bird infected with IBV also determines how the disease impacts the reproductive tract of birds. As a result, IBV infections can damage the developing reproductive tract in young birds and cause reduced egg production and quality in layers. Careem’s work is looking at the impact of variants in young birds and adult layers.

There are IBV vaccines currently available in Canada, but the continuous emergence of variant strains of the virus has led to infectious bronchitis (IB) outbreaks in vaccinated flocks, resulting in significant economic losses. “We need to better understand the variants to be able to develop more effective vaccination protocols that rely on cross protective immunity,” Careem says.

Careem and his research team are well into their multi-year study to determine the impact of the IBV variants on egg production and bird health. They are also evaluating existing vaccine options to ultimately provide better protection options for producers. “If the IBV variants that compromise reproductive performance are better known, it will help by improving and developing mitigation strategies and identifying potential vaccine candidates for the Canadian poultry industry,” he says.

The five-year project began with the isolation and identification of key IBV variants from on-farm samples received at the Animal Health Laboratory at the University of Guelph, representing poultry operations across Canada. Four specific variants of concern were identified – Delmarva (DMV/1639), 4/91, Mass and CA1737.

Most of the team’s work to date has focused on the DMV/1639 and 4/91 variants. DMV/1639 has been shown to have a significant impact on egg layers when infection occurs in young and adult birds. The 4/91 variant caused kidney lesions that would cause significant losses for the poultry industry as a result of poor growth performance and mortalities. And the Mass variant has been linked to shell-less egg syndrome.

DMV/1639 strain causes significant production losses
From variants isolated in their lab, Careem and his research team Mohamed Hassan and Shahnas Najimudeen evaluated the impact of the DMV/1639 and 4/91 strains on two ages of birds – day old chicks and hens in lay.

Day-old specific pathogen free female chicks were infected with the DMV/1639 variant and were processed at 16 weeks of age. Approximately 40 per cent of infected hens had developed cystic lesions on their oviduct – a condition leading to false layer syndrome with a huge potential for economic losses for egg producers.

DMV/1639 is a variant that impacts kidney function and would also have a negative impact on the broiler sector. Kidney lesions are usually severe in younger ages, causing poor growth performance and elevated mortality in broilers in particular.

The research team has also been working on the Mass variant. It’s been tied to shell-less egg syndrome in Alberta and Saskatchewan layer operations over the past decade. “We are currently running an experiment to develop an effective vaccine protocol to control the Mass variant,” Careem says.

Understanding the impact of these variant strains of IBV is step one. Finding protection options for the industry is a key focus for Careem and his team. “We’re in the process of evaluating vaccination strategies that could provide cross protection for birds against the variants.”

This research is funded by the Canadian Poultry Research Council as part of the Poultry Science Cluster. Additional funding has been provided by Egg Farmers of Canada, Alberta Agriculture and Forestry and Egg Farmers of Alberta.