Rosalind Colony poultry boss Mike Stahl was given the task of managing an aviary, and has enjoyed the challenge 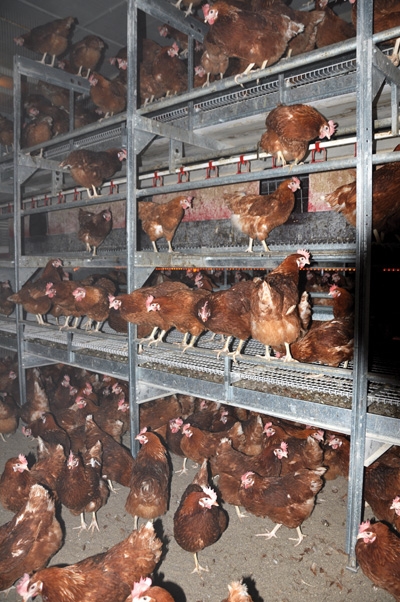 Mike Stahl says egg producers shouldn’t be afraid to try employing an aviary system. Despite the challenges, he has enjoyed learning about the system and the birds.

Mike Stahl says that egg producers shouldn’t be scared to try an aviary system. But then the poultry boss of the Rosalind Colony near Camrose, Alta., has proven that he isn’t afraid to take on a challenge.

Formerly a plumber at the Byemoor Colony – located about 130 kilometres south of Rosalind – Stahl was chosen to manage a new organic free-run egg operation that the colony had been planning to build. But during the planning phase, the colony made the decision to split, purchasing land around Rosalind, and it was determined that the new egg operation would be built there instead of at Byemoor.

The initial planning for the barn was completed by Byemoor resident and current Alberta Egg Farmers chair Ben Waldner, who consulted with Meb Gilani, owner of the colony’s grader, Sparks Eggs. At the time, Gilani was planning to build his own free-run operation (see our November 2011 cover feature) and had visited numerous free-run aviary operations in Montana for ideas.

The barn has three separate housing “units” – two for the layers, and one for pullets. The pullets are housed in the centre of the barn, with the layers on either side. An office, shower, washroom, and egg collection and storage rooms complete the space, dividing the barn into “bird” and “people” areas.

The birds are raised in an aviary and pullet-rearing system, both manufactured by Farmer Automatic. Each layer aviary and the pullet system can house 10,000 birds, but only 7,000 birds are raised in each unit to fulfill the lower density requirements of organic production. The set-up is “all-in, all-out” – the pullet room is its own structure and is fully enclosed and separated from each of the layer areas. Doors near the floor of the pullet room connect to each layer aviary, allowing the pullets to be moved to one of the aviaries when they reach maturity.  Each of the layer sections and the pullet section has it’s own ventilation.

The walls of the barn are not only energy-efficient, they were manufactured on-site. The colony manufactures a prefabricated wall system known as EnerGard for Greenland Building Systems (www.gogreenland.ca). The walls are constructed using an I joist instead of 2×6” or 2×4” studs, and are filled with a polystyrene infil. The result is an energy efficient wall where “the barn won’t get wet, and there’s less carry-through of air,” says Stahl. The walls are also sprayed with a fire retardant –required by provincial building code – as well as a mold and moisture inhibitor.

The walls of the barn are 12 feet high, with the first two feet comprised of concrete, and the other ten feet is EnerGard. The walls of every house on the colony were also constructed using EnerGard.

Rosalind has two large manufacturing shops that could rival a small factory, where the walls are produced. In addition to the layers, it’s an important source of revenue for the colony, because Stahl says the 4,500 acres of land at the colony is too good for cattle, so it has been cultivated and seeded to canola and wheat.

Although Rosalind has plans in future to build a feed mill, they don’t plan on growing their own organic crops. “The transition is too long – it takes three years of being sterile, and it just doesn’t pay,” says Stahl. The reason for building a feed mill is “consistency and quality control,” he says. He also wants to use a best cost formulation instead of least cost, and having his own mill will allow him to do this. The grass outside the barn that the birds can access in the warmer months is organic.

Heating the bird rooms is very cost efficient, not only because of the walls but also because of Stahl’s previous plumbing experience. Stahl installed two condensing boilers (one 400,000 BTU, the other 150,000 BTU) to heat the pullet room and aviaries. “This has resulted in big savings,” he says. The pullet room has in-floor heating, and being in-between the two aviaries, only has one outside wall so very little supplemental heat is required.  The aviaries also require little heat, as the adult birds produce enough heat on their own.

The first flock of pullets entered the barn in January 2011, and moved to one of the aviaries in May 2011, and the second flock of layers went in June 2011. The first flock was a learning curve for Stahl, and he admits to having problems with floor and system eggs. He credits Farmer Automatic, who sent staff from its headquarters in Germany to give him some help. “This help was paramount in the beginning,” he says.

Although he still has floor eggs from his first flock, he’s proud of the fact that he has only had five floor eggs and two system eggs with the second flock. He says you need “chicken savvy” to understand how to combat potential and existing issues in the aviary. He spends a lot of time in the barn, observing behaviour, which has led to a few alterations, he says. Although he won’t give up all of his secrets, he says he has made some adjustments over time and slowly figured out what works, and what doesn’t.

One thing he tried with the second flock is to mount artificial eggs in the nest boxes, thinking that it might help prevent system and floor eggs. “I can’t say for sure that it works, but this flock has been much better,” he says. One thing he knows that does work is to help spread out the birds with respect to nesting space. Having noticed that the last nest box in the row on the system would get crowded, he installed wood partitions every 10 feet on the walkway in front of the nest boxes to help spread out the birds.

Like many other producers raising layers in an aviary, Stahl realizes that lighting and feeding are key. Lights are dimmed from the outside walls first, then the centre lights are dimmed to indicate to the hens that it’s time to roost.

He feeds four times a day, and some feed must be left in the trough before the lights go out, because midnight feedings can’t be given in an aviary. Three hours after the lights come back on, he does the first feeding, giving the birds enough time to lay and not get distracted by the feeder.

As for dust, Stahl admits to having to wear a mask inside the aviary and that the dust is worse in the afternoon, particularly in winter when the air is dry. He’s been consulting with Dr. Tina Widowski at the University of Guelph on this, and says he is going to start using a sprinkler system to reduce the dust levels.

Stahl is also experimenting with the type of light bulbs used. The first flock was reared using incandescent lights, and the second was reared using compact fluorescents. He has been measuring both with a power meter to compare the cost difference, but thinks that he will likely be replacing at least one of the aviaries with LEDs.

For his first two flocks, Stahl says he has achieved about a 91 per cent production rate, which is pretty good for an organic free-run operation, but it’s not good enough for him. “I want to do better than the manual,” he says. For his third flock, he’s set himself a goal of 94 per cent. With his attention to detail and tenacity, he has a good chance of achieving it.