Alternative housing: Lessons from the Swiss 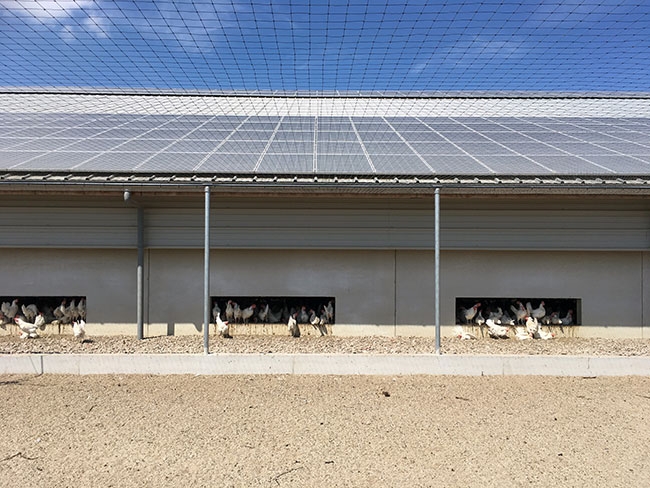 As Canadian egg producers move towards alternative housing, they will need to prepare for new challenges. In Switzerland, where battery-caged production was banned outright in 1992, a group of researchers works to address those challenges, including nest box behaviour, piling and smothering issues, depopulation, ranging behaviour and keel bone damage.

As Swiss producers generally have low mortality – less than 0.5 per cent – and high performance – 90 per cent going into end of lay – their expertise offers valuable insight to Canadian producers as they make the transition.

Nest box behaviour
Producers switching from caged to alternative housing can expect changes in the way they collect eggs. In non-cage systems, such as aviaries, birds are free to go wherever they want. This freedom complicates collection.

Training hens to use the nest box can be a laborious task that takes two to three weeks. “There also seem to be some birds that visit the nest box irregularly or not at all,” says Dr. Michael Toscano, lead researcher at the Center for Proper Housing, Poultry and Rabbits (ZTHZ) in Bern, Switzerland. ZTHZ is a collaborative effort between the University of Bern and the Federal Food Safety and Veterinary Office.

ZTHZ has two alternative layer houses set aside specifically for research on these types of challenges. The first houses eight groups of 360 hens, while the second houses 20 groups of 225 hens. Both have winter gardens and one has an outdoor foraging area. They use the facilities to conduct research that not only improves welfare, but also addresses challenges faced by farmers.

At ZTHZ, Toscano studies what drives nest box preference. He believes that lighting plays a role in preference. Some hens, he says, are attracted to darker corners – a problem that is easily solved by making sure lighting is evenly installed. He’s also noticed that the birds seem to prefer the walls of the nest box (rather than the open middle area), perhaps because the walls make them feel safer. Using a piece of wood to create an additional wall inside could motivate the hens to use the nest box area more evenly.

Piling and smothering
Another challenge unique to alternative housing systems is piling. Piling incidents are exactly what they sound like – incidents where many hens pile together in groups. No one knows what causes hens to pile on top of each other, but many agree that it poses welfare concerns.

Under the direction of Toscano, PhD student Jakob Winter is conducting a study to determine the causes of piling. He first conducted an explorative study where he surveyed Swiss farmers and identified several where the problem seemed to occur often.

During the course of the study he found that smothering incidents occurred in eight of the 13 identified flocks. Seven of those experienced regular losses of two-to-five birds per week. On one farm, 60 hens died in one single event, an incident that cost the farmer nearly $4,000.

The duration and severity of piling events differs greatly from farmto farm. Some events last just 30-to-90 seconds; others lasted as long as four hours. It’s the longer lasting piles that are especially concerning, Winter says.

Swiss researchers are focusing on three factors that trigger piling – light, temperature and novel objects that attract attention. Using the research facility at ZTHZ and an infrared detection system designed by on-site technician Markus Schwab, Winter creates scenarios based on the explorative study that he believes will lead to piling incidents. This is done to further investigate the problem.

Final results from Winter’s research will be available in the near future. If interested, contact Michael Toscano at the Center for Proper Housing, Poultry and Rabbits (ZTHZ) at the University of Bern. For now, producers are advised to assess barns carefully for heat and light hotspots, as well as novel items that might attract the flock.

Depopulation
In both caged and aviary housing systems, depopulation is a challenging process that can cause fractures, dislocations, muscle injuries and stress. Under the direction of Toscano at ZTHZ, PhD student Christopher Gerpe is working on two depopulation projects. Their study is the first to look at depopulation in aviaries.

In the first project, hens were evaluated post-depopulation to determine the percentage of injuries caused by the task.

“Preliminary results suggest that approximately eight per cent sustained an injury that potentially occurred during depopulation,” Gerpe says. “Our efforts to reduce these adverse effects are based on our own observations, meetings with the Swiss egg industry, animal welfare organizations, producers and the input gained from a professional depopulation company in the Netherlands we visited last year.”

The aim of the second project is to find a way to reduce stress, injury and worker fatigue during depopulation. Researchers are testing a number of variables as possible stressors, including lighting and handling time. While Gerpe cannot offer conclusive results at this point, he has two helpful suggestions for producers. Longer handling times are associated with stress for the animals and fatigue for the human workers, so reducing handling time is recommended.

“We recommend that the producer should not engage in the actual depopulation procedures but rather take the role of a supervisor or organizer to ensure that the process runs smoothly,” Gerpe says.

Ranging behavior
While consumers want eggs from hens that have been outside, the fact is that flocks with access to the outdoors do face increased risk. They are less protected from predators, and more vulnerable to parasites, pests and disease. Moisture coming into the barn is also a problem, Toscano says, who adds it’s a problem because once absorbed by the litter, moisture can create ammonia problems.

There are plenty of benefits of giving outdoor access to hens as well, Toscano points out. Outside, they are better able to perform natural behaviours that they cannot do so well indoors, including dust bathing, foraging and scratching. More active birds tend to have stronger bone structure.

According to Toscano’s observations, not all birds enjoy using the pastured areas, and some never use it. To make outdoor range space more attractive to hens, he suggests providing hedges, long grass or stone piles. Hens will use them to protect themselves from wind, sun and predation.

Although he’s not certain why, Toscano notes that providing outdoor range tends to impact feather pecking. “Where flocks have access to range, the flock tends to have less feather pecking,” he says. “Now whether that’s because birds that are feather peckers go outside or whether birds that would be feather pecked are going outside to get away, we don’t know.”

Keel bone damage
Perhaps the biggest welfare issue that surfaces in alternative housing systems is keel bone damage. In fact, research shows that anywhere from 30 up to 97 per cent of hens in open aviaries have keel bone fractures in different states of repair. The cause is fairly obvious: Chickens do not fly well. As they move from tier-to-tier and throughout the open aviary, they crash and fall, breaking bones in the process, which is believed to be the main cause. It’s often hard to tell if they are in pain, though, since few exhibit signs, even in extreme cases.

Preliminary results in Rentsch’s behaviour study show that new keel bone damage does indeed impact vertical motion and as a result, decreases movement between the different levels of the barn.

Rufener, who examined how keel bone damage impacts productivity and mobility, found that there was no link between keel bone fractures and egg quality, a discovery that piqued her curiosity.  “We hypothesized that hens would have less energy and minerals available for the egg shell because they would need it for the fracture,” she says.

“Hens with extremely severe keel bone fractures laid approximately 16 per cent fewer eggs than hens with no fractures at the age of 61 weeks,” Rufener says. “This suggested that hens could maintain their high productivity until shortly after peak of lay – so 37 weeks – but repartitioned their resources from reproduction towards fractures later.”

Preliminary results in the mobility study show that there is no link between fractures and movement between the five monitored zones – the winter garden, litter, lower tier, nest box tier and upper tier. There does, however, seem to be a change between which locations they move. With increasing fracture severity, hens spend more time on the top tier and less time in the litter and lower tier,” Rufener observes.

Both Rentsch and Rufener’s studies make the case for the use of ramps between tiers in cage-free aviaries. Once installed, hens will use them – injured or not. Connecting the different tiers should facilitate movement between tiers and reduce keel bone damage that results from falls and collisions.