Lighting and the broiler code 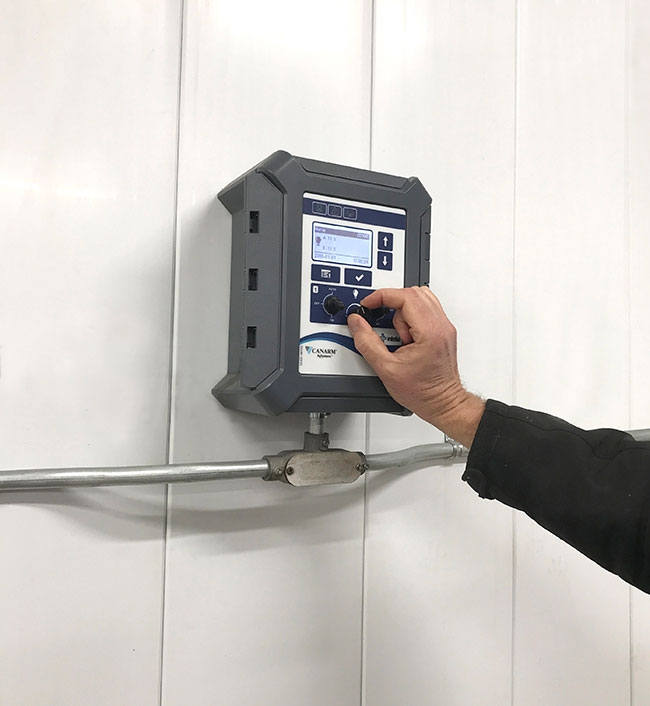 While, traditionally, producers thought that constant or near-constant light maximizes growth, research results show that is not the case. PHOTO CREDIT: Canarm AgSystems

The recently updated Canadian code of practice for the care and handling of broilers includes new requirements regarding lighting. The code takes into consideration expertise from a committee of researchers and specialists, and also considers several studies out the University of Saskatchewan, conducted by poultry researchers Karen Schwean-Lardner and Henry Classen in collaboration with Aviagen. Schwean-Lardner presented her findings at a recent Poultry Industry Council broiler meeting.

The studies were conducted in order to better understand the relationship between day length, welfare and productivity. Their findings, as well as conclusions from other studies, led to the new code. It states that chicks and poults must be provided with a minimum of one hour of darkness in each 24-hour period after 24 hours of placement.

Following that, the dark period must be gradually increased to a minimum of four hours in each 24-hour period by day five of placement. This differs from traditional thought on lighting programs for broilers, which was that constant or near-constant light maximizes growth rate.

The study looked at a number of parameters under one, four, seven and 10 hours of darkness, Schwean-Lardner explained. During the photophase period, the researchers used a light intensity of 10 lux. Parameters the researchers evaluated included body weight gain, feed conversion, health and mortality and overall bird welfare. To ensure accuracy, Schwean-Lardner replicated the trials five times over with nearly 40,000 birds.

The results
According to her research, overall, six hours of darkness gives the strongest circadian/diurnal rhythms. Circadian rhythms are physiological, mental and behavioural changes that follow a daily cycle. In humans, that cycle is more or less 24 hours.

Sleeping at night and being awake during the day is an example of a light-related circadian rhythm. Circadian rhythms are important as they impact everything from melatonin production and immune function to sleep patterns and growth hormones.

When comparing different durations of darkness, Schwean-Lardner’s research showed that six hours gave the stronger rhythm, lowering levels of metabolic and skeletal disorders. So why then does the code require just four hours?

Despite the fact that Schwean-Lardner’s research showed six hours as being the optimal number of hours of darkness needed, four hours also gives a significant circadian rhythm. “We still get a diurnal rhythm, and it still gives all of the positive things we found with six hours, just maybe not to the same extent,” she said.

Under four hours of darkness, however, the broilers’ activity patterns weren’t quite as high as they might be under six hours. Nevertheless, four hours is a significant improvement over no darkness, she said. “We came to an agreement that four hours as a requirement would be fantastic for both sides,” she said.

Regarding feed efficiency (kg of weight gain per kg of feed consumed), the most efficiency was always achieved in systems with 10 hours of darkness.

Mortality
Concerning mortality and culls, overall, the lowest values came up under 17 hours of light and seven hours of darkness. “Certainly, adding darkness reduces mortality,” she said. “We’re often told that big birds have a higher mortality rate, so that mortality is strictly related to bird size, but you can see very clearly that that is not the case. Because birds under 17 and 20 hours of light were exactly the same size.”

The researchers also looked closely at mortality and culls related to skeletal defects, which they found to be much improved under more hours of darkness. “Just by giving darkness you can reduce things like Valgus-Varus and other skeletal deformities,” Schwean-Lardner said.

In this case, the researchers observed great improvement at seven and four hours of darkness, but beyond that very little improvement was seen, she said. It’s important to note that these defects are not just production concerns – they also impact overall bird welfare.

Mobility
During the course of her study, Schwean-Lardner also looked at mobility. This meant going into the different systems and scoring how the birds walked. Birds were given a score between zero and five, five being immobile. Research out of Europe shows that birds that score between three and five are actually in pain, making it a welfare issue.

For the purposes of this research, Schwean-Lardner calculated the percentage of birds that fell into that three to five range and evaluated them at a number of ages within the flock. “We have the most birds in those high gait scores under 23 hours of light,” she said. “Twenty hours tends to be intermediate, and then 17 lower. “In general, the more darkness, the better mobility,” she said. They also found a slight improvement in footpad lesions with more darkness.

Behavioural changes
Under the different lighting systems, the researchers also analyzed behaviour: time spent walking, feeding and resting. Under 23 hours of light and one hour of darkness, they saw a reduction in exercise, exploratory behaviour, nutritive behavior, comfort and play. “When we started this work, producers told us that giving birds 23 hours of access to light allowed them to walk around the barn more and to feed more, and it made sense,” Schwean-Lardner said. “But that is not what we saw at all.”

What they did notice was that birds lay on litter significantly more under the system with 23 hours of light. However, when they switched to 20 hours of light, they saw an improvement. They observed even more progress in the systems with 17 hours of light. “Giving them darkness means they spend less time laying on the litter,” Schwean-Lardner said. “They’re very inactive on those long day lengths.”

Affect on diurnal rhythms
Perhaps most interesting, though, is how darkness regulates diurnal rhythms. Something has to signal that rhythm, Schwean-Lardner said, and usually it’s light and dark. This, in turn, signals the production of melatonin, immune hormones and coordinates when activities occur, such as feeding and dust bathing. Diurnal rhythms prompt the entire flock to do these activities around the same time. To explore this further, the researchers decided to look closer at melatonin data. High levels of melatonin should be produced at night, while low amounts should be produced during the day. In order to see how much melatonin the birds produced, samples were collected throughout the day. They saw clear rhythms at 14 and 17 hours of light.

“Twenty hours still provided a rhythm, although it wasn’t quite as strong,” she said. “But at 23 hours, we actually had the highest amount produced outside of the dark period, so it tells us that individual birds are cycling and they’re all cycling on their different rhythms – so there’s no flock rhythm in melatonin production at all.”

Evidence points to the fact that birds may even suffer from sleep deprivation under systems with 23 hours of light. While birds do sleep during the day, it’s possible that the quality of their sleep is poor, and that they are continually being woken (sleep fragmentation). Behaviorally speaking, Schwean-Lardner said they noticed specific flock rhythms under the systems with 14 and 17 hours of light, but none under the system with 23 hours of light. Under the 20-hour system, a very weak rhythm appeared.

A useful tool
In the appendix of the new code, Schwean-Lardner said there are recommendations for how to make lighting programs work better. “We suggest they do it in a gradual format by making light changes maybe an hour a day, for example,” she said. “The birds seem to not be as stressed when you make changes gradually.” The best solution, she said, is a dawn-to-dusk lighting system, which slowly increases light and allows the birds to wake up more gradually.

While, traditionally speaking, producers thought that constant or near-constant light maximizes growth, all of Schwean-Lardner’s results show that this is wrong. In fact, the only downside she saw from switching to a longer period of darkness is that it shifts where muscle is deposited in the body. What this means is that the birds actually produce slightly less breast meat and more dark meat.

But this shouldn’t be a problem for Canadian producers because they are paid on bodyweight. Increasing dark periods in the barn not only improves overall health and welfare, but also may increase crowding at the feeder. This is where dawn-to-dusk lighting systems are most beneficial, as birds wake up gradually, reducing pressure at the feeders.

Code requirements
The Code of Practice for the Care and Handling of Hatching Eggs, Breeders, Chickens and Turkeys includes the following lighting requirements.

Chicks and poults must be provided with a minimum of one hour of darkness in each 24-hour period after 24 hours of placement.

The dark period must be gradually increased to a minimum of four hours in each 24-hour period by day five.

From day five of placement through to no sooner than seven days prior to catching, birds kept in barns must have a dark period of at least four straight hours in each 24-hour period.

Light intensity must be adequate during the light period to allow birds to navigate their surroundings and for daily inspections (e.g., 5 to 10 lux). Light intensity may only be reduced temporarily to correct abnormal behaviour.

Light control systems must be inspected regularly and maintained in working order.