It could help feed humanity in future 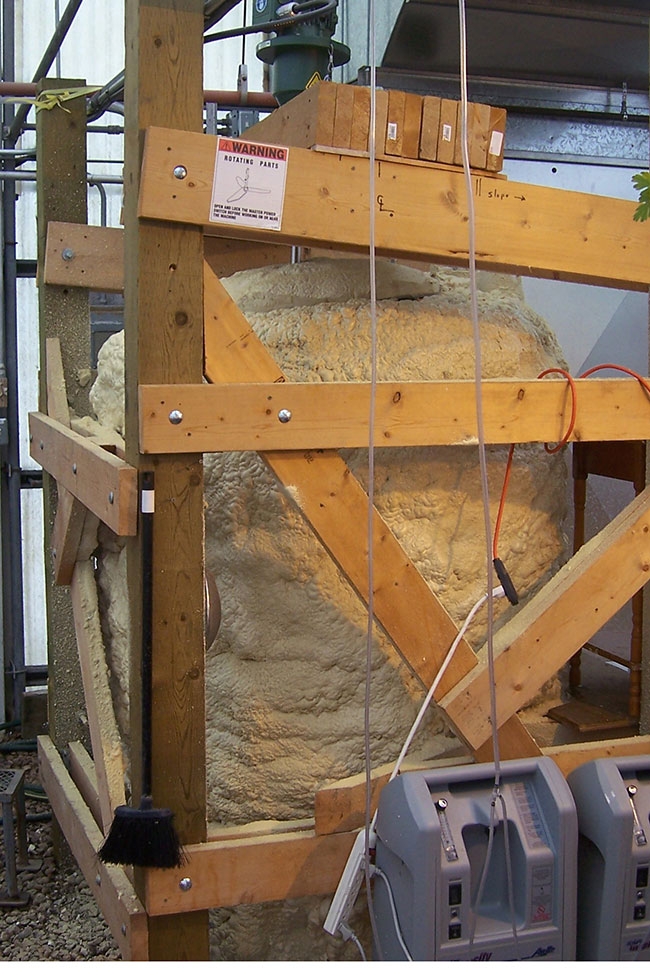 “The fact is that if we don’t learn how to recycle nutrients and water, we are doomed. We will start dying off from hunger. This is just one approach to prolong our existence on this planet.”

By recycling nutrients and water, he means extracting the valuable nutrients from waste streams like poultry manure by using microorganisms in an oxygen-rich environment within a device called a bioreactor to mineralize and dissolve the nutrients in a liquid solution. The nutrients can then be re-used as plant food. Savidov describes this as a sustainable approach to agriculture that could help save humanity from starvation down the road.

Tapping into this source of organic fertilizer from aerobic bioreaction is critical to continued human life on Earth, says Savidov, because current synthetic fertilizer sources are non-renewable. For example, he says that according to the most recent survey by the International Fertilizer Development Centre (IFDC), 85 per cent of all phosphorus rock reserves on the planet, which are used to produce phosphorus fertilizers are located in just one area – in Morocco and the Western Sahara. Also, current nitrogen synthetic fertilizers can only be produced using non-renewable fossil fuels. Sources of synthetic fertilizers now in widespread use are a finite resource that will eventually run out. Nutrient and water recycling to capture these same nutrients from animal waste streams offers hope to feeding humanity in future.

He is working with an AARD research team, which includes engineer and system designer, Marc Legault, to demonstrate the use of an aerobic bioreactor to mineralize nutrients from raw poultry manure. They used the dissolved organic fertilizer, called  “digestate” to grow market garden vegetables and tree seedlings in a soil-less growing environment. So far, the results have been highly successful.

For example, seedlings of lodgepole pine and white spruce fed with this mineralized organic nutrient stream, “doubled in height after two months. The results exceeded all our expectations,” says Savidov.

The organic fertilizer was also used to grow greenhouse tomatoes, and a 15 per cent higher yield was achieved versus use of synthetic fertilizer because of enhanced nutrient uptake by the plants.

“We demonstrated that we can produce vigorous growth of major nursery crops grown in Alberta and B.C., using poultry manure digestate,” says Savidov.

It is common practice right now to grow market garden vegetables and tree seedlings in greenhouses that use no soil, where the plant roots are immersed in liquid environments and fed computer-controlled, metered amounts of synthetic fertilizers to promote growth. But these Alberta researchers want growers to consider using mineralized organic fertilizers extracted from animal waste instead of synthetic fertilizers because it is a more sustainable form
of agriculture.

What’s different and proving more beneficial by using recycled organic fertilizers instead of synthetics is that they are biologically active with beneficial microorganisms. In addition to exceptional growth over a short period of time, the tree seedlings also experienced enhanced root biomass development, robust health such as better resistance to root pathogens, and improved nutrient uptake, meaning that they experienced exceptional growth in low nutrient solutions. In other words, growers can use small amounts to achieve big results, which could be a huge economic benefit. Furthermore, the water used in these soil-less growing systems is recycled so that there is less pollution released to the environment, and the grower achieves greater water use and nutrient uptake efficiencies.

Researchers chose to work with poultry manure as their raw material because it was readily available, rich in nitrogen, and less fibrous than cattle manure, which because of its fibre content, takes longer to ferment. The processed poultry manure resulted in organic fertilizer with low sodium content, which can be toxic to plants in higher concentrations, and pH within the tolerable range for plants.

The researchers’ goals were to prove that it is possible to create a liquid, biologically-active, organic fertilizer from raw animal manure using their aerobic fermentation method and that plant response from this organic fertilizer in a soil-less growing environment is as good as or better than the use of synthetic fertilizers.

Savidov says it is possible to extract valuable nutrients using their bioreactor system from all forms of animal manure or other food and agriculture by-products but they started with poultry manure. Ultimately, converting manure to a liquid nutrient stream using their bioreactor technology could represent a new income stream for farmers like poultry producers, as well as a non-synthetic, biologically active, fertilizer source for growers. The conversion process also produces heat, which can be used to heat poultry barns.

An aerobic bioreactor is not expensive, space-age technology. It is easily achievable, relatively inexpensive technology. The bioreactor is simply a septic tank with a built-in agitator. Oxygen and water is added to the tank along with the manure to create a slurry. Intense mixing within the tank is critical to maintain consistent fermentation. Savidov says there is no odor during the reaction process, except when the raw manure is added because oxygen reacts with common odor-causing compounds like hydrogen sulfide. Because all components within the raw manure will completely mineralize over different time intervals, there will be some solid material left in the liquid outfeed stream after three weeks. After about three weeks, the bioreactor is stopped and the processed liquid is removed to a filtration tank. The solids are separated from the liquid and returned to the bioreactor for further fermentation, while the liquid stream is ready for use as organic fertilizer.

“To be honest, it’s not really an absolutely new system,” says Savidov. “It’s using bits and pieces of what is already used in the agriculture industry for manure treatment.” He adds that greenhouses and nurseries would have to change very little to convert from synthetic fertilizer use to this type of organic fertilizer.

The researchers hope that aerobic fermentation of animal manure into organic fertilizer will become a common practice, either on farms, by commercial organic fertilizer producers, or directly at greenhouses or tree nurseries. It is currently used in some parts of Europe to treat cattle manure.