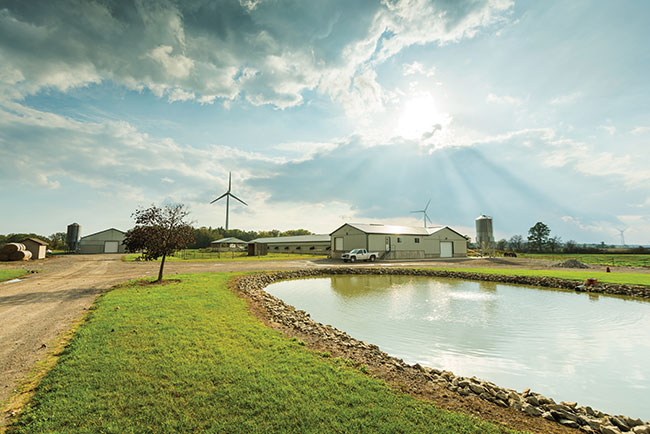 LRIC has been pushing for a balanced message about the sustainability of the poultry industry.

Thanks to the growing public interest in how food is produced, farmers are now often told that they must take charge of telling their story or someone else will do it for them. That’s happening now with livestock, poultry and climate change, for example.

The frequency of media articles pointing the finger squarely at the livestock industry – and this includes poultry – with statements like “livestock are the most dangerous technology on earth” is increasing, and much of the coverage suggests the solution is reducing or eliminating animal agriculture altogether.

There’s no doubt that livestock production contributes to greenhouse gas emissions, but it also produces highly nutritious food and supports carbon sequestration and biodiversity, and its by-products are widely used in many applications world-wide.

The industry has definitely made environmental progress and, although individual sectors are trying hard to publicize that progress, it’s often hard for good news to grab a fair share of media, government or public attention.

Livestock Research Innovation Corporation (LRIC) has begun promoting the need for documenting and sharing the importance of the livestock industry to Ontario’s food security, environment and economy.

“Issues like climate change or greenhouse gas emissions impact the entire sector and are bigger than a single commodity organization – and we need to remember that the public doesn’t see us the way we do,” McMorris says.

Ian Ross, president and CEO of nutrition company Grand Valley Fortifiers, is chair of LRIC’s Emerging Issues Committee, which monitors trends and developments that have the potential to impact the future of livestock production.

“As an industry, we need to work together, stop competing with each other on protein consumption and talk about the importance of livestock in the ecosystem and in the context of food security,” he says. “We have common business and industry risks, and there are a lot of major forces at play here that are moving against all of us, so let’s work on those challenges together.”

With the input of its member organizations, LRIC has been leading the development of an Ontario Livestock Declaration to encourage greater collaboration and more cohesive messaging around the importance of livestock production.

A balanced message about the sustainability of the industry could include greenhouse gas emissions per serving of balanced protein; responsible animal care and One Health considerations; impact on soil health, biodiversity, and the environment; and domestic food security, for example.

Reporting on the industry’s progress in these areas will play an important role in supporting that balanced messaging. Many individual sectors are already being proactive in dealing with many of these topics, but the key to making the results resonate will lie with a collective approach, believes McMorris.

“A comprehensive livestock report card of sorts, which pulls together all of our sector-specific information and achievements into easy-to-understand statements of the industry’s importance and of the progress we’re making in sustainability would be powerful,” he says.

The audience includes government, which McMorris and Ross both suggest needs to know that the livestock sector is a vital contributor to the economy and domestic food production that is also taking action on environmental issues.

“A lot of one-sided science is trying to indicate that the best thing for the world is to get rid of all livestock, but there is collateral damage when things aren’t thought through,” Ross says. “There is no way that any individual producers or sectors can influence this, so let’s work together to communicate the importance of our industry.”