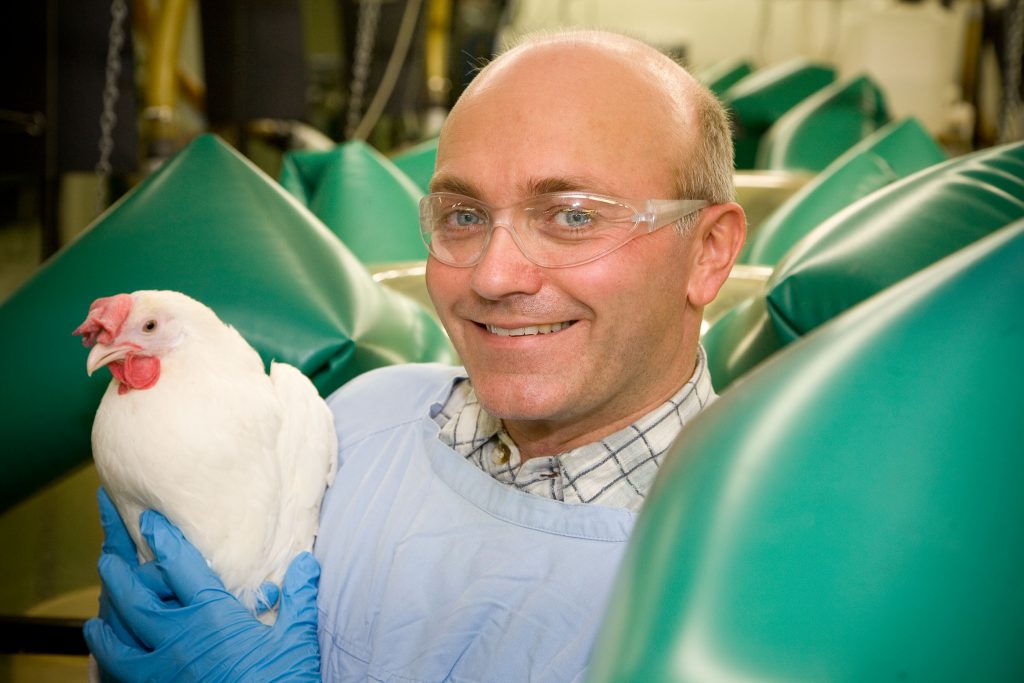 Mark Tizard of the Australian Animal Health Laboratory has recently looked at the potential benefits of genetic editing for poultry farming.

Five years ago, the Food and Drug Administration in the U.S. approved a transgenic chicken.

It won’t end up on anyone’s dinner plate though; rather, the bird was genetically engineered so that its eggs would contain an enzyme that can treat a rare metabolic disorder in humans.

Changes in DNA code, which is what gene editing does, happen naturally over time, resulting in species diversity. Breeders have long used selection (“best begets best”) to make genetic improvements, but it’s a very slow process.

Modern gene editing, by comparison, allows genetic material to be added, removed or altered at particular locations in the genome to create very precise changes in an organism while improving both the speed and accuracy of breeding.

Research by Mark Tizard of the Australian Animal Health Laboratory at the Commonwealth Scientific and Industrial Research Organization (CSIRO) has recently looked at the potential benefits of this technology for poultry farming.

Selective breeding has led to dramatic changes in production, efficiency and product quality of both meat and eggs, but traits related to disease and welfare outcomes have been harder to alter. According to Tizard’s study, these are two areas that influence both production and public perception of the industry and its products – and gene editing provides the potential for making changes in these areas.

Key target applications include strengthening birds’ disease resistance and early sex detection of eggs destined for the layer sector. Other applications that are more directly related to human health address the allergenicity of eggs and improving eggs as a substrate for vaccine production.

Work on all of these is underway in some capacity to date. Scientists at the Roslin Institute at the University of Edinburgh, for example, are working on chickens with complete resistance to avian influenza by making gene edits that affect proteins essential for the flu virus to thrive.

This could prevent the crossing of influenza virus from wild birds into first poultry and then, ultimately, humans – addressing a major global concern around the health catastrophe potential of a human flu pandemic stemming from birds.

Another way to protect humans from influenza is through vaccination, but it can be hard to produce enough vaccine – which is grown in eggs – to meet demand. Up to two eggs are needed for a single dose of vaccine, so a team at CSIRO is using gene editing to produce a premium, high yielding egg that would increase vaccine growth tenfold. That dozen eggs that produces six doses of vaccine today would yield 60 doses!

The World Allergy Organization counts eggs among the leading food allergens, particularly in children. Creating allergen-free eggs would address this problem, which is another one of the projects the CSIRO lab is currently working on.

According to Tizard, one of the proteins in egg white, ovomucoid, is the editing target of their work. That’s because it’s the most allergenic of the egg white proteins and has no clear role to play in fertility, egg formation or nutritional value of table eggs, so non-allergenic eggs would be expected to be fertile and fully nutritious.