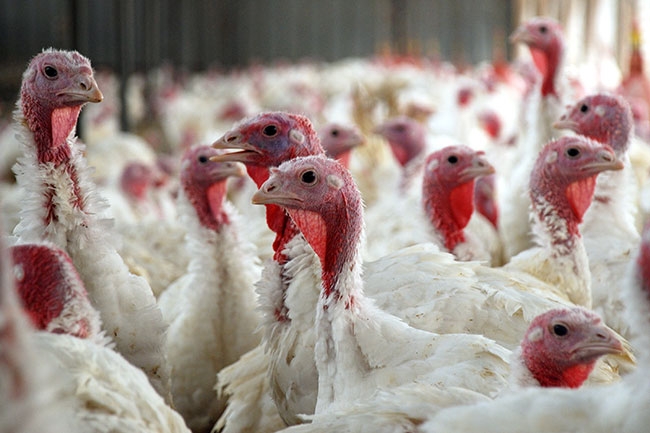 Research at the University of Saskatchewan is examining how stocking density impacts turkey production.

High stocking densities significantly impact the health, welfare and performance of tom turkeys. That’s according to newly completed research by Dr. Karen Schwean-Lardner and master’s student Kailyn Beaulac at the University of Saskatchewan’s department of animal and poultry science.

“Most research related to stocking density in turkeys was done in the 1990s or before, and since then we’ve seen birds, target weights and growth rates change substantially,” says Schwean-Lardner, an assistant professor of poultry science.

The project encompassed two trials, each 16-weeks long, which were completed using four different estimated final stocking densities – 30, 40, 50 and 60 kilograms per square metre of floor space. Over both experiments, each treatment was replicated four times.

Each trial included about 1,400 birds, for a total of approximately 2,800 birds in the study. Various measurements were collected throughout. Examples include feed consumption and body weight at four, eight, 12 and 16 weeks of age, and chronic stress measures at four, 12 and 16 weeks. Other scoring at various age intervals included footpad lesion score, bird mobility, feather condition and cleanliness and bird behaviour.

Birds were housed in individual, ventilation-controlled rooms for each density level, with increased ventilation in higher density rooms with the aim to equalize air quality across all rooms. The researchers recorded temperature and humidity daily.

“We spent a lot of time doing air quality measurements, measuring three times a week for carbon dioxide and twice weekly for ammonia,” Beaulac explains. “We then increased or decreased ventilation depending on the readings.”

“The biggest overall behavioural change we noted is that as stocking density increases, birds are less mobile and less active overall, which impacts their health,” Beaulac says.

According to Beaulac, another interesting observation related to aggression amongst the toms. Aggression levels were higher for younger birds at higher densities, whereas older birds were more aggressive in the lowest density tested (30 kg/m2).

“We’re trying to look at this issue from a broad spectrum and include all production and welfare data, to get as complete a picture as possible,” she adds.

With the project complete, both researchers say more research needs to be done on younger birds before any concrete recommendations can be made for turkey farmers.

“We don’t know exactly what that stocking density number should be yet, but our results do suggest that a moderate density would be best for the birds compared to either low or high stocking density,” Beaulac says.

This project was funded by Canadian Poultry Research Council and Agriculture and Agri-Food Canada through the national poultry research cluster, as well as by Aviagen Turkeys Inc. and Charison’s Turkey Hatchery Ltd.