LRIC Update: Shining the light for safety and quality 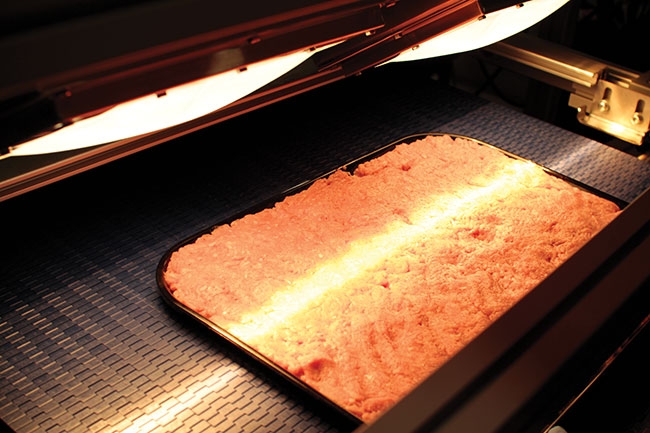 A Waterloo, Ont.-based company is using a combination of physics, chemistry and artificial intelligence to gain a better understanding of poultry meat and help boost food safety in processing facilities.

And those are only two of potentially multiple applications for hyperspectral imaging in the poultry industry.

P&P Optica (PPO) has developed Smart Imaging System that shines light on food items as they pass through food processing production lines. Light reflecting off the food’s surface is captured and read by a spectrometer that takes a pixel-by-pixel view of what it’s seeing and communicates that to artificial intelligence engines for analysis.

“This analyzes all the captured data to tell us the chemical properties of the food item so that we can make decisions about it,” explains Heather Galt, vice president of marketing, adding that one popular application for the technology in poultry plants is finding foreign objects.

“Hundreds of thousands of pounds of chicken daily are inspected by people, metal detectors and cameras and because we can see chemistry with hyperspectral imaging, we can actually see foreign objects that look like meat but aren’t,” she says. “For example, clear or white plastic can look like fat but because it doesn’t chemically look like chicken, our system will find it.”

It is also able to find items like wood, plastic or rubber that are undetectable by either x-rays or metal detectors. Now being deployed in various poultry facilities in North America, PPO’s technology can also provide information on the fat-lean-protein composition of meat, and work is underway on an application that can identify tenderness the same way.

“Typically, our customers come to us because they’ve had an incident with a foreign object and want to improve surveillance – recalls are expensive, with impacts to the brand and lost productivity,” Galt says. “But in almost every case, they’re also looking at quality; fat, lean, protein and water content can all have an impact on how tasty poultry is and how well it cooks.”

In February, Export Development Canada (EDC) announced a $1 million investment into P&P Optica to help further develop its technology as well as expand into international markets beyond Canada. According to the company, Smart Imaging System is the industry’s first complete solution for detecting, grading and sorting food, in-line and in real time.

Another homegrown success story is Hypereye, a patented scanning technology developed by McGill University professor Michael Ngadi that can identify gender and fertility of day-old eggs. This could mean an end to incubating male and infertile eggs and culling of male chicks.

Poultry Industry Council and Egg Farmers of Ontario have supported this research and Livestock Research Innovation Corporation is now partnering with EFO to commercialize the technology. Testing of the system is currently underway in Ontario hatcheries.

Also in egg production, Chinese researchers have found that hyperspectral imaging technology can be used as an accurate, non-invasive way to detect cracked eggs and predict colour and shell strength.

Research by the United States Department of Agriculture shows that hyperspectral imaging can be used to speed up the detection of pathogens like campylobacter, a major cause of bacterial foodborne illness in humans. Different bacteria can look very similar when cultured on solid media, but hyperspectral imaging can identify microorganism’s unique fingerprints that aren’t otherwise visible.