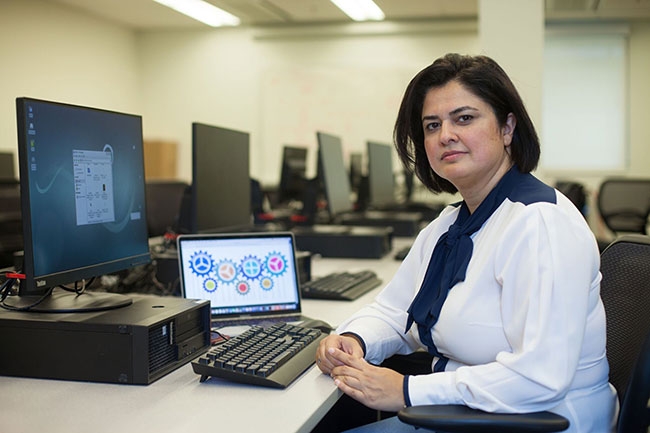 “The earlier we detect (an outbreak), the better and more precise our actions can be.”

The poultry industry is harnessing the skills of University of Guelph computer scientists and their artificial intelligence expertise to get a better idea of when and where avian influenza might next emerge.

Professor Rozita Dara and her computational sciences PhD student Samira Yousefi are mining social media for clues that could help establish correlation between what is talked about by Twitter users and what is reported through actual surveillance and diagnostic activities by the World Health Organization, the World Organization for Animal Health and others.

The ultimate goal is to help authorities with disease prevention and response and policy making, and while online surveillance has been used for human influenza, less work has been done on the avian form of the disease.

“The earlier we detect (an outbreak), the better and more precise our actions can be,” Yousefi explains, adding this could help avoid tools like mass vaccination or mass culling that are currently widely used disease response measures.

Using a list of keywords related to avian influenza generated by the researchers, an automatic system crawler searches Twitter continuously 24 hours a day for a whole year to gather information and populate a database.

Non-avian influenza and spam posts have to be filtered out using an artificial intelligence algorithm and the system is intelligent enough to learn which data was relevant as it goes along. Now the research team has a clean data set that shows how many tweets each day were posted about avian influenza.

“This system is hugely robust and can gather a lot of information without human engagement in the process,” Yousefi says, adding the system will improve as the machine becomes smarter. “There are so many features that in the future we could customize to language, geographical areas or countries.”

The team did find a surge in Twitter activity around confirmed outbreaks, proving that it is possible to use Twitter data in a predictive fashion. Avian influenza is a reportable disease, meaning farmers have to let authorities know if they find it on their farm, but many other diseases have no reporting obligation.

“If farmers share data or information on Twitter for diseases that aren’t reportable, like reovirus or infectious bronchitis, we can use this technology to identify disease emergence,” explains pathobiology department chair and poultry researcher professor Shayan Sharif, a project collaborator who is providing poultry disease expertise to Dara and her team.

Yousefi’s work also involves developing models that allow for simulation of disease spread between farms based on bird movements to establish regionalized degrees of risk. This will help policy makers decide what type of control or preventative action should be taken.

The ultimate goal, according to Sharif, is to pull all the pieces together into a decision support system empowered by artificial intelligence that is able to integrate the different layers of data for early detection and early intervention of avian influenza. Social media is one data source, but so are migratory patterns of birds, trade relationships and weather impacts.

“Right now we don’t have a good handle on how to precisely control and get rid of the disease and mass response is the best we can do,” he says.

This research, conducted in collaboration with Dr. Zvonimir Poljak of the department of population medicine, is supported by Food from Thought, Egg Farmers of Canada, Chicken Farmers of Saskatchewan, Canadian Poultry Research Council and the Ontario Ministry of Agriculture, Food and Rural Affairs – University of Guelph partnership.