Popularity growing rapidly due to aggressive positioning as being “cleaner and healthier”. 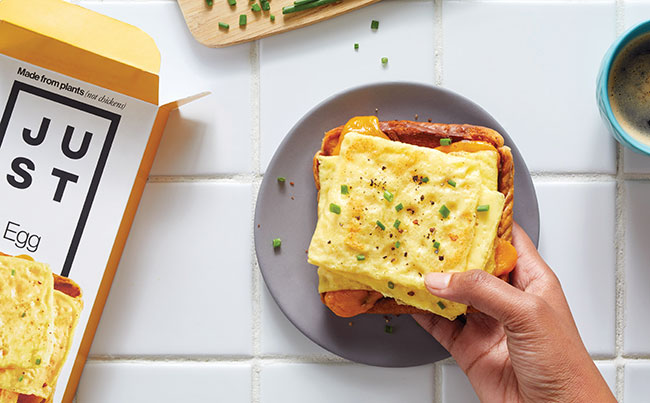 Plant-based eggs, like JUST Eggs made from mung bean, are one form of alternative protein.

Alternative protein options have been small players in the food world. In the last several years, though, their popularity has been growing rapidly, thanks in part to aggressive positioning as being “cleaner and healthier” than animal-based products. They are also being promoted as one of the key solutions to climate change and, with many climate-related disasters making global headlines this year, that trend is likely to continue.

According to David Coletto, founding partner and CEO of Abacus Data, Canadian consumers (especially Millennials and Generation Z) will be making more climate-friendly food choices. Of interest to the livestock industry is that this includes eating less meat, which 58 per cent of consumers do for health reasons, 43 per cent because of animal welfare concerns and 37 per cent to lower their carbon footprint.

“One out of five Canadians thinks about climate change all the time and as this concern grows, so, too, will carbon neutral diets, which creates an impetus on producers to answer how they are reducing their carbon footprint,” he said during a presentation to the Farm & Food Care Ontario annual conference earlier this year.

Defining alternative proteins
So, what exactly is an alternative protein? It includes lab-grown/cultured meat (also known as cellular agriculture), precision fermentation that creates animal-based proteins without animals, as well as the more traditional plant-based meat, egg, and dairy alternatives. Changing technologies and ingredients are making these types of products tastier, cheaper, and more versatile than in the past.

Tom Rossmeissl is head of marketing at Eat Just, a California start-up that sells an egg alternative made of mung bean in Canada, China, Hong Kong, Singapore, and the U.S. It’s also the first company to be selling cultured chicken, which was launched in Singapore in December 2020.

The term “plant-based” carries positive connotations in terms of taste and health, but appeal and cooking versatility are also important characteristics for consumers. With cultivated meat, Rossmeissl says the “slaughter-free” aspect is important, as are the no antibiotic and growth hormone-free labels, and the idea of a more sustainable alternative.

“We extract cells from a living animal and feed the cells the same kind of nutrients you give an animal, like lipids, water, nutrients and amino acids, to produce the final product,” he explained while speaking at the recent Future Food-Tech Alternative Protein Summit. “We only grow the meat you eat, not the whole animal or bird and as we scale, the promise of this technology is to find a more sustainable way to eat meat.”

Speaking at the same conference, the general managing partner of global venture capital firm that supports tech start-ups predicted that animal-based agriculture will ultimately become a luxury item accounting for approximately 10 per cent of the market. The rest will be made up by plant, cellular and precision fermentation-based products.

Taking action
These comments, along with those pointing the climate change finger squarely at agriculture, are what gets the attention of Livestock Research Innovation Corporation CEO Mike McMorris. Frustrated by the lack of credible and balanced information on topics like climate change and alternate proteins, LRIC launched its Horizon Series of white papers and webinars earlier this year to tackle key issues facing the livestock industry in collaboration with noted experts in the field.

“It’s very important for the livestock industry to be aware of what is being said about our production practices and our products so that we know what we are up against and where we can continue to make improvements,” McMorris says. “We know that the livestock industry has made big strides in reducing its environmental footprint and that we are an important part of climate change mitigation, but the challenge lies in getting those messages in front of the public.”

This article is provided by Livestock Research Innovation Corporation as part of LRIC’s ongoing efforts to report on research developments and outcomes, and issues affecting the Canadian livestock industry.