Keeping the birds cool is essential for preventing production losses 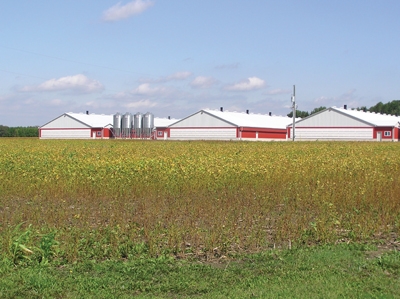 Handling Heat. When the temperature rises, birds can’t release heat as effectively, and a natural response is to take in less feed. This affects growth and profitability (and even death), so assisting the birds with cooling is essential.

Heat stress is a serious concern in poultry farming and sprinklers provide one way to control it. Before we look at how putting water droplets on birds works to cool them, let’s do a quick refresher about how heat stress affects chickens and how they naturally cool themselves.

A substantial amount of any feed energy an animal or bird takes in goes towards keeping the organism’s body temperature steady. In the case of cold environmental temperatures, that heat is needed to keep the bird warm (but some heat is always lost as well). In high temperature/high humidity conditions, birds can’t release heat as effectively, and a natural response is to take in less feed. This affects growth and profitability.

A chicken typically uses two natural pathways to cool down, says Dr. Yi Liang, an assistant professor in the department of Biological and Agricultural Engineering at the University of Arkansas. The first is known as sensible heat dissipation, where a little heat from the chickens is removed by conduction (transfer of heat when two objects touch) and substantially more heat is removed through convection/radiation (transfer/removal of heat into the air). “For chickens with no sweat glands, they highly rely on the respiratory system [to cool themselves], which is breathing or panting in very hot conditions,” Liang said in an interview with sprinkler manufacturer Weeden Environments, based in Woodstock, Ont. This process is known as evaporative heat loss. The exhaled air is higher in humidity (from being in the chickens’ lungs) than the air they breathe in, and the drier the surrounding air, the better the process works.

Very dry air is the norm in poultry barns with sprinkler systems, says Dr. Tom Tabler, the Applied Broiler Research Unit Manager at the University of Arkansas’s Avian Advice Center. “The temperature [can be] very high, which scares a lot of people, but the air is also very dry,” he said in an interview with Weeden Environments. In other words, a sprinkler system is more focused on cooling the birds than their environment. Tabler also points to the cooling “wind chill effect” that occurs with the use of sprinklers. With good ventilation, the water sprinkled on the birds is quickly evaporated, cooling them effectively.

He added that some of the other cooling effect of sprinklers stems from “the fact that these chickens . . . are all producing thousands of BTUs’ worth of heat that basically, as long as they’re sitting [on the barn floor], stays trapped.” He notes that sprinkling them with water causes them to get up and move around so that the fans can remove some of the heat from the floor area. “They feel this cold water hitting them, they all get up . . . and the fact is that when they do get up, they go get something to eat, and they go get something to drink,” he said.

Users of Sprinklers
The three barns housing 60,000 broilers at Pittens Family Farms near Cambridge, Ont., have featured sprinkler systems (Weeden) for many years – two of the barns for 10 years and the third new barn since it was built seven years ago. “It’s a very simple system, there when I need it,” says farm manager Will Law. “It gets the birds off the ground and that’s what cools them off, getting fresh air under them.” He uses sprinklers in June, July and August. “I have tunnel ventilation and there’s enough air going through to cool them unless it’s really hot,” Law says. “I use the sprinklers when it’s really hot for many days in a row and the birds are old enough at that point in the cycle. I don’t put water on birds younger than four weeks of age.”

Sprinkler companies provide detailed guidelines about how to decide on frequency, but Law says he “doesn’t use a particular formula or anything. That’s the toughest part, is deciding what frequency to use. You have to be careful that you don’t put it on too often or they’ll get used to it and won’t move around. Turning them on for 30 seconds every five minutes is the maximum I’d put them on. I try to stick to every 30 minutes.” He says almost all the water lands on the birds in coarse droplets, and it evaporates right away and never puddles, no matter how often he has the sprinklers running.

In terms of cost return, Law notes that a farmer might go through a cool summer and not use the system at all, but in the first three to four days of a hot period, “it’s paid for itself because you avoid the losses that come from the birds eating less or not eating.” He says sprinklers are the cheapest source of heat relief he knows of, and that with sprinkler use, he doesn’t have to purchase heat prostration insurance on his birds. The system’s maintenance is easy, in Law’s opinion. “I drain it in the fall before the temperature gets to freezing, and I might have one or two nipples clogged in the spring (I have hard water), and I just soak them in CLR,” he says. “I’ve never cleaned the lines.”

Weeden Environments president Kevin Weeden says it’s always a good practice to clean the water lines in any system, but that water lines used for cooling obviously do not have to cleaned with the same diligence as those containing water consumed by birds. “Even though the sprinklers are designed not to plug or drip, water with higher mineral content may require periodic removal of calcium-lime buildup,” he adds.

How much water is applied in total on a given summer day depends on the temperature (potential heat stress on the birds) and the size of the barn. “One 20-second sprinkling equals five gallons/20 litres in a 20,000-square-foot barn,” says Weeden. He notes that a 10-year study in the U.S. has shown that over the life of a flock, a sprinkler system uses about half as much water as a fogging system. “One sprinkler unit emits 10 ounces of water over an area of about 450 square feet, which almost all lands on the birds, with very little landing on the litter,” he adds. Weeden says that because more air movement in a barn provides better evaporative cooling of the dampened birds and more opportunity to move air around the floor area once the birds have moved due to sprinkler operation, tunnel-ventilated barns are ideal, but side-vented barns with circulating fans also work well.

Paul Dietrich, owner of Dietrich Farms Inc. near Stratford, has 19,000 broilers in a barn with sidewall ventilation. He says he decided on installing a sprinkler system and chose Weeden because “everyone I talked to was happy with them and said it’s low maintenance. I’ve had them for seven years in the chicken barn and I liked them so much, I put them into our finishing hog barn.” Since he’s had sprinklers, Dietrich has never had to take his birds off their feed when the weather gets hot. “I’ve never not made my weight, even with stretches of five days of 30°+ weather right before shipping them out,” he says. “The two summers before I had sprinklers, I had 2,500 dead chickens in the July cycle. I’ve only ever lost a few birds [to heat stress] since then, and that’s because I didn’t have the sprinklers running often enough.” The most he’s ever run the system is for 40 seconds every two minutes.

For more information on heat stress and the use of sprinkler systems, visit: http://www.youtube.com/user/pamzehr1
Or watch the video below.