From the city to the turkey farm, a young couple finds success. 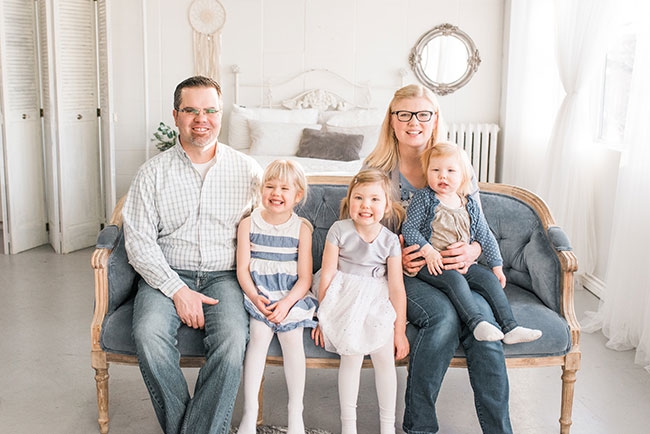 Marc and Hinke Therrien and their three daughters, Annelies (5), Emilie (4), and Natalie (2), live south of Redwater, Alta., on their turkey and broiler farm. Photo courtesy of Deanna C photography

There’s no better way to learn than getting your hands dirty… something Alberta turkey and broiler producers, Marc and Hinke Therrien know all too well. Being adaptable and learning on the job has played a major role in the young couple’s success.

Within a five-year span Marc went from the city, to working in the private sector, to having a privately-owned farm. Together, Marc (36) and Hinke (33) have worked through a succession farm transfer, overcame a barn fire, decreased their on-farm mortality rate and through hard work and innovation doubled their turkey production every year for the past five years.

“This was a steep learning curve and included taking over two farms with severe and different health challenges, turning them around to decrease both farm’s average mortality to about half of what is industry standard,” Hinke says. “We are both passionate about what we do – producing food for the everyday consumer, taking care of livestock and the science behind the stockman ship.”

Today, the Therriens produce 120,000 turkeys and up to 150,000 chickens annually on their farm, which sits on the edge of Sturgeon County, just south of the Town of Redwater in Alberta.

“It depends on the flock, but at any point in time we average 40,000 turkeys and 34,000 chickens in our eight barns. Toms are raised for 16 weeks, hens are raised for around 12 weeks.  The broiler cycle lasts around 36 days.”

Through adversity
Marc grew up in the city, Hinke on her parent’s dairy farm in the Ponoka area. They met in a dairy production class during their time in the University of Alberta’s animal science program. After graduation they both began careers in the feed industry. Marc initially broke into farming when he took on an assistant manager job at a large broiler farm.

“In 2012, the Pine Valley Family farm had a sudden change in management and we were offered the opportunity to rent the farm and run it for a max of two-year term, to which we jumped at the opportunity,” Hinke explains.

In 2013, as they began to work through the succession process with Hinke’s parent’s Redwater farm, a fire erupted and burnt down two of the farm’s main barns. “A fire is a very stressful and traumatic time but, for us, it was also a blessing in disguise. We were able to redesign the farm as to how we would like it to run. It really was a good opportunity for us,” Hinke says. “Coming from a city background, Marc had zero experience, so this really forced him to take an active role in barn design, electrical and plumbing. It was a steep learning curve but a great opportunity early on in our careers.”

When it comes to building a new barn, they suggest producers take their time and do lots of research, and make sure you pay attention to the structure of the building as much as the equipment inside. Throughout the rebuild the Therriens’ focused on energy efficiency, equipping the attic with thicker insulation, LED lighting and state-of-the-art barn controls.

“We have moved towards a two-stage infrared heating system in the brooder barn. The heater is completely sealed unit with fresh air intake and exhausted outside the barn. This type of heater promotes a dryer environment with no CO2 exhaust in the barn. The two-stage heaters in conjunction with variable speed fans and LED lights allows the barns to run with as little heat loss and energy waste as possible while still maintaining the ideal barn environment for the turkeys.”

By 2014, the young couple had completed barn construction, the amalgamation of two turkey operations, and the succession process. “Through amalgamation of the two turkey farms over the last few years, we have been able to increase production and maximize our production efficiency on one large farm. There have also been some extra kilograms in Alberta to lease into the farm, which helps keep the barns full,” Hinke says.

In 2016, they continued to reinvest in the operation by renovating an old summer turkey barn, turning it into our new straw and equipment shed. “Biosecurity continues to be a key management tool on the farm and ensuring our straw stays dry, mould free and protected from wildlife is very important for our birds’ health.

“The largest change has been the Maximus computer controllers in the barns. These app-based controllers manage every aspect of the barns. Turkeys, and poultry in general, prefer a steady state environment. These computers allow us to optimize this steady state and avoid the highs and lows of outside environmental factors and ensure the birds have optimum growing conditions at all times.”

Early on, the couple says they struggled with Bordetella and E. coli. But with changes to the cleaning and disinfecting processes, they have successfully eradicated the Bordetella. And continue to closely monitor for E. coli and clostridium. “It is critical to ensure low stress environment through proper clean water, dry/clean bedding and good ventilation for optimum bird health,” Marc says. “One of our biggest achievements has been our liveability. When we took over the farms, they had about 20 to 25 per cent mortality and we have been able to reduce that to only 10 per cent through new Standard Operating procedures to improve the health and welfare of the birds.”

An additional two water-tight manure storage facilities were also installed and has helped to control run off and improves the environmental farm plan.

In 2017, the couple were recognized with the Outstanding Young Farmers’ program award for the Alberta/Northwest Territories region.

“We would like to congratulate Marc and Hinke on receiving the Alberta’s Outstanding Young Farmers Award for 2017,” says Maria Leslie, communications specialist with Alberta Chicken Farmers. “Both Marc and Hinke are great advocates for our industry – volunteering for the Classroom Agriculture Program, hosting farm tours, and being very active on social media to dispel myths and to tell our story. It is wonderful to see our producers acknowledged for their outstanding commitment to promoting our industry and supporting young farmers.”

Marc and Hinke Therrien and their three daughters, Annelies (5), Emilie (4), and Natalie (2), live south of Redwater, Alta., on their turkey and broiler farm.

Looking forward
On a larger, industry-wide scale, Hinke says there are a number of challenges facing producers right now, including the rising cost of production, carbon tax, international trade agreements and the fear of potentially displacing domestic production.

The growing disconnection between consumers and the farm is also a concern, something that has motivated the couple to get involved, volunteering at Ag events and hosting farm tours. “I am always amazed as to how inaccurate the poultry industry is portrayed, and I try to do my part on telling our story. We are a family owned and operated business, we eat the food we produce, follow rigorous programs for On-Farm Food Safety Assurance and Animal Welfare and are third-party audited. We are very proud of our industry and just love sharing our passion with others.”

Moving forward, the Therrien family plans to continue upgrading their farm with increased efficiencies, and hope to continue involving their three daughters, Annelies (5), Emilie (4), and Natalie (2), in the farm operations.