‘First of its kind’ facility for Atlantic Canada will provide consumers with a wider choice of locally produced egg products. 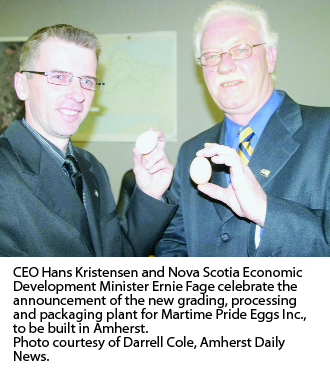 Egg producers in Nova Scotia and New Brunswick are welcoming the announcement of a new egg grading and processing facility to be built in Amherst, N.S.

Maritime Pride Eggs Inc. will soon centralize its operations in Nova Scotia and New Brunswick with a new egg grading and breaking facility.  Capable of handling and processing millions of eggs each year, this new facility will distribute table eggs and liquid egg products throughout the Maritimes.

New Brunswick producers are quite excited by the prospect of “cleaner access to markets and the economies of scale” the new facility will provide, says George MacLeod, vice-chairman of the New Brunswick Egg Producers.

Nova Scotia Egg Producers chairman Glen Jennings says, “We have been looking for a processing facility for years.”

Maritime producers must send their excess product to Quebec or Ontario for processing, so having a new plant in their own region will save on transportation costs and enable them to supply their market with products made in the Maritimes, says MacLeod.

Amherst was chosen for the location of the new plant because it is strategically located in the centre of the Maritimes, affording easy access for producers and to highways for customer shipments.

The new facility will be completed in two phases.  First, the company’s two existing egg grading stations will be replaced with one centralized, efficient plant.

Upon completion of the new egg grading station, an egg breaking plant will be developed on-site to further process eggs into liquid and other value-added products.

MacLeod says he looks forward to being able to supply the big-box grocery stores through an amalgamated supplier, as the stores prefer not to deal with multiple producers.

“Our producer-owned company has an open door policy,” says Kristensen. “We are capable of offering a cost-competitive alternative to any producer in the Maritimes.”

In order to further strengthen the company’s future market position, a partnership has been formed with Nutri-Oeuf, another producer-owned egg grading and marketing company based in Ste. Hyacinthe, Que.

While the announcement of the new plant was good news for the border town of Amherst, it will mean the loss of jobs at Maritime Pride’s existing facilities in Port Williams, N.S., and Keswick Ridge, N.B. Employees at those plants have been offered jobs in Amherst or the option of taking a severance package of job search seminars and a bonus of two weeks’ pay when the plants close.

The $6.4-million project is being assisted by the Office of Economic Development in Nova Scotia, who have provided a loan of $1.4 million, interest-free over three years. The company can also earn forgiveness on a portion of the principal of the loan if it achieves stated employment targets.

Construction of the new Amherst facility will start April 15 with operations expected to begin Nov. 1.