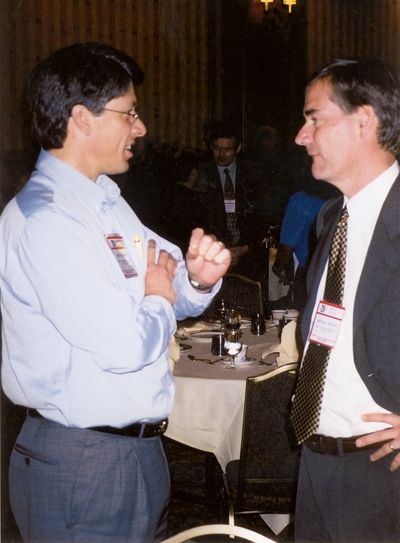 Michael McCain (R), head of Maple Leaf Foods, speaks with Mike Dungate, general manager of the Chicken Farmers of Canada, at the CPEPC conference held in Halifax in June. He told CPEPC members that food safety is about consumer confidence as well as science.

Michael McCain, head of Canada’s largest food company, Maple Leaf Foods, said Canada has a strong reputation around the world for food safety. This is a strength that the country should build on, he told the 53rd annual Canadian Poultry and Egg Processors Council convention in Halifax on June 9.

“Canada has a pristine image,” he said.

But Canada can’t afford to rest on its laurels. “We need to be world leaders,” he said.

Doing a great job will pay dividends because “consumers today care about food safety more than anything else.”

He also cautioned the audience that “Food safety is not about great science all the time. It’s about consumer confidence. Consumer confidence doesn’t come in a scientific bucket, it comes from what they believe in their hearts.”

In the pork market, Maple Leaf works diligently to differentiate itself from its American competitors. It does this because it has to.

While Maple Leaf looms large in Canada and is this country’s largest food company, McCain said “We consider ourselves the little guy – we are the 10th largest in North America.”

“In the global arena, size matters,” he said.

But in the poultry business Maple Leaf doesn’t have a global view. “We have no global view in poultry because the system won’t let us,” he said.

But he accepts that and believes supply management should be supported. It is a system that can provide fair returns to all stakeholders provided it does its job, he said.

He also said he believes supply management is a social policy and that “it’s not my job to deal with that.”

But that doesn’t mean the system is working perfectly – far from it.

“We feel the current system is not working properly,” he said.

The company, which has built its Canadian poultry operations to service a supply-managed industry, wants to help fix what’s wrong.

“Our first choice is to shore up the system and make supply management actually work,” he said.

A critical current problem is oversupply. “We don’t want to face a downturn of this magnitude again,” he said.

It doesn’t serve the industry well when processors are squeezed by over-supply and wholesale prices collapse. It undermines the basic goal of supply management, which is stability.

“We feel the existing system is not working properly and needs change. We need to make those changes together collaboratively as an industry,” he said.

“Stability and profitability is critical for us all and the health of the system,” he said.

Maple Leaf is committed to working constructively with all industry stakeholders to further improve and strengthen the effectiveness of Canadian supply management, he said.

He said the problems facing supply management include domestic over-supply and the lack of credible (real-time) data, reactive versus proactive market response, and provincial boundaries.

“Canada is a national market. Canada is small enough as a national entity let alone trying to subdivide it into regional fiefdoms,” he said.

All of these problems can be fixed if the industry works together, he said.

But he doesn’t think trying to employ free market measures in a supply-managed industry can work. “The whole supply system could implode.”

McCain said that while Maple Leaf is prepared for any outcome it would prefer to make the existing system work.

“If supply management went away we would survive and thrive. But that is not, I reiterate not, our first choice.”

Returning to animal health issues, McCain said the recent case of BSE in Alberta shows just how vulnerable an industry can be.

He also cautioned the poultry industry about complacency.

“You might think we’re protected from this by our supply management comfort zone in poultry; you cannot count on that.”

The keys are prevention through measures such as: HACCP; preparedness because “no matter what we can do we can never eliminate the possibility of food safety breeches”; and proof – we have to be able to prove we’re doing what we say we’re doing.