Features Producers Profiles Mike Pickard was new to Saskatchewan and new to chicken farming – but the new life he started around that time turned out to be the right one. More than 30 years ago Poultry Production

Award-winning broiler producer streamlines his operation and lends his time to industry boards. 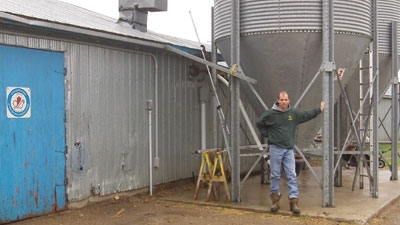 More than 30 years ago, Mike Pickard was new to Saskatchewan and new to chicken farming – but the new life he started around that time turned out to be the right one. “After finishing high school, a lot of young people were moving out West, so that’s what I did,” he says. “I’ve been married to a Saskatoon girl for 26 years, and for the last 25, we’ve had a broiler operation in Wynyard, Sask., where we produce over 800,000 kilograms of chicken every year.” Mike and his wife, Jana, have three children, with the youngest graduating this year from high school. The other kids are attending university, and Jana is the company’s accountant.

Although he was new to farming chickens a quarter century ago, Pickard had lots of other farming experience to draw on. “I grew up in New Brunswick and spent most of my summers on my uncle’s farm in the heart of the potato belt near Florenceville,” he explains. “I believe I acquired my love for farming from my Dad. He was a third-generation farmer, and he would tell me ‘don’t worry about getting dirty if the job calls for it – dirt washes off.’” Pickard adds with a smile, “I can’t remember how many times Mom would say to me, ‘those pants could stand up by themselves.’”

Starting out, Jana and Mike were able to draw on the broiler farming experience of Jana’s family. “We learned the dos and don’ts, and then from there, we just tweaked this and that,” Pickard says. The couple were obviously doing things right, and received the 2004 Saskatchewan Broiler Producer of the Year award. Their 160-acre farm is nestled among the three Quill Lakes, with the nearest neighbour almost two miles away. “Biosecurity on the human side is therefore easy to maintain,” Mike notes, “but we’re on the migratory flight path of geese and ducks, so extra caution has to be taken with respect to that.”

His three barns are set up in a ‘T’ formation with a shop-office in the centre, which Mike says is “very nice” in the winter because you can access all the barns once inside the shop. The structural arrangement is also the origin of the company name, T-Barn Farms.  The barns have cross ventilation, with a high-pressure misting system to cool intake air in the summer. Over the years, Pickard has also basically doubled the CFM exhaust fan capacity, “as when it gets hot, there’s no such thing as moving too much air.” The barns’ alarm system is triggered in the event of the temperature moving out of acceptable range, loss of water, power outage or noise of a certain decibel. “There’s a smartphone application available now that enables farmers to control temperature, fan speed, etc., but I’m not there yet,” says Mike. “Plus, I believe that broilers will always require the hands-on human touch, especially with today’s short growing cycle.”

In 2007, Pickard was asked to run for the Chicken Farmers of Saskatchewan (CFS) board, and since 2008, he’s served as the CFS representative for Chicken Farmers of Canada (CFC). “I just finished serving as Chair of the CFC Consumer Relations Committee for the past two years and I’m currently on the Finance Committee,” he notes. “I am also CFC rep to the Canadian Federation of Agriculture.” The Consumer Relations Committee has assisted with a Consumer Relations Strategy that incorporates all of CFC’s consumer relations activities into one focused approach – a Provincial Promotions Program, use of social media, the new CFC website and ongoing relationship-building with health professionals. “We’ve put extra effort into making sure consumers get the right answers to their questions in ways that work for them, with the ’net being a big part of that,” says Pickard.

In the view of the Consumer Relations Committee, understanding consumers is key, which is why they constantly assess consumer needs through Usage and Attitude Surveys. “We’ve found that consumers seem to be most concerned about food safety and animal care,” Pickard observes. “And I personally believe that when it comes to poultry farming – like any livestock farming – animal care is critically important. The more comfortable the animals, the better they will perform.” Finding out that consumers highly value food safety and animal welfare has led CFC to produce the On-Farm Food Safety Assurance Program and the Animal Care Program, which are both auditable to ensure all farmers are in compliance.

Pickard says he really enjoys being on all three boards. “I’ve been pleasantly surprised about how much I’ve liked the experience,” he says. “I’ve had some wise people to learn from, and the staffs of all three organizations are incredible. I’d say one of the most important things I’ve learned is how we all can demonstrate the capability to compromise – entering a meeting with an open mind and at the end of the day, speaking with one voice.” Pickard says there’s always a need for new perspectives, and encourages anyone who has the desire to get involved in their provincial board to do so. Serving these organizations is a substantial time commitment, but Pickard is lucky to have had “the same great farm manager” for over 10 years.

“This may be the new norm,” he says, “and all stakeholders must work together to ease this transition.” He adds, “The broiler industry is always evolving, so producers have to adjust their brooding habits accordingly. We’re fortunate to have some of the best veterinary and poultry science researchers right here in Canada.”

Pickard likes to get away for a week to someplace warm during the Saskatchewan winters and golf during the summers. “But somebody once said ‘if you truly enjoy what you do, you will never work another day in your life,’” he notes. “And that’s true of me.”