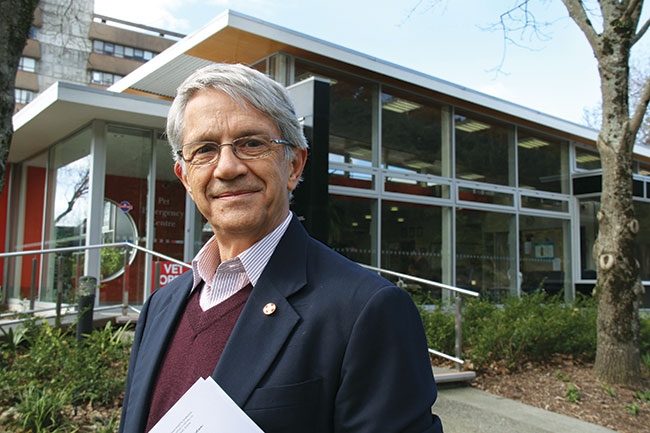 David Mellor, a professor of applied physiology and bioethics at Massey University in New Zealand, led the development and subsequent refinement of the the Five Domains model of animal welfare. He was a recent guest lecturer at the University of Guelph.

The Five Freedoms of animal welfare outline five areas of handling and care that have guided animal husbandry since their formalization in 1979. They were first written to include: the freedom from hunger or thirst; discomfort; pain, injury or disease; the freedom to express normal behaviour; and freedom from fear or distress.

As the Five Freedoms became accepted as an industry standard welfare assessment tool for the care of all animals, they became amalgamated with provisions to provide for these needs.

The objective of being free from hunger or thirst became associated with the requirement to have ready access to a diet and water that would ensure good health and vigour, for example.

However, we now recognize that the Five Freedoms can’t be free. Negative states such as hunger or thirst or pain are essential to survival; without them you won’t eat or drink or flee.

Does this mean that the foundation of good animal welfare was actually based on something unachievable? Is it time for a new model? David Mellor thinks so. “We research to progress,” Mellor said. “We shouldn’t be doing things the same way we did 30 years ago.”

Mellor is a professor of applied physiology and bioethics at Massey University in New Zealand. As a guest lecturer at the University of Guelph, Mellor acknowledged that good husbandry is usually sufficient to maintain neutral welfare, but asks, is the minimalist aim of mere survival efficient, one that only seeks to minimize negative affective states? The Five Freedoms allow an animal to survive, but do they allow it to thrive?

“Originally, it’s all we had,” Mellor said. If you asked a veterinarian in the late 80s what animal welfare was, you would likely get a recital of these Five Freedoms followed by what he called the goldfish response, sort of a blank stare. Discussions about animal welfare have since become less threatening now that we have come to understand more.

A reflection of change
When the Five Freedoms were introduced, animal welfare was all about minimizing the negatives. What was the problem? What were the mechanisms of the problem? How can we manipulate those mechanisms?

By the late 90s, it was okay to measure behaviour but not okay to interpret it without being called anthropomorphic. “We’ve moved on from that,” Mellor said. At the turn of this century, the list of negative experiences was expanded but it wasn’t until 2009 that the discussions began to include positive experiences, albeit reluctantly at first, he added.

The field of animal welfare is continually changing, said Mellor, who saw a need to modify the Five Freedoms into something he has called the Five Domains model of welfare assessment. This new approach characterizes animal welfare into key features, which can be modified and kept up-to-date as our knowledge and understanding increases.

As early as 1997, the Five Domains model was being included in recommendations for regulations regarding livestock, pets, sports animals and pest control in New Zealand. In 2012, the use of the model was expanded to include auditing of zoos and aquariums in New Zealand and Australia. It has since been used as a basis of assessment of animal welfare in court cases and proactively in the development of animal handling guidelines.

The Five Domains
The Five Domains model identifies both the positive and negative elements in each domain, distinguishing between survival-related functions in domains one through three, environmental factors in domain four and mental state in domain five. The model does not define animal welfare. Rather, it helps us think about animal welfare in a different way. Mellor describes it as an aid memoir – one that doesn’t restrict the user nor restrict ideas that may apply to different circumstances or species.

1. Nutrition
The first domain is nutrition. The original freedom acknowledged freedom from hunger, but the new first domain asks, are we feeding the same thing over and over? Are we considering the quality of the feed?  Is there a potential of salt hunger, malnutrition malaise, bloating or overeating?

These factors also bear on the mental state of the animal, as do the experience of pleasure through taste and smell, mastication and satiation.  This new description incorporates minimizing thirst and hunger while further enabling the categorization of eating as a pleasurable experience. In this way, the new assessment helps you to think comprehensively, Mellor explained.

2. Environment
For the environment – domain number two – the assessment goes beyond the requirement of providing shade and shelter to include suitable air quality and resting areas and even consideration of the distress an unnatural constancy or the lack of a stimulating environment may cause.

5. Mental state
Domain five recognizes the mental state of the animal. It goes beyond recognizing negative aspects such as frustration, boredom, loneliness, pain or hunger to recognizing calmness, engagement, affectionate sociability and playfulness.

David Mellor, a professor of applied physiology and bioethics at Massey University in New Zealand, led the development and subsequent refinement of the the Five Domains model of animal welfare. He was a recent guest lecturer at the University of Guelph.

Simple measures
The Five Domains model doesn’t involve a numerical scale because scoring implies a precision that we can’t achieve. Instead, parameters can be measured on a subjective scale that can be as simple as okay or bad, or a range of values in between as needed. We all have the capacity to pick out animals that are okay or bad, Mellor said. It’s not necessary to measure objectively to manage practically.

It is necessary, however, to have an experienced handler conduct the evaluation. Does a snake smile when it’s happy? Of course not, but how then does a snake show happiness? Only a person versed in normal snake behaviour can make that call.

How does a farmer know if a chicken is happy? Don’t start by telling the farmer about the Five Domains or you’ll see their eyes glaze over, Mellor said. Instead, alert them to the possibilities for positive behaviours and start looking.

Sometimes we can become habituated to states that are considered happy when there may be more that can be done. What opportunities have been provided for an animal’s comfort, pleasure, confidence, choice and challenge? How will expressions of normal behaviour be encouraged and harmless wants met?

Mellor isn’t talking about putting animals in nirvana-like bliss, but replacing negative or neutral states with positive ones. Using the Five Domains as a guideline stimulates people to look at different species from mammals, birds and spiders to reptiles and fish, and to think comprehensively basing prescriptions on scientifically supported good judgment.