A look at the advantages and challenges of these systems for cage-free egg production. 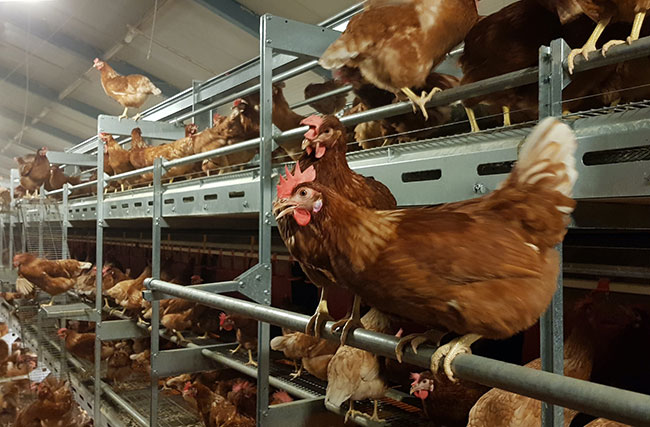 Multi-tier aviaries typically include perches on the top level, where hens prefer to sleep.

Cage-free facilities remain a dominant trend in North American egg production, driven by the growing demands of consumers, supermarkets, restaurants and others in the food supply chain. When transitioning from conventional egg production to cage-free, producers have choices, including multi-tier aviaries, combination (sometimes called “combi”) aviaries and floor systems.

What are multi-tier aviaries?
Some of the earliest attempts at modern aviary design date back to the 1980s in Switzerland, as European markets began developing the demand for cage-free eggs. These early systems typically included different open levels the birds could jump inside, as well as separate nests often located against a wall.

The primary disadvantage of these early systems was that bird density per square foot was very low, with each house containing only 600 to 6,000 birds. This greatly limited potential production and profits from the house. In addition to the inefficient use of space, this setup resulted in a high rate of floor eggs, though the low population of birds allowed farm workers to pick up the eggs relatively easily.

In the 1990s, producers in the Netherlands experimented with similar systems but added more birds per house – with populations often totalling from 20,000 to 25,000. This trial resulted in an even higher rate of floor eggs (six to 10 per cent). The high percentage of floor eggs, combined with the larger bird population, required more labour than is practical for commercial egg production.

Eventually, some egg industry pioneers began building aviary houses with integrated nests, rather than keeping the nests against a wall. They also placed the water lines in front of the nests so that birds would find the nests in their search for water. Birds performed well in this innovative system, and it became the foundation for modern multi-tier aviaries in cage-free egg production.

Today, producers may find a few types of multi-tier aviaries, but they are all based on the same principles. These include a bottom level, a separate nest level with water and a top level with perches. Wire mesh floors and manure belts are located on all levels to maintain a clean environment, while reducing the labour requirements of cleaning the aviaries.

The upper-level perches provide an area where most birds prefer to sleep. The birds naturally tend to spread out on the perches, rather than bunching up in a corner, which helps prevent the formation of hot spots and improves ventilation for a healthy climate in the house.

Today’s multi-tier aviaries also incorporate unique technologies to help ensure a higher quality end product. Some manufacturers are incorporating technologies to encourage birds to only use the nests when necessary.

For instance, one system gently nudges birds out of the nests after laying eggs, preventing them from staying in nests all the time. It helps protect eggs while the collector is running by moving slightly away from the back of the nest so birds cannot reach eggs as they go past. This helps maximize the percentage of clean, grade-A eggs.

An example of a modern three-row, multi-tier aviary house layout. The middle row is wider on the bottom two levels to encourage birds to hop across to the other rows.

Advantages and challenges
The success of multi-tier aviaries in cage-free egg production is largely attributed to the way they support natural bird behaviour. For instance, the layout encourages birds to jump and move around the house. Additionally, multi-tier aviaries have 50 per cent of the floor area available for scratching, which meets or exceeds current cage-free standards in both the U.S. and EU. Providing ample floor space encourages birds to scratch in the afternoon after laying eggs, rather than engaging in undesired behaviours, such as feather pecking.

Because the design of multi-tier aviaries encourages birds to naturally distribute themselves throughout the house, management is kept to a minimum. Features such as wire mesh flooring and well-designed manure belts keep the aviaries and birds very clean, further reducing the amount of labour needed to maintain a hygienic environment.

Producers benefit by being able to stock more birds per square foot in multi-tier aviaries than other cage-free system styles allow. Two-storey houses can also be configured to increase the number of birds per house, which can further enhance return on investment, so long as producers take care not to overcrowd the houses. Bird performance declines in any house when stocked over the maximum recommended density.

Well-trained birds placed in a multi-tier aviary system at an appropriate density have shown good performance, even without molting – just a single cycle through 94 to 96 weeks of age. This results in more eggs per bird, a lower cost per egg, and a higher return on investment than other system types. Over a period of 10 years, for instance, producers may be able to purchase one or two flocks less than they would with under-achieving birds that are taken out after only 74 to 76 weeks of age.

Egg quality is also optimized in multi-tier aviaries. Nests and eggs are kept cleaner in these systems, and a gentle collection system minimizes cracking, helping producers achieve the most grade-A eggs per hen. 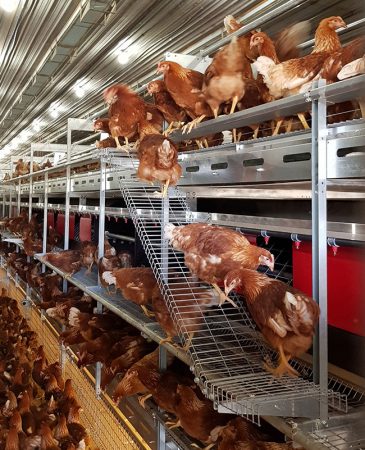 Multi-tier aviaries typically include a bottom level, a separate nest level with water and a top level with perches.

Comparisons to other systems
The two main alternatives to multi-tier aviaries are floor and combi systems. Floor systems are often chosen for existing poultry houses with low ceilings or other space constraints, and some consider these systems to provide the most bird freedom. Also, one great appeal of converting to a floor configuration is the typically lower short-term expense.

What may be a short-term gain in cost savings with a floor system is quickly outweighed by the higher long-term performance and density benefits of a multi-tier system.

Combi systems were first developed in Germany in the 2000s with the goal of creating a superior alternative to multi-tier aviaries. They feature nests, feed and water on each level, based on the idea of placing less importance on training birds to move within the system.

While this design offers some advantages, such as lower installation costs and decreased feed consumption due to less bird movement, it also has considerable drawbacks that may cause management issues and reduced bird performance, even though it was originally conceptualized as a low-management solution.

A greater concern with combi systems, however, is the loss of egg quality. Because combi systems have nests on every level, they require more egg belts in places that tend to collect dirt, dust and other contaminants. Additionally, the combi design often leads to an unbalanced distribution of eggs.

Because of these problems, producers frequently experience dirtier eggs, more cracked eggs, and lower egg quality in general. Some trials have shown that combi systems result in 10 to 30 less grade-A eggs per bird over the total production cycle than multi-tier aviaries, which greatly diminishes profitability.

Perhaps the biggest issue with combi systems has nothing to do with production, egg quality or labour, but rather public perception. Though these are “cage-free” systems, they still resemble traditional caged housing. When it looks like the birds are in a cage, it does not matter how much one tries to explain it, some still see cages.

Many retailers, food producers and chain restaurants see perception as reality and are putting in their contracts that they want cage-free eggs from multi-tier style aviaries, not combi systems. In fact, for this reason alone, combi systems are already rejected by many European producers today.

The advantages of multi-tier aviaries in cage-free egg production are that they offer long-term viability and the greatest potential for long-term profitability.

Not only do these systems benefit bird welfare by encouraging natural bird behaviours and movement throughout the house, but producers also benefit from reduced labour requirements, lower cost per egg and increased number of grade-A eggs per bird.

These benefits beg the question, if multi-tier aviaries are comparably more advantageous than floor or combi houses, then why are they not being used by every producer? Some of this is due to the mindset of traditional cage production. In such systems, it came down to building costs per bird.

Density in such houses is maximized, so the cheaper, the better. Thus, a producer converting from a traditional caged to a cage-free system may still be focused on the highest density at the lowest possible cost and, without considering other factors, that points to a combi system.

As with most industries, change takes time. Additionally, change tends to happen after others pioneer new technologies and the advantages become clear to everyone. The positive experiences in Europe will continue to drive acceptance in North America.

And as more and more producers convert to multi-tier aviaries, and it is repeatedly seen how these facilities produce more, high-quality eggs, with less labour, and without the public perception problems, it is only a matter of time before this “new” multi-tier approach becomes the standard.