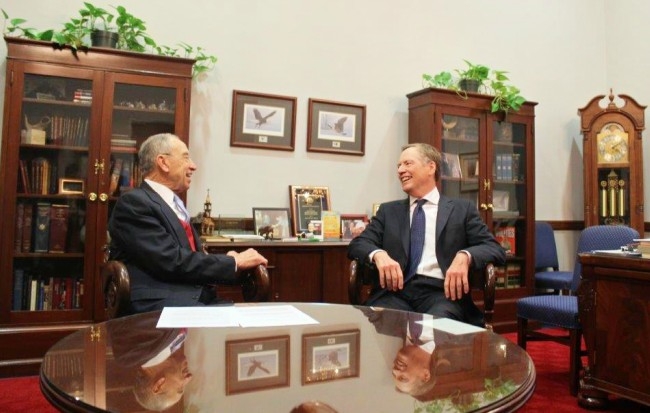 October 20, 2017, Washington, D.C. – American policy-makers admit they have not worked to analyze the economic impact of the end of the North American Free Trade Agreement, even as President Donald Trump threatens to cancel the agreement.

That absence of research applies to both elected branches of the U.S. government: neither the White House nor congressional researchers have an impact assessment, despite uncertainty over the fate of the 23-year-old pact.

Frustrations at the bargaining table exploded into the open at the last round where the most common conversation topic in the hallways involved whether Trump’s team was intentionally trying to sabotage a deal.

A research unit for Congress, the U.S. Government Accountability Office, which performs studies for lawmakers, tells The Canadian Press that it has in the past conducted analysis on international issues like the monitoring of Iran’s nuclear program, but nobody has yet requested research on NAFTA.

“We have not been asked to look at the (NAFTA) issue,” said an official there.

It’s the same at the White House. Donald Trump’s trade czar, Robert Lighthizer, says he hasn’t yet done the research. Inside U.S. Trade quoted him telling a group of American reporters that his current focus is trying to get a deal, not studying life without NAFTA.

The countries have pushed the negotiation schedule into next year, shelving talk of a quick easy agreement.

“You always think about what might happen, but we haven’t done any analysis of that at this point,” Lighthizer told a gathering of American trade reporters earlier this week, according to Inside U.S. Trade. “No, we don’t really have a plan beyond trying to get a good agreement…

“(But) if we end up not having an agreement, my guess is all three countries will do just fine.”

The Canadian government says it has been researching the potential impact of various trade scenarios.

Duncan Wood, a Mexico expert, said the U.S. is certainly acting like it wants to leave the pact, putting forward proposals the other countries could never accept. Wood said he fears the Trump administration is inching toward a pullout – without doing its homework.

“That doesn’t make me feel very good when I go to bed at night,” he told panel this week at the Washington International Trade Association.

“If they were taking these decisions based upon years and years of studies and saying, ‘You know what, we think we’ll be absolutely fine, because the stats show it,’ I could say, ‘Okay, fine, I get it, I may disagree, because I like Mexico, but for the United States, I get it’…

“(But) that (absence of research) worries me.”

He cited the poultry trade as just one example of the complex potential consequences.

Producers sell different chicken parts to different markets, based on local preferences. He said Mexico’s huge chicken tariffs would lead to an oversupply of dark meat on the U.S. market; a shortage in Mexico; and chicken plants moving to Mexico.

But he said broken cross-border supply chains aren’t what worries him most. Wood expressed fear that the current fight at the NAFTA table is a prelude to a bigger battle against the World Trade Organization and international trading system: “These are dark days, my friends… This is near-apocalyptic what we’re looking at. I don’t mean to exaggerate. I’m not one for hyperbole.

“I actually am terrified about what’s about to happen.”

George W. Bush delivered a gloomy speech this week that, without mentioning Donald Trump, warned about the degradation of American democracy, mean-spiritedness, racism, conspiracy-mongering, and attacks on open commerce.

“Free trade helped make America into a global economic power,” Bush said. “We see a fading confidence in the value of free markets and international trade – forgetting that conflict, instability, and poverty follow in the wake of protectionism.”

He said policy-makers should be sensitive to the painful effects globalization has had on some industries: “People are hurting. They are angry. And, they are frustrated. We must hear them and help them. But we can’t wish globalization away, any more than we could wish away the agricultural revolution or the industrial revolution.”

The Canadian government says it’s been studying a variety of NAFTA contingency scenarios since last August.

Some of that work has involved the legal and political questions surrounding a breakup. But officials say multiple departments, including Global Affairs Canada and the Department of Finance, have also been conducting economic analysis of the potential impact of a NAFTA cancellation.

The former head of Foreign Affairs’ computer-modelling unit, Dan Ciuriak, said he’s working on a paper on different scenarios for the C.D. Howe Institute. His preliminary estimate is that the most drastic result – the end of free trade in North America – would see Canada’s economy contract 2.5 per cent long-term, with a larger shock in the short term.