Diseases on the rise in eastern and western Canada, as broiler producers deal with reduced use of preventative antibiotics. 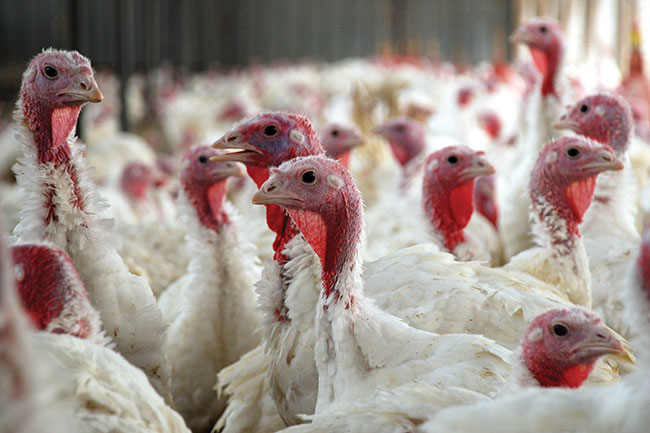 Both presenters, as is the norm, used their personal observations as well as information from other veterinarians and colleagues in the industry.

Without further ado, here is a summary of what’s stabilized and what were the biggest disease issues for each bird type in 2020. It includes a special emphasis on broilers as the phase out of preventative antibiotics continues.

Western Canada
A typical number of broiler breeder flocks in western Canada were challenged with coccidiosis, leading to uniformity issues in pullets and potentially necrotic enteritis (NE). Nickel notes that there was also some infectious laryngotracheitis (ILT) and some sporadic Marek’s disease in B.C. this year. A few cases of blackhead were seen in breeder flocks across western Canada as well.

Layers in this region showed good overall production and health outcomes, with some E. coli infections, coccidiosis and staph arthritis cases in aviary and free-run systems.

And while it’s been a challenging year for the turkey industry in western Canada, “there were good overall production outcomes,” Nickel explains. “There were cases of Mycoplasma gallisepticum in B.C., along with cases of gangrenous dermatitis in Alberta and Manitoba. Increased breast blisters were seen in market aged toms, which can lead to downgrades at the plant and, in severe cases, higher condemns. But the big story for turkeys in terms of disease this year was blackhead.”

Case numbers in B.C. have been significantly elevated this past year and there was the odd case in Manitoba. Nickel reminds producers that any age of turkey can be infected and mortality can occur at any age. “Submit birds to a veterinarian for quick diagnosis,” he advises. “Immediately fence the farm into as many pens as possible or move birds onto fresh litter. Top dress the litter with new shavings in the pens, and review your deworming program.”

To prevent blackhead, producers should also maintain strict biosecurity (no cracks and ensure doors seal properly), implement good pest control for rodents and beetles, spread salt along the outside of the barns to prevent earthworm entry and conduct thorough cleaning and disinfection between flocks.

In layers, flocks in Quebec experienced colibacillosis, coccidiosis, IB and NE. “Infectious bronchitis driven by the DMV strain caused significant challenges to flocks in Nova Scotia,” Walkey explained. “In Ontario, seasonal spikes in IB cases were reported within expected limits for the time of year. Infrequent DMV strain infections were seen, but overall the vaccination programs are concluded to be working well.”

Ontario also consistently reported increased challenges with coccidiosis, NE and roundworms in laying hens raised on floors. Overall, the number one issue that continues to be the most concerning for the layer industry is the lack of approved antibiotics for laying hens.

In turkey flocks in eastern Canada, colibacillosis was a consistent struggle in 2020, Walkey reported. In Quebec and Ontario, there were some Salmonellosis, blackhead, reovirus and cases of Orthinobacterium rhinotracheale, with one persistent case in Ontario of multi-drug resistance.

“In 2020, reovirus presented a significant disease challenge in Ontario turkeys, most commonly presenting in toms,” Walkey says. “It is easy to imagine the economical significance of reovirus when lameness can affect 15 to 70 per cent of a given flock.”

Raised without antibiotics (RWA) flocks can be difficult to support against secondary disease pressures. TARV proves quite hardy in the environment. Ontario producers have been focusing efforts on barn cleaning and disinfection, and water sanitation. 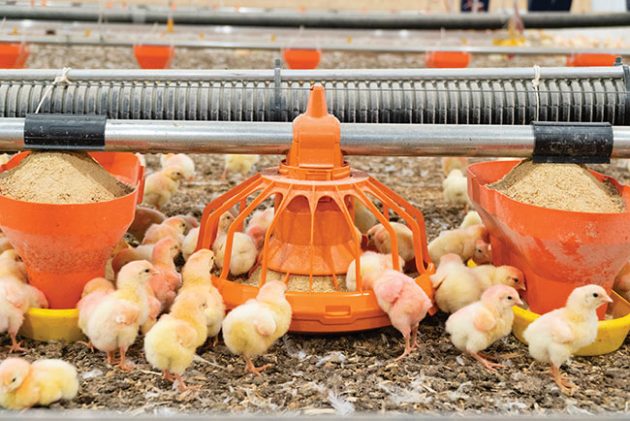 As the use of preventive antibiotics in broiler production continues to shrink, the need to closely watch flocks for disease threats becomes imperative. PHOTO: Big Dutchman, ICON: © FREEPIK / FLaTICON

Broilers across the nation
As the use of preventive antibiotics in broiler production continues to shrink, the need to closely watch flocks for disease threats becomes imperative. In eastern Canada, Walkey notes that E. coli was the predominant pathogen isolated in early and late systemic bacterial infections in broilers this year. “E. coli presents as a primary or secondary pathogen across all poultry production,” she explains. “We’ve seen a significant upward trend in the past 11 years.”

Maritimes broiler flocks also faced significant challenges with two Infectious bursal disease (IBD) strains. “Facing coccidiosis and NE are becoming the new way of life for eastern Canadian broilers,” Walkey notes. “IBH also made the charts across the eastern provinces with various impacts on flock morbidity, mortality and secondary disease challenge.” Reovirus-associated lameness was a concern in Ontario and Quebec, with some shifts in the genetic composition of the variant strains.

In western Canada, Nickel reports that coccidiosis and NE continue to be a concern in RWA and conventional broiler production, with some potential resistance building in the causal pathogens. Colibacillosis was observed this year across western provinces and tended to affect chicks in the first week of the production cycle.

Inclusion body hepatitis (IBH) and reovirus continue to be a concern in broilers. “ARV (avian reovirus) is still observed on broiler farms, and can be prone to mutations,” Nickel says. “However, not all forms of ARV are pathogenic and so it’s important to have the samples sequenced. Also, remember that because it’s a virus that has no envelope, it tends to be quite resistant to disinfection.”

In terms of other diseases in western broiler flocks, ILT remains an acute and highly contagious concern, mainly in B.C. Nickel notes that broiler flocks with ILT can experience increased mortality and mortality has the ability to double each day. Prevention through vaccination and biosecurity are critical.

Many of the outbreaks are related to viruses in vaccines that have reverted back to virulence and infect a naïve broiler flock with no previous immunity. If a veterinarian diagnoses ILT in long-lived birds they can shed this virus, especially during times of stress.

Outlook for 2021
Looking forward, Nickel believes the disease challenges of 2020 across western Canada will continue. “Some of the common ones I forecast we will continue to struggle with include colibacillosis, reovirus, IBH, coccidiosis and NE,” he says.

“We will continue to work with our colleagues and allied trades to help problem solve and provide timely and effective solutions to poultry producers.”

Walkey adds that, “The industry will need to focus on gut health and integrity as we drive towards reduced antimicrobial usage.”