The latest studies on production, biosecurity, food safety and more. 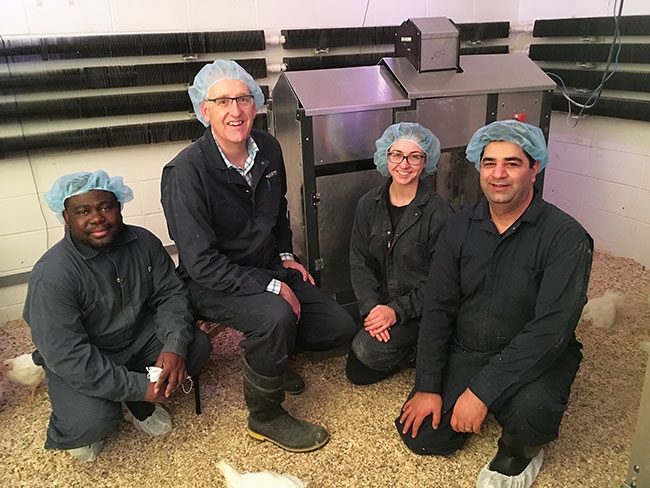 Note that summaries are often only partial due to space limitations, some studies span more than one category and some are being carried out by graduate students. To save space, we are only listing names of one main scientist and institution.

Welfare
Alexandra Harlander at the Campbell Centre for the Study of Animal Welfare at the University of Guelph (U of G) is examining why chickens feather peck. She’s also looking at how eating feathers may affect the digestive tract, as well as interactions between the digestive tract and the brain.

What’s more, Harlander currently studies non-traumatic activities as a major cause of bone damage in chickens and how muscle use affects skeletal health to determine solutions for prevention of keel (breast) bone fractures. She is studying how  a bird’s choices between clean and dirty environments affects its health and behaviour as well.

Ben Wood, also of U of G, is studying whether feather pecking in turkeys is related to genetics and activity level, with Hybrid Turkeys (CPRC project #PWB054).

In addition to supporting CPRC projects, EFC supports many other welfare-related projects. One involves testing if social stress induced by dense populations of laying hens in free-run systems contributes to feather pecking or influences changes in gut microbiota, immune system and more (Harlander).

EFC is also supporting the development of the first-ever survey on risk factors for feather-pecking behaviour in North American laying hens. The goal is to identify and quantify management, environmental and genetic associations with pecking and feather loss in alternative housing systems. Survey results will be used to create a Canadian Feather Management Plan (a user-friendly feather cover scoring system and illustrated guide) for farmers (Harlander).

EFC also supports research assessing methods for on-farm euthanasia of turkeys, chickens, breeders and layers and another study on the effect of finishing space allowance in standard and enriched rearing systems on performance, health and welfare of layer pullets (Tina Widowski, U of G).

Another welfare study with EFC’s supports looks at the behaviour of pullets following the provision of lighting during embryo development and also the influence of a range of exposure conditions during simulated transport on pullet and end of lay physiology, welfare and meat quality (Karen Schwean-Lardner, University of Saskatchewan [U of S]).

Human health
Marie-Lou Gaucher at the University of Montreal (U of M) has found a significant percentage of carcasses and environmental samples in poultry processing plants in Quebec contain Clostridium perfringens, which causes necrotic enteritis in chickens and is also a cause of food-borne human illness. She is now determining how contamination occurs and the corrective measures that might be taken.

Beyond involvement with CPRC projects, EFC supports a number of human health studies related to eggs. One looks at how the ingestion of egg whites may increase antioxidants in the aging heart (Sanjoy Ghosh, University of BC [UBC]).

Another is an assessment of vitamin-enriched granule extracts from egg yolk (James House, University of Manitoba [U of Man.]).

Yet another EFC-supported project looks at the ability of digested egg yolk to lower blood pressure in rats and the components responsible (and two upcoming projects: a clinical trial to assess the safety and efficacy of an egg-derived peptide in blood pressure management and the development of a new application for ovotransferrin, a natural bioactive protein in egg white, as a functional food ingredient for use in bone health products) (Jianping Wu, U of A).

EFC also supports the development of nano-textured eggshell surfaces from breaking plant eggshell waste to create eggshell scaffolds that can be used as a bone graft substitute in orthopedic reconstructive procedures (Maxwell Hincke, Univeristy of Ottawa [U of O]).

Another is evaluating eggshell membrane nano-particles as therapeutic agents against cancer and other conditions (Maxwell Hincke, U of O).

Feed
Hendrix Genetics has partnered with insect protein production firm Protix to improve the potential of insects as a feed ingredient.

Out west, Doug Korver at the University of Alberta is determining whether hens are able to regulate calcium intake to meet their needs, and how their appetite for calcium compares to current breeder-recommended levels.

Korver is also determining how multi-enzyme supplementation of laying hen diets can reduce costs and the use of eubiotics (a combination of enzymes, probiotics, prebiotics, essential oils and benzoic acid) as potential replacements for growth-promoting antibiotics in broilers.

Back east, APRI researchers are studying local lobster shells as an alternative calcium source for laying hens (Derek Anderson and others). The team is also looking at the use of crickets in poultry diets and their antimicrobial potential to defend against necrotic enteritis (Stephanie Collins and others).

U of A’s Martin Zuidhof continues his work on precision feeding layers for improved uniformity, production and sustainability (see sidebar on page 13).

Another study is looking at if different feed ingredients and dietary manipulation strategies can reduce ammonia and carbon emissions in egg production (Eduardo Beltranena, Alberta Agriculture and Forestry).

Dalhousie’s Rathgeber is assessing the use and benefits of dietary red seaweed in laying hen diets.

Lastly, in a yet-to-be launched study, U of M’s James House will look to define omega-3 requirements for optimal health/performance in pullets and laying hens.