Necrotic Enteritis: There’s a vaccine for that! 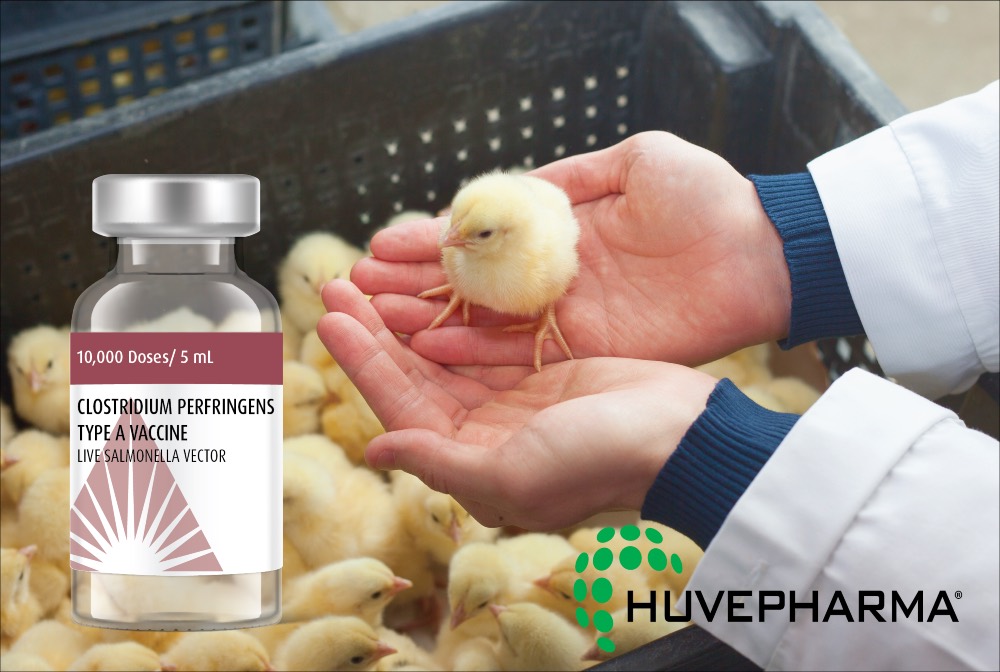 Clostridium perfringens Type A vaccine is the first and only mass-administered live vaccine available for controlling necrotic enteritis in broiler chickens.

Necrotic enteritis (NE), caused by the bacterium Clostridium perfringens (Cp), is a significant pathogenic disease in broiler production causing an estimated $5 to 6 billion per year (World Poultry, 2015) loss to the global industry.

While acute clinical disease with high levels of mortality (up to 40 per cent) is not that common, subclinical disease, with low/no mortality, has been linked to poorer broiler performance. Subclinical disease can cause up to 12 per cent lower market weights and 11 per cent poorer feed conversion (Skinner et al. 2010). With today’s high commodity costs, this loss in performance can have significant impacts on producer income.

While there are in-feed solutions to prevent NE (e.g., antibiotics), category I and II antibiotics  have been eliminated for preventative use in Canada (since 2014/2018, respectively) due to concerns over the development and transfer or resistance to human pathogenic bacteria.

Despite raised without antibiotics (RWA) or no antibiotics ever (NAE) in the U.S., production increases (approx. 50 per cent of broiler production in the U.S.), the use of traditional antibiotic controls, including the potential removal of category III products in Canada for the prevention of disease, means that further safety nets are being removed, with increased risks for NE.

Indeed, NE has been cited as the number two concern after coccidiosis between 2016 to 2020 according to a United States Animal Health Association report. Although there is a myriad of feed additives with varying degrees of efficacy in limiting the impacts of (Cp), including, for example, organic acids, essential oils and probiotics, few have clear claims/efficacy in the control of NE and as such, “new” areas of control are being sought to support the wider poultry industry.

One such area, is the development of vaccines to control NE, as was highlighted recently (Canadian Poultry – September 2022 issue) with groups from University of Montreal and University of Guelph developing NE vaccine alternatives.

While new solutions will be welcome to support the industry’s goals, it’s important to note that there is already an approved commercial vaccine (Clostridium perfringens Type A vaccine, Huvepharma) available to producers since August 2022 in the Canadian poultry sector.

While Cp is nearly always present in the gut microbiome of chickens, only select strains, and under the right conditions, can they become pathogenic and produce the two known toxins – Alpha and NetB toxin – that cause gut damage. Cp bacteria use these toxins to provide key nutrients they need to survive and proliferate and is one reason that formulation of broiler diets with highly digestible nutrients is important to reduce available protein in the GI tract.

Alpha toxin is a membrane active phospholipase, meaning it affects the fatty acid components of the cell membranes of the intestinal wall, and the NetB toxin, a pore-forming toxin which creates “holes” in the intestinal cell walls, causing disruption to the absorptive surface of the GI tract, thereby reducing digestive capacity and, consequently, poorer performance.

Clostridium perfringens Type A vaccine is the first and only mass-administered live vaccine available for controlling NE in broiler chickens that stimulates a mucosal immune response through antibodies (IgM, IgA and IgY) against these major NE toxins. This is different to other vaccines that typically express surface active proteins that directly target the bacteria. 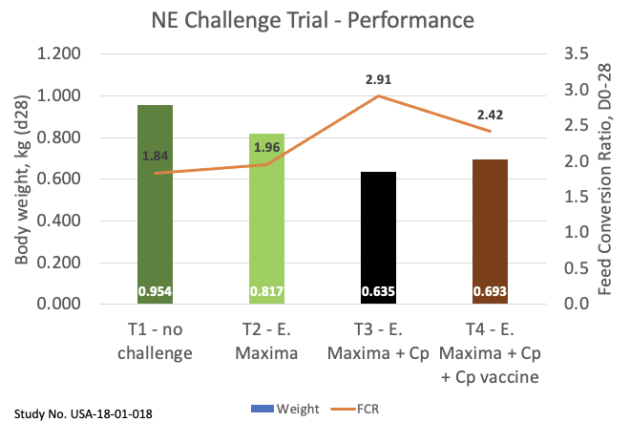 Figure. 1. Broiler chicken mortality due to necrotic enteritis with and without Eimeria maxima challenge and Clostridium perfringens challenge.

Two other similar studies with different Cp strains showed similar efficacy with a mortality reduction of up to 72 per cent. Under these challenge conditions, vaccinated broilers (treatment 4) showed significantly higher market weights (+9.1 per cent) and lower FCRs (-16.8 per cent) relative to unvaccinated controls (treatment 3; see figure 2). 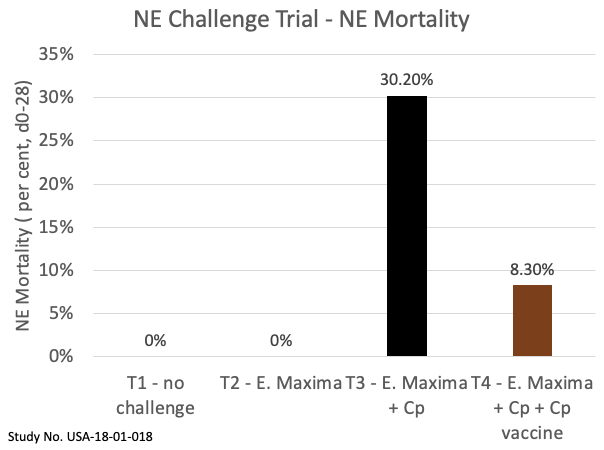 Under field conditions in Ontario, comparing a series of matched flocks (control and test flocks on each of three separate farms) on over 99,000 birds, vaccinated birds showed:

These results are comparable to a large-scale U.S. study with over 30 million broilers that showed 50 g heavier birds at market with 0.37 per cent higher livability and 2.7 lower adjusted FCR (see table 1). As more field tests are conducted in Canada, the benefits of using the Cp vaccine will become more evident, providing further support of this unique tool in the fight against NE, while also helping to reduce the reliance on preventative use of antibiotics.