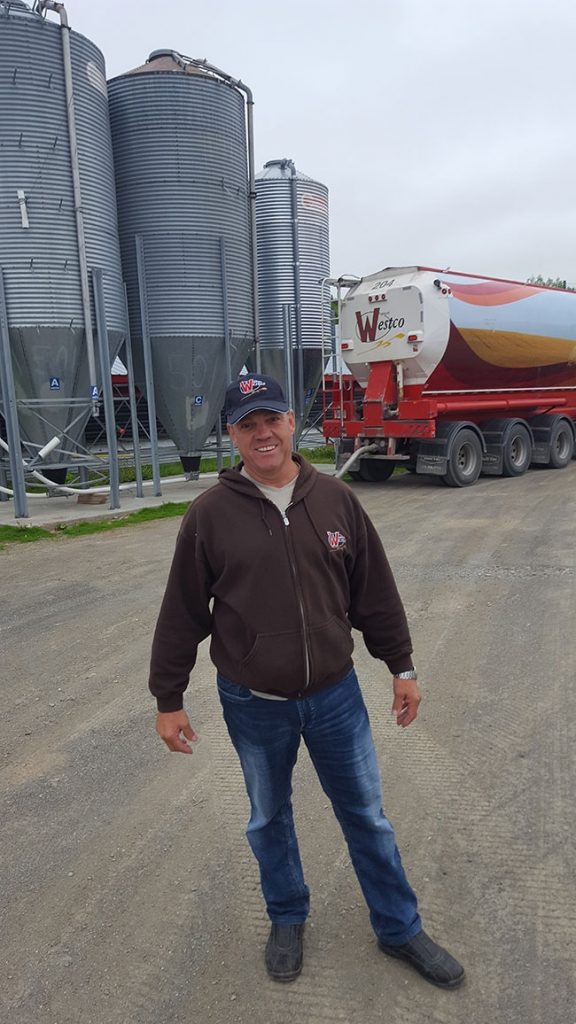 Bertin Cyr was first granted quota in the 1970s as part of the initial round allocated by the marketing board. Today, he has a dozen barns.

“The plant manager wanted a consistent supply to start a new processing line and develop a market for turkey,” Cyr recalls. “So, with the help of my dad, I built a barn and decided to grow some turkeys.”

On Oct. 29, 1975, the first flock of 3,000 turkeys moved into Cyr’s newly built barn. For the first year, Cyr juggled his farm chores around his high school classes, with a helping hand from his dad, who was a truck driver. With no farming background, “we learned everything in the field, with help from the feed company representatives,” Cyr says.

At that time, the marketing board was just being established for turkeys in the province. Cyr applied for and was granted quota as part of the first round allocated by the Turkey Farmers of New Brunswick.

Three years after the first flock arrived, Cyr’s dad was hooked on poultry and started his own chicken farm. By the mid-1980s, the younger Cyr would also branch into broiler chickens like his dad.

Meanwhile, the turkey flock grew steadily and naturally from within. Over the years, Cyr also had the opportunity to buy two smaller, neighbouring turkey farms enabling an increase in his production.

At that point in time, as his flock grew, the location of his farm was his biggest obstacle. Cyr’s farm business is situated in Saint-François-de-Madawaska, a village with approximately 550 predominantly French-speaking residents in northern New Brunswick. It was certainly off the beaten path.

“It was hard to get feed because there was only one feed mill and no competition,” he says, noting the monopoly was influencing feed costs. The next closest mill was in Quebec and it was even more cost prohibitive to buy a partial load and transport it that distance.

So, Cyr along with his dad and four other local poultry farmers hatched an idea to form a purchasing group. “Then we could put our feed orders together and have enough to fill a truckload and get better pricing from mills even if they were further away.”

That was the beginning. Soon, the purchasing group was actively communicating and pooling their orders for farm supplies such as medications and equipment, plus co-ordinating their calendars to make it worthwhile for professionals, including a veterinarian, to visit all the farms in a cost-effective trip.

Then the purchasing group saw the opportunity to move beyond pooling buying habits to making investments together. They started with a feed truck, which helped to improve the timing of when they could get feed delivered. Next came the hatchery, breeder barns and a few more feed trucks.

“Really, we had no choice – if we wanted to grow bigger we needed to grow together,” Cyr says, noting the group operates so that everyone has an equal voice.

By the late 1990s, any further efficiencies were getting harder to realize between the co-operative farmers. “It was getting complicated because each barn didn’t work the same way,” Cyr says. “We all had different ways to manage things like feeding, barn layouts and ventilation.”

In 2002, the producers decided to formalize their collaborative arrangement and formed Groupe Westco Inc., with six producers as shareholders. In doing this, each shareholder maintains ownership of their farms, yet transfers the day-to-day management to Westco to bring more consistency to how all the poultry are managed across all the barns.

Together, the group has business interests in broiler and egg-laying chickens as well as turkeys, and has also opened their own processing plant locally – giving them the opportunity to manage all the steps from “egg to plate,” Cyr says.

Today, Cyr is one of 18 turkey quota holders in New Brunswick and produces 1.4 million live kilograms annually in a dozen barns spread over a few farm sites – including that original barn he started with in 1975.

“We don’t have any processing for turkeys in New Brunswick so it’s hard to develop the market more than what we already have,” Cyr says. Production in New Brunswick is currently 4.38 million kilograms of live turkey. He appreciates being part of the purchasing group to gain the volume discounts even if his turkeys are different than the predominantly broiler chicken interests of the other Westco shareholders.

Cyr has been a board member with the Turkey Farmers of New Brunswick since the late 1980s. He joined the national board in the mid-1990s. “I enjoy it,” he says of the board work, “though I’m getting older and it’s nice to see more young farmers getting involved with their ideas.”

Two of his three children have joined the poultry business. His oldest son is an engineer and involved with Groupe Westco barn building and repair projects. His other son is involved with the maintenance in the barns.

Cyr is chairman of the board of directors for Groupe Westco Inc. and remains intricately involved in the business, though there’s more paperwork and office time in his days now than when he started farming 42 years ago.