Fly larvae has been approved by the Canadian Food Inspection Agency for use in poultry feed. 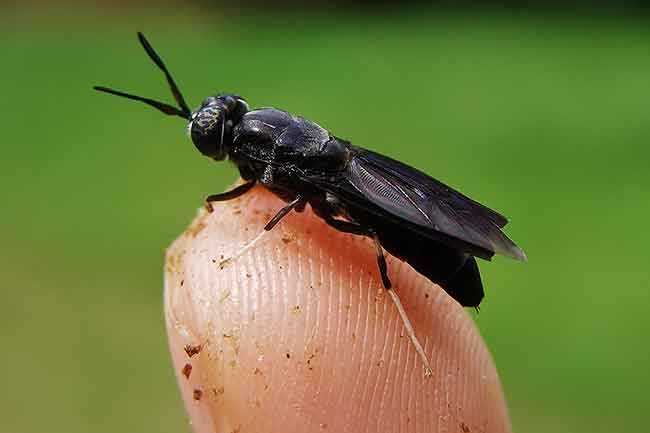 We have two new cutting-edge Canadian poultry feed developments to present in this issue of Canadian Poultry. First up is a high-protein ingredient produced by Enterra Feed Corporation of Langley, B.C., which recently received Canadian and U.S. regulatory approval for use in animal feed (broilers and pets so far) – the first ingredient of its kind to do so.

The ingredient is Whole Dried Black Soldier Fly Larvae (BSF). Black Soldier Flies are native to North America and do not bite or sting. The larvae are high in protein and fat, and grow quickly. Enterra’s Marketing and Operations Manager says BSF are renewable and environmentally-friendly, consuming pre-consumer food waste that would otherwise go to landfill, composting or waste-to-energy operations where the food nutrient value would be lost. Victoria Leung also notes that BSF larvae will consume a wide range of waste food, from fruits, vegetables and stale bread to grains and grocery store waste.

All of the company’s production processes were developed in-house by Enterra’s research and engineering teams over the course of several years. “The adult flies are grown in cages under controlled environmental conditions,” Leung explains. “Once the larvae mature, they are either sent back to the cages to emerge as flies or they are harvested as product.”

When asked about the potential reaction a consumer might have to eating chicken that has been fed dried fly larvae, Leung says that “based on our experience, we are not too concerned…Insects are a natural source of nutrients for chickens, fish and other animals – it’s what they eat in the wild. Free-range chickens, for example, naturally forage for insects.”

The biggest barrier to commercialization of BSF has been clearing regulatory hurdles to achieve approval as a feed ingredient. “However, we are now seeing very good progress on this front, first with the Food and Drug Administration (FDA) in the U.S., and now with the Canadian Food Inspection Agency (CFIA) as well,” Leung explains. CFIA approval this summer came after four years of work, during which time the agency reviewed BSF as a ‘Novel Feed Ingredient,’ did a data review and a complete safety assessment (livestock, workers, food and the environment). “CFIA has a very thorough review process that involves assessing the product for safety, microbiology and efficacy for each target animal type, for example salmon, broilers and so on,” says Leung. “We also needed to show the product worked equivalent to or better than feed ingredients currently on the market.”

Enterra is working with the CFIA and FDA to have its BSF approved for use in other animal feeds as well, including poultry layers, other poultry (turkeys, ducks), trout and salmon. Approval is anticipated in mid-2017. The firm is also working to develop new products from dried larvae such as oil and high-protein meal.

Because it’s a natural ingredient, we asked Enterra if inclusion of BSF in chicken feed will help with bird gut health, for example perhaps reducing incidence of coccidiosis and necrotic enteritis. Leung responded by noting that “insects contain chitin as part of their exoskeleton structure. Researchers have proposed that inclusion of chitin or chitosan in poultry diets may improve poultry health; however, more research is needed.”

Dr. Bob Blair, nutritional scientist and Professor Emeritus in the Faculty of Land and Food Systems at the University of British Columbia (UBC), has studied BSF. “The meal is closest in composition to fish meal and is a valuable feed ingredient,” he says. “It contains 40 to 60 per cent crude protein, depending on the amount of oil extracted during processing.” He has found no issues with blending it into feed, though he notes the high-fat product may have to be stabilized. “I do not have first-hand experience of feeding the meal to poultry since UBC no longer has the requisite facilities, but based on my talks with the company and my understanding of research conducted on similar products elsewhere, I regard it as an excellent poultry feed ingredient. Its main limitation is the cost – can it compete economically with other protein feedstuffs or will its cost limit it to more expensive feeds such as fish feed?” Blair adds that since BSF excrement can be used as fertilizer, the whole BSF production process “is to be welcomed as a sustainable way of producing a valuable feed ingredient from vegetable waste that would otherwise be dumped.”

Enterra is currently selling BSF to both Canadian and U.S. customers in the poultry and pet food industries. Scratch and Peck Feeds in Bellingham, Washington began purchasing BSF in April 2015, shortly after it became available on the U.S. market. “We wanted it to package as a poultry treat as an alternative to meal worms which are predominantly grown in China,” explains owner Diana Ambauen-Meade. “One of our company’s values is to source our ingredients as locally/regionally as possible so we don’t buy anything offshore. And we value that they feed the larvae pre-consumer food waste that would normally end up in a landfill as it is a very effective way to close the food waste loop.” She says she fully intends to integrate BSF into her feeds as an alternative protein source to the fishmeal currently used.

When asked about the potential to have widespread inclusion of BSF in U.S. and Canadian poultry feeds, in terms of the environment impact that would have on diverting landfill waste and in the avoidance of other feed ingredients which have greater impact, Leung has a positive outlook. “There is a big potential for our insect ingredients to become a standard inclusion in livestock diets,” she says. “Our company plans to expand far beyond our Langley facility – anywhere there is an abundance of food waste, it is possible to build a commercial insect-rearing facility to upcycle the waste nutrients into sustainable feed ingredients.”

Antibiotic replacement?
Ontario-based AbCelex Technologies has developing a line of non-antibiotic, non-hormonal products that eliminate or significantly reduce pathogens in the chicken gut such as Campylobacter and Salmonella. “Since these innovative products are based on natural antibodies, there is no risk to human health and no possibility of antibiotic resistance,” says President and CEO Saeid Babaei. “The products will be delivered as a feed additive. Chickens simply ingest the antibody and it selectively neutralizes the bacteria. Our results in live chicks show 95 per cent inhibition of the Campylobacter pathogen, far higher than any other pre-harvest method used in industry and what expected by regulators.”

AbCelex is now moving forward with young adult field studies to be followed by large broiler trials to support regulatory submissions, with a goal of market launch in late 2018 or early 2019. “Being the first product of its kind, we will work with various regulatory agencies in getting our products approved,” Babaei notes. “Our commercialization strategy is to directly market to large poultry producers/processors as well as co-marketing opportunities with larger animal health companies…We have already partnered with one of Ireland’s largest poultry producer/processor, Carton Group, which may be involved with commercial farm studies and product registration in Europe.”

The very small antibodies (also called single-domain antibodies or nanobodies) employed by AbCelex occur naturally only in the blood of cameloids (camels, llamas and alpacas) and sharks. “The discovery of this novel class of antibodies stems from the early 1990s,” Babaei explains, “when Belgium scientists were studying the blood of cameloids and they noticed that the immune systems of these species produced a unique type of antibody around a tenth of the size of usual antibodies — small enough that they were orally bioavailable, whereas conventional antibody drugs must be injected to enter the bloodstream.” The nanobodies’ small size and flexibility for molecular engineering also allows for cost-effective mass production.

In the past several years, AbCelex has increased the resistance of its lead products to the acidic conditions of the animal digestive tract, and also significantly improved their resistance to heat (required in poultry feed preparation). In the past year, they have also produced their lead antibodies in various micro-organism systems, such as yeast. In July 2016, AbCelex received an investment of $3.4 million through Agriculture and Agri-Food Canada’s ‘AgriInnovation Program’ to support further product development. Babaei says this will be conducted in collaboration with Canadian and international academic institutions, companies and contract research groups.