The Zephyr E is a practical alternative for euthanasia of turkeys 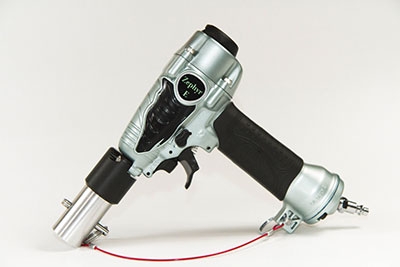 Both are portable, but whereas the Zephyr E needs to be hose-connected to a stationary air compressor, the cordless TED runs off a gas canister. Farm and Food Care / Karen Dallimore

The development and commercialization of the Zephyr E small animal dispatch tool is a great example of what can happen when research and industry work together.

Originally designed for stunning rabbits in abattoirs, the Zephyr was created for use by the Ontario Ministry of Agriculture and Food. Dr. Tina Widowski, the director of the Campbell Centre for the Study of Animal Welfare and an animal and poultry science professor at the University of Guelph, had an idea that the non-penetrating captive bolt tool could be adapted for use with other small animals, such as poultry and piglets.

Widowski enlisted the assistance of her graduate students, Marisa Erasmus and Teresa Casey-Trott, to test the device as a dispatch tool for turkeys and small pigs. The new prototype they developed uses a longer, more conical nylon bolt head than the previous version.

In their tests, the tool effectively rendered all test animals immediately unconscious, followed quickly by death in a one-step process. It also consistently administered the same force to the skull independently of the strength of the operator. During their research, the team also identified the most effective placement of the Zephyr for turkeys – directly above the cerebral cortex, in the middle of the skull between the ears and the eyes. This location is now depicted in the user manual of the Zephyr.

The development of this tool did not escape the notice of Farm and Food Care (FFC). Its head office is only a stone’s throw from the University of Guelph, and Casey-Trott was part of a Scholarship Program Partnership between the two. Her supervisor, Widowski, had also been part of a video and resource development team for a previous project on how to properly use, clean and maintain captive bolt guns for proper functioning.

FFC worked closely with Casey-Trott throughout her research to help determine the practical advantages of the Zephyr for on-farm use.

The main criteria for a euthanasia tool are: operator safety, rapid insensibility of the subject, consistent results, ease of use and compliance with recognized euthanasia guidelines. Since the Zephyr met all the criteria, Widowski contacted Randall Bock, president of Bock Industries in Pennsylvania, in January of last year to open a discussion about the commercial development of the Zephyr E.

The distinction between the TED and the Zephyr E is that the TED is portable, working off a gas canister, allowing complete mobility around the farm or remote emergency use. While similar, the Zephyr E is designed to connect to a 120-psi air compressor in a fixed location.

As Bock explained, a fixed Zephyr E could have potential applications in a processing facility where a bird may be injured on a truck and it must be dispatched quickly at the receiving dock. On the other hand, if a truckload of turkeys overturned on the road, the driver would be able to quickly dispatch the injured birds by using the TED instead of blunt force trauma.

But why not just use blunt trauma? Bock explained that this change has been driven by the need to have a less dramatic, one-step process to appease the concerns of workers, the general public and consumers. A humane death is important in the eyes of both the consumer and the retailer.

“We’re not repurposing a hammer,” said Bock, “We’re designing a tool specifically to address this need.”

Bock has now sold these tools as far away as Australia, where customers will use them to dispatch emus and ostriches.

Now that the Zephyr is commercially available, it seemed a natural fit that FFC would promote the use of this device by bringing hands-on demos to industry events. The organization has also assisted in the development of educational resources, including an informational video and a fact sheet for farmers.

The Zephyr can be used to effectively euthanize rabbits, piglets and turkeys, as well as chickens, geese and ducks. The next step at Bock Industries will be to investigate the tool’s use in larger animals such as lambs or veal calves.

For more information, you can visit Bock Industries at www.bock-industries.com.