For Ray Heyink of Exeter, Ont., the decision to become one of the first
broiler producers in Ontario to install a solar energy system on his
new barn was not a slam-dunk. 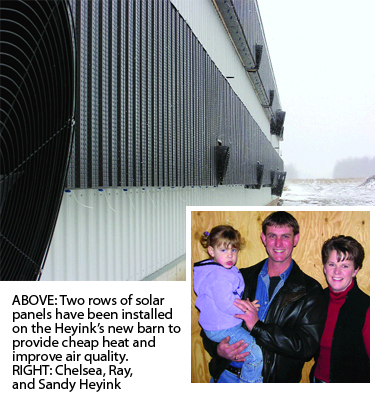 For Ray Heyink of Exeter, Ont., the decision to become one of the first broiler producers in Ontario to install a solar energy system on his new barn was not a slam-dunk.

Heynik and wife Sandy bought the broiler farm in June. It had a five-year-old barn on it and room to expand. When they looked at building a new barn, it was suggested that they consider installing a solar heating system. With energy prices soaring, Heynik decided it was worthy of consideration.

“I was skeptical at first, but producers in Quebec who are using it said they would do it again,” he said, in an interview with Canadian Poultry Magazine.

Having other producers vouch for the system was convincing and so were the statistics on energy and cost savings that Solag, the system manufacturer, had prepared.

When you add in a government program that offsets 25 per cent of the cost of the installation of alternative energy systems, Heyink said the final decision was pretty easy.

The government program is particularly attractive for new barns. It applies not only to the alternative energy system itself, but also to any other ventilation, structural or control systems necessary for it to function.

That means the government contribution can help offset the cost of computer controls, temperature and humidity monitors and other systems.

Heynik, who had been producing eggs in partnership with his brother Al, bought the broiler farm in June with an eye to expand. The farm had a five-year-old, two-storey barn on it and room to build another.

Heyink said he plans to monitor the performance of the system on the new 64 by 322 foot barn and then decide if he will install a system on the five-year-old barn.

Heyink said the older barn is similar in construction to the new barn so what works on one should work on the other.

Real Savaria, Solag’s technical director, says at current energy prices the solar panel system will pay for itself in one to two years.

“After that it’s free energy and better air (inside the barn),” he said.

Because the system heats and brings in outside air it not only warms the barn, but can also reduce humidity and ammonia, and improve ventilation.

While the solar-heating system looks pretty simple and straightforward, it isn’t a “cookie cutter” situation. Each system is designed specifically for an individual building. The ventilation holes are sized to meet each barn’s requirements.

How it works
The system includes: the solar collector, ducts, a control system and fans.

The solar collector is a dark (preferably black) metal surface with perforations for air intake. The black surface absorbs sunlight and becomes warm, heating the air near the black surface.

The perforations let this warm air pass through to the ventilation system and into the barn. The perforations are specifically calibrated (between one and 20 cfm) so that air entering the system is taken from within 1 mm of the panel.

It is essential that this calibration be properly adjusted, Savaria said. A poorly calibrated system can result in holes too small for effective ventilation. Holes that are too big can reduce the effectiveness to the point that it is just a decorative panel, he said.

At night, the panel can act as an R-50 insulator by recovering heat from the wall it is mounted on.

Mike Chambers of Ag-Co Products Limited of Sebringville, Ont. said as energy costs rise “more and more people will be will be looking at alternatives.”

In addition to the solar system, the barn is equipped with four feeder lines per floor and six water lines, each with a fold-down standpipe per floor. There is also one scale per floor.

To supplement the Solag system, Heyink has also installed box heaters. Next year, he plans to put in a high-pressure misting system.