The hen’s keel bone or sternum is particularly susceptible to fractures and deformations. 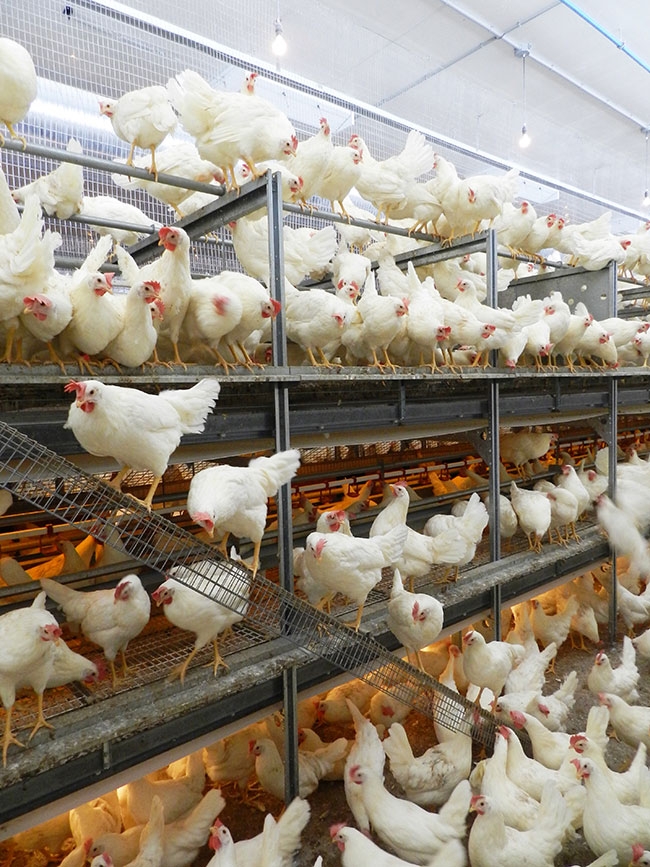 Ramps are highly recommended in aviaries, because hens are much better at jumping up to a perch than down, and falls and collisions often occur as hens descend from higher levels. Photo: Leanne Cooley

Poor skeletal health in commercial laying hens was first documented as a production issue in the 1950s. It became an animal welfare concern in the 1980s, when scientists first documented a high prevalence of bone fractures after handling hens at end of lay.

While researchers have learned a lot about calcium, phosphorus and vitamin D requirements of layers, and changes in nutritional strategies have made ‘cage layer fatigue’ less common, osteoporosis remains a large problem in the layer industry, according to Dr. Tina Widowski, a researcher who chaired the Scientists Committee and worked on the Code Development Committee for the Code of Practice for Pullets and Laying Hens.

Bone strength is a trade-off for egg output and shell strength, notes Widowski, who is also a professor in animal biosciences at the University of Guelph, an Egg Farmers of Canada Research Chair in Poultry Welfare and a director of the internationally known Campbell Centre for the Study of Animal Welfare. She adds that the increased yearly output of eggs over the last five decades has been a major industry change affecting chicken skeletal health.

In the book, the authors note that to support egg production and medullary bone renewal, a sufficient diet for hens contains a lot of calcium, but the rate a hen can deposit calcium absorbed from its feed into egg shells is limited. This means that anywhere from 25 to 40 per cent of calcium deposited into shell, notes Widowski, is drawn from a hen’s bone stores. “This constant demand for calcium for eggs puts extreme pressure on a hen’s relatively small skeletal system,” she observes.

The conventional cage, now being phased out in Canada and in many other countries, exacerbates hen osteoporosis because it limits loadbearing exercise, an activity that is a well-known way to build stronger bones in birds and mammals. Many of the mandates in the updated national layer Code of Practice provide more opportunities for loadbearing exercise than conventional cages, such as the larger space allowances, perches and foraging areas, single tier ‘floor’ housing systems, multi-tier aviaries and enriched colony cages. However, Widowski says these systems also present greater risks for injuries, so it’s important that perches be placed correctly and ramps are used in non-cage systems so that injuries to hens are minimized.

The hen’s keel bone or sternum is particularly susceptible to fractures and deformations. Prevalence of keel bone fractures are reported to range from 20 to 60 per cent in enriched cages and sometimes greater than 85 per cent in non-cage systems. Number and severity of fractures depend on factors such as falls and collisions in non-cage housing, perch use, early onset of egg production, nutritional factors and genetics.

In a recent study, Widowski and Casey-Trott found that keel bone fractures were associated with behaviour differences in hens housed in enriched cages. “We found that hens with fractures rested more on perches, spent less time standing and less time inactive,” Widowski reports. “At this point, however, we don’t know cause and effect – are hens that perch more and are more active more likely to get a fracture when housed in an enriched cage, or are these behavioural changes something that hens do in response to having a fracture? We don’t know yet.”

They recommend the investigation of low-energy non-collision events to determine why hens in cages suffer from keel fractures and deformation. They also recommend studying what causes flock reaction events such as panic and piling, and the development of hens’ locomotor and cognitive skills to determine best rearing practices for pullets.

Additionally, more research on housing design such as perches and ramps, nutrition and genetics is needed. Indeed, the greatest potential for improvement of skeletal health in laying hens may lie in breeding. In the book, Widowski and her co-authors point to research that has found as high as a seven-fold difference in skeletal health among high egg-producing hen lines, and that positive changes in layer skeletal health can be brought about in as few as six generations.

Ramps are highly recommended in aviaries, because hens are much better at jumping up to a perch than down, and falls and collisions often occur as hens descend from higher levels.

Perches and ramps
While perching, jumping and flying are loadbearing exercises that support the building of stronger bones, Widowski notes the angles and distance between perches and provision of ramps between levels in aviaries are very important. She adds that “recommendations outlined in the new Code of Practice were made with minimizing collisions and keel fractures in mind.”

In terms of best perch materials, Widowski notes that while it’s important to have a material that hens won’t slip on, materials that tend to prevent slipping can take with manure, negatively affecting foot health. A trade-off must be reached. In terms of perch shape, she says the best shape for both keel and foot health has been shown to be a mushroom shape, flat on top and rounded on the sides.

Ramps are highly recommended in aviaries, because hens are much better at jumping up to a perch than down, and falls and collisions often occur as hens descend from higher levels. One European study that Harlander-Matauschek co-authored showed that providing ramps in layer aviaries significantly reduced falls, collisions and keel fractures.

Ramp steepness is also important. Harlander’s University of Guelph graduate student Chantel Lablanc studied the abilities of different strains of pullets and hens to climb ramps set at different angles. They found that a ramp angle of 40 degrees or less works for all layer strains. The Code also recommends ramps between the slatted area and the litter area in single tier ‘floor’ systems.

Overall, Widowski advises egg farmers looking at aviary systems to think about how hens are able to jump, fly and move between levels. “Different perches, terraces and levels need to be offset and not too far apart so that hens can easily jump between them to move up and down between different levels without falling,” she says. “This is especially important when food, water and nests are located on different levels. We need to remember that laying hens evolved from ground dwelling birds – they are not really built to fly, but would nest and forage on the ground and only go up in trees to roost at night.”