Advancing the industry while building the family business 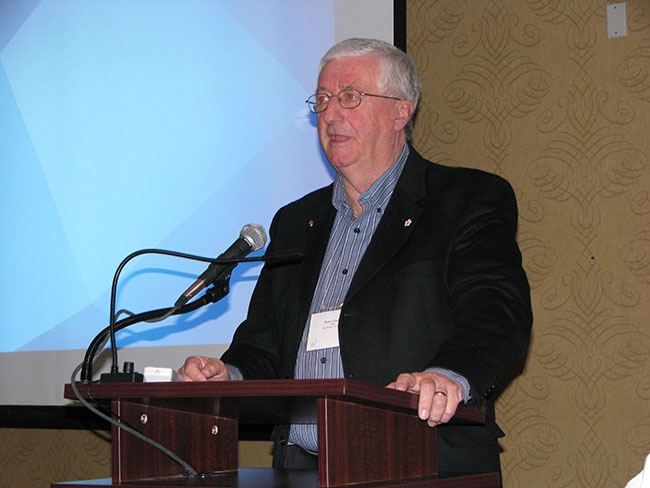 When you look at the career accomplishments of fifth-generation farmer Peter Clarke, it’s clear to see that his dedication to agriculture runs deep. “I am passionate about agriculture and I am proud to be a farmer,” Clarke proclaims.

After attending the Nova Scotia Agricultural College in the 1960s, Clarke returned to the family farm in Annapolis Valley, N.S., to work with his father, Harry, who was mainly a potato grower but was also involved in egg and pullet production.

In the late 1970s, Clarke and his father formed a partnership, until 1984, when he and his wife, Janet, took over the farm. They formed a limited company they named Southview Farms, which owns three farms on 750 acres growing corn, winter wheat, barley and soybeans.

Southview Farms is very much a family operation, Janet operates Clarke’s Trucking, which processes and distributes grains for the farm’s flocks.

Their son Jeff is the operations manager of Southview Farms, Clarke’s Trucking, plus another farm he owns separately. His wife, Kelly, is the farm office manager.

He puts it all in perspective. “The average size of a family egg farm now in Canada is about 25,000 birds and there are approximately 1,000 egg farmers. These are family farms unlike in the U.S. where you can have flock sizes of several million birds. There are some U.S. operations that have more birds than all of the layers in Canada.”

Having family members highly involved in the farm business has enabled Clarke to devote more of his time off-farm to industry groups.

Throughout his farming career Clarke has been a regular on numerous industry organization boards, including in the role of director of Egg Farmers of Nova Scotia, president of the Nova Scotia Federation of Agriculture, chairman of ACA Co-operative Ltd., chairman of Agra Point, the provincial consulting body now known as Perennia, director of the Nova Scotia Winter Grains Marketing Board and Atlantic Grains Council as well as Atlantic representative on the Canada Grains Council.

Clarke also served as Nova Scotia’s representative to the Net Income Stabilization Agency and he was a member of the advisory committee of the Atlantic Veterinary College as well.

In 1995, Clarke was appointed to the Egg Farmers of Canada board as the Egg Farmers of Nova Scotia representative. Over the years, he chaired EFC’s budget, research and production management committees. He became first vice-chairman of the EFC in 2006 and chairman in 2011.

In that most senior role, Clarke helped guide the organization towards notable achievements. For example, during the international trade negotiations for the Comprehensive Economic and Trade Agreement (CETA) and the Trans Pacific Partnership (TPP), his lobbying efforts helped secure continued support for supply management from every major Canadian political party.

Clarke is also proud of EFC’s role in helping to create several poultry research chairs. Universities across the country now have experts focused on issues such as egg industry economics, poultry welfare, public policy and sustainability.

The International Egg Foundation, a charitable arm of the International Egg Commission (IEC), was founded. Tasked with increasing egg production and consumption in developing countries, it worked with EFC on Project Canaan’s egg layer operation in Swaziland. In September 2014, it awarded EFC The Crystal Egg Award for outstanding commitment to corporate and social responsibility.

Clarke’s acumen as a rural businessman was also saluted in 2006 with the Kings County Business Lifetime Achievement Award from the Eastern Kings Chamber of Commerce.

After six years as EFC chairman, Clarke stepped down as a director last March, returning to the family farm and assuming the role as a controller for the IEC. “We review the finances of the IEC on behalf of its membership,” he says.

He believes firmly in the concept of social license. “We are producing a product for the consumers of this country,” he says. “We owe it to the consumers to be as open as possible about the production of that food.” He sees social license as encompassing the issues of animal welfare and care, codes of practice and sharing knowledge of what producers do on the farm. “By being transparent we will not encounter as much challenge to how we operate,” he says.

In 2016, the Canadian egg industry made a decision to transition from conventional cages to alternative housing. By 2026, Clarke believes Canadian egg farmers will be well along into the transition process, which has a deadline of 2036. He cautions, however, “when we do all of that; we have to consider both the health and welfare of our birds as well the people who tend our flocks.”