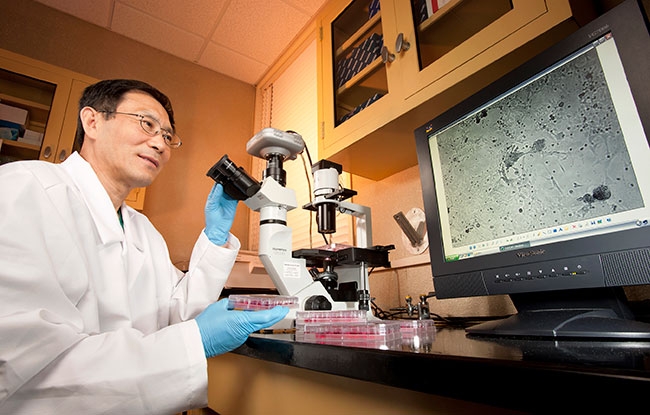 Vaccination is one method used to help prevent the spread of infectious poultry diseases, but current vaccines could be safer and more effective.

At the Agricultural Research Service’s Southeast Poultry Research Laboratory (SEPRL) in Athens, Georgia, scientists are developing vaccines to help reduce virulent virus shedding—excretion of virus by a host—and disease transmission from infected birds to healthy ones.

Microbiologist Qingzhong Yu and his colleagues have created a novel vaccine that protects chickens against infectious laryngotracheitis virus (ILTV) and Newcastle disease virus (NDV), two of the most economically important infectious diseases of poultry. Both viruses cause sickness and death in domestic and commercial poultry as well as in some wild birds throughout the world.

“While current ILTV live-attenuated vaccines are effective, some of the viruses used to make them can regain virulence—causing chickens to become chronically ill,” says Yu. “Other types of vaccines can protect birds from the disease’s clinical signs, but barely reduce the virus shedding in their respiratory secretions after infection. Those vaccines are not that effective, because they do not reduce the risk of virulent ILTV transmission to uninfected birds.”

Most vaccines used in the United States are formulated with NDV isolated in the 1940s. However, since then new NDV strains have emerged that are genetically different, according to Yu.

Worldwide, the NDV LaSota strain has been used as an NDV vaccine. “It is very stable and very effective, and there have been no reports of virulence increase,” Yu says.

In previous research, SEPRL scientists successfully used LaSota strain-based viruses to develop vaccines that protect birds against two other poultry viruses—metapneumovirus and infectious bronchitis virus. Now, in a recent study, Yu used reverse genetics technology, which allowed him to generate new vaccines by inserting a gene from the ILTV virus into the NDV LaSota strain.

The new vaccines were stable and safe when tested in chickens of all ages. Experiments involved more than 100 1-day-old Leghorn chickens and 120 3-day-old commercial broilers. All vaccinated birds were protected against both ILTV and NDV, showing few or no clinical signs and no decrease in body-weight gain.

These vaccines worked as well as current live-attenuated vaccines, Yu says. They can be safely and effectively administered by aerosol or drinking water to large chicken populations at a low cost.

“There is a huge market for these types of vaccines because they can protect poultry from ILTV as well as NDV,” Yu says. “Developing a commercial vaccine that provides better protection against disease would have a positive economic impact on the U.S. poultry industry and also make its products—meat and eggs—less expensive for consumers.”

NDV causes disease in more than 250 species of birds and typically causes respiratory, gastrointestinal, and/or nervous system symptoms. The most severe form of Newcastle Disease can result in disease and mortality rates exceeding 90 per cent in susceptible chickens.

The most recent U.S. outbreak, which occurred in 2002-2003 in California, Nevada and Texas, illustrates the devastation and financial cost that can result: more than 3.4 million birds were destroyed, and the cost of controlling the outbreak in California alone was more than $160 million.

ARS has filed for a patent on the vaccine invention, which has generated interest from private companies that are considering using this research to develop commercial vaccines.

This research is part of ARS National Program #103, Animal Health.

“Novel Vaccines Effective Against Poultry Diseases” was published in the March 2015 issue of Agricultural Research magazine.