Nurturing the Next Generation

Fostering the future leaders of the egg industry 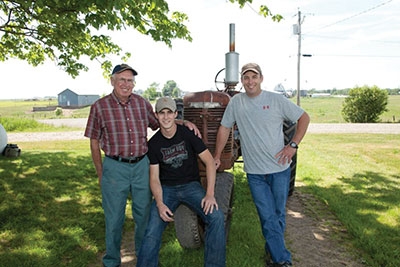 Waking up with the sun is common for Blake Jennings, a fifth generation Canadian egg farmer. Every morning, he walks up to the barn on his family’s farm in Nova Scotia to check on his flock and to make sure everything is running as it should be. No matter the weather or the day of the week, Blake enjoys gathering the eggs that were laid during the night and taking part in the farm’s operations.

Even as a young farmer, he appreciates the unique nature of his lifestyle. He also understands that his family has worked hard along with many other Canadian farmers to maintain and support the system that made things easier: a system we know as supply management.

“Supply management makes it possible for us to expand our family farm and keep the business growing, one generation after the other. We’re able to keep up with technology, farm in ways that are better for our animals and the environment, and to deliver eggs that are among the best in the world to Canadians,” says Blake.

Supply management and the egg industry
The egg industry, like many other agricultural commodities, suffered from the market instability that resulted from two consecutive World Wars. In the late 1960s, the fluctuation in the price of eggs led Canada into a cycle of over-production the industry had never experienced before, bringing the prices for eggs below the cost of production. There was a clear need for stability so that farmers could continue to meet consumer demand.

This led to the system of supply management, which still makes it possible to this day for new generations of farmers to build rewarding careers in agriculture and eventually assume responsibility for and ownership of their family farms.

Recognizing the need to foster future leaders of the industry, Egg Farmers of Canada recently became a sponsor of the Canadian Young Farmers Forum (CYFF). A national call was put out to their egg boards across Canada to nominate young egg farmers, aged 18 to 40, to join them at CYFF’s Annual Meeting that took place in February in Calgary, Alberta. With a delegation of about 10 egg farmers, the representatives of Canada’s egg industry joined attendees from all agricultural sectors and also met amongst themselves to discuss challenges and opportunities in the industry.

Generation next…
As one of the egg industry delegates explained, when you are born and raised on a family farm, following in your parent’s footsteps is not so much a career choice, as it is about how you want to live your life. At 18 years old, Bret Sloboshan from Saskatchewan already understands the value of her family farm. “It’s what I grew up with,” she explains. “It’s not just my immediate family, it’s all my cousins. It’s being a part of a bigger thing. It’s a family business.”

This is a feeling that 22-year old Glenn Coburn shares, knowing he is lucky to be able to take on the family farm. “Farming is not a job, it’s a lifestyle, and I wouldn’t have it any other way. There’s nothing like waking up and walking out the door and you are already at work”, says the young farmer from Keswick Ridge, New Brunswick.

To build momentum coming out of the CYFF conference, Egg Farmers of Canada is bringing some of its young farmers to Ottawa to share their personal and inspiring stories directly with decision makers and politicians. First up is an opportunity for a young farmer from Nova Scotia, David Newcombe, to address participants of the Forum for Young Canadians, an organization that brings hundreds of aspiring young leaders to Ottawa each spring, of which Egg Farmers of Canada is also a sponsor. EFC also featured the next generation at its annual breakfast on Parliament Hill on April 29, 2014 where MPs can mingle with farmers from across Canada over a made-to-order omelette in the Parliamentary restaurant.

The egg industry is filled with newcomers, as one in five egg farmers is first generation farmer. Others are already working on the family farm, taking on increasing responsibility and preparing to take over the operations when the time is right. EFC is shining a deserving bright light on these talented, motivated and aspiring entrepreneurs and leaders who admit that supply management is the key to a stable market and helps them achieve their central goal: providing fresh, local, high-quality eggs from farm to plate.