Use of new generation phytases will help ...

After energy and protein, phosphorus is the third most costly nutrient
in poultry feed. An essential nutrient, it plays a key role in bone and
eggshell formation together with energy metabolism.

After energy and protein, phosphorus is the third most costly nutrient in poultry feed. An essential nutrient, it plays a key role in bone and eggshell formation together with energy metabolism.

Undigested phosphorus passes through the bird’s gut, ultimately causing problems for the environment by polluting water courses. In addition, as the cost of feed ingredients continues to rise, and calcium phosphates become relatively more expensive, there are significant economic considerations to take into account. Adding calcium phosphate to the diet currently adds around $6-7/tonne Cdn to the cost.

As well as reducing potential pollution problems, there are substantial economic benefits to reducing dietary phosphorus levels, provided that bird performance is at least maintained. Phytase feed enzymes improve the digestibility and availability of phosphorus from plant sources. Consequently, a lower level of inorganic phosphorus has to be added to the feed to meet the bird’s requirement, resulting in reduced feed costs and less phosphorus excretion into the environment.

Minimizing Costs
Phytate is the principal storage form of phosphorus in many feed ingredients of plant origin. Most of the phosphorus contained within phytate is in a form which cannot be readily digested by poultry. In addition, phytate binds nutrients such as calcium, energy and amino acids. These bound nutrients are resistant to digestion and unavailable to the bird.

New generation phytases have been shown to be at least 20 per cent more effective than traditional fungal phytases at releasing phosphorus, energy and amino acids from dietary phytate. To fully embrace the greater potential of a new generation phytase,  such as Danisco’s E. Coli phytase (Phyzyme® XP) producers can make greater reductions in dietary inorganic phosphorus, energy and amino acids. The benefits to the egg producer are even greater feed cost savings and reduced costs associated with environmental management. According to the latest feed ingredient prices, egg producers can reduce feed costs by around $8 Cdn per tonne of feed – that's at least $2.30 per tonne more than when using traditional phytases – whilst ensuring that there is no detrimental effect on egg production. 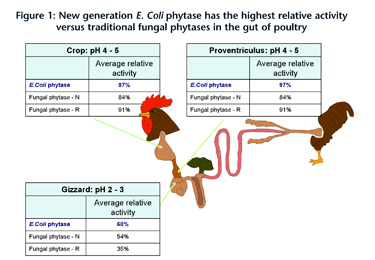 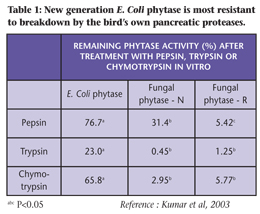 In order to maximize the potential benefits offered by these new-generation phytase products it is vital to fully appreciate, and account for, their greater efficacy compared with traditional phytases when formulating poultry diets.

Compared to traditional fungal phytases, a new generation E. Coli phytase is more resistant to breakdown by the bird’s own pancreatic proteases, as well as having a higher relative activity over a wider pH range in the gut. This means that the new generation phytase is more effective throughout the digestive system compared to other leading phytase products (refer to Table 1, Figure 1). 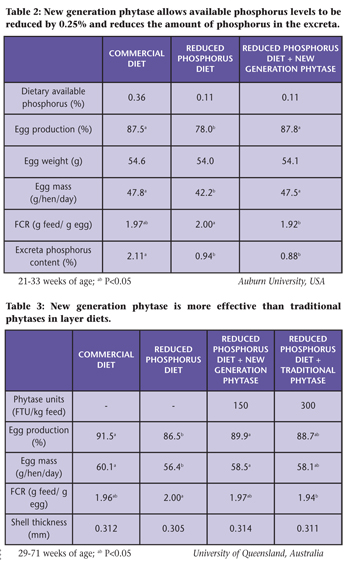 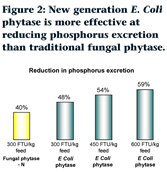 The new generation phytase maintained egg production, egg weight and egg mass to the same level as the standard commercial diet and improved feed conversion (FCR) by five points. The amount of phosphorus in the excreta was also significantly reduced by around 55 per cent (refer to Table 2).

Trials conducted in Australia, China and Taiwan highlighted that between 25 and 50 per cent fewer phytase units were required to produce equivalent laying hen performance compared with using traditional phytases (refer to Table 3).

MAXIMIZING VALUE
Danisco Animal Nutrition has recently launched Phycheck™, an innovative new service which offers feed manufacturers and egg producers the opportunity to maximize feed cost savings when using Phyzyme XP.  Traditional use of fixed nutrient matrix values for phytase in feed formulation fail to acknowledge that the response to phytase varies according to factors such as dietary phytate level and phytase dose.

At the core of the Phycheck service is a unique software program that calculates customer-specific matrix values for phosphorus, calcium, amino acids and energy according to phytase dose rate and dietary phytate level. By using these scientifically proven matrix values, nutritionists can optimise use of phytase to maximise their feed cost savings, without risk of compromising laying hen performance.

MINIMIZING ENVIRONMENTAL IMPACT
Increasing legislative pressures will undoubtedly force producers to focus further on reducing the environmental impact of their farms. Producers should therefore embrace and fully exploit technologies which reduce the risk of damaging the environment.

As phytase use continues to grow and product choice for egg producers and feed manufacturers becomes more diverse, so does the need for reliable tools to compare and optimize phytase use to give maximum economic benefit at the same time as minimizing the environmental impact of egg production. Phycheck enables feed producers to take advantage of the leading-edge performance of this new generation phytase, which offers unrivalled performance and value. n

Dr. Milan Hruby, who has an M.Sc. and Ph.D from the University of Minnesota, is Danisco Animal Nutrition’s Regional Technical Services Manager for Canada and the U.S.