Omega-3 Chicken Soon to Be Launched

Prairie Orchard Farms Inc. founder and president Willy Hoffman has just
done for chicken what he has already done for pork and bacon. 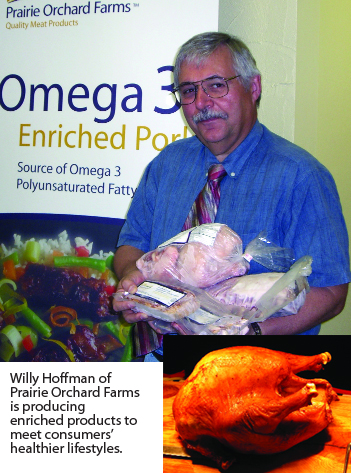 Prairie Orchard Farms Inc. founder and president Willy Hoffman has just done for chicken what he has already done for pork and bacon.

The company was awarded regulatory approval by the United States Department of Agriculture (USDA) in early May and from the Canadian Food Inspection Agency (CFIA) in June to market chicken with an Omega-3 enrichment designation.

It Began With Pork
In 2005 Prairie Orchards launched Just Pork™, produced with alternative feed ingredients free of medications, GMOs, and animal byproducts. “I was looking for a way to add value to meat,”  says Hoffman.  “I looked into organic and natural products.  Then I decided that I wanted to do something a little different.”

Hoffman says his original idea was to process pork products from hogs raised on a diet rich in minerals and vitamins, particularly Vitamin E, and with ingredients (such as canola and flax) that would provide Omega-3 fatty acids. He established a working relationship with a western Manitoba hog producer, set up random samplings and received CFIA approval in April, 2005 to go ahead with marketing and distribution.

SELENIUM
Prairie Orchards recently began adding selenium to the diet, a mineral that many people and  animals are lacking in sufficient quantities and that is known to have positive effects on the immune system and possibly Alzheimer’s disease.

Hoffman says producing value-added meat is “more interesting, gives consumers the options they want,  and it’s an opportunity for producers to make more money for the products they grow.”

Omega-3 Chicken
Hoffman says that last summer, Manitoba-based Focus Feeds Inc. suggested he try the same type of enrichment for broilers.  The feed company works with numerous poultry farms in the province.  Trials began with thousands of chickens and concluded in December 2006.

Just as they did with pork, Prairie Orchards has also included selenium as part of the enrichment.  “In our trials, we found that the chicken provided between 80 and 100 per cent of the human daily requirement for selenium,” says Hoffman.

Future plans
Hoffman says that he has an agreement with Focus Feeds in Winnipeg toproduce the Omega-3-enhanced chicken.  With CFIA approval, he says that “now we can talk in earnest about selling the products in the market.  Before we had approval, it was talk.”

Hoffman says the Praire Orchards has been approached by several companies to research Omega-3 enhancement for turkeys. He is also excited by the prospect of marketing the product in other countries.  “There is less of an ethnic barrier to chicken than there is to pork,” he notes.

Hoffman is also planning the com-pany’s next move.  He says that  Prairie Orchards has  begun working with a Manitoba fish farm to try to design some value-added features in that sector. n