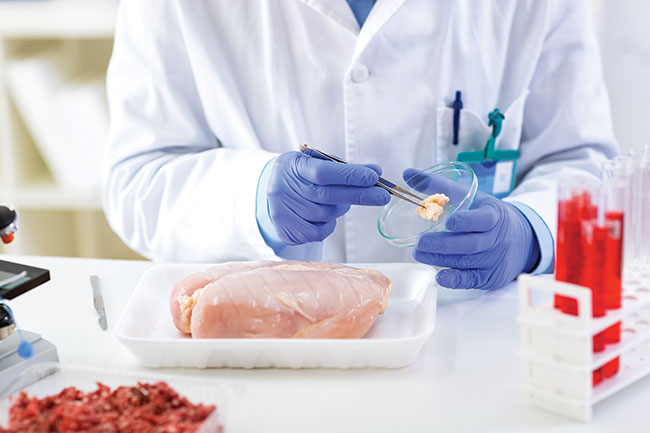 Salmonella is among the leading causes of foodborne illness in Canadians. Thus, it’s important for everyone in the poultry supply chain to take steps to address this issue. It’s an ongoing challenge for the sector, though, as there is no blanket solution that will work on all farms.

That’s according to leading salmonella expert Chuck Hofacre, president of Southern Poultry Research Group and Professor Emeritus at the University of Georgia. Rather, he says, success requires farm-specific approaches.

“Not all salmonella is the same. There are 2,500 different serovars of salmonella and they all behave differently. So, our strategies will be different depending on which one we are trying to control,” he noted during a presentation at Poultry Health Day hosted by Poultry Industry Council this past fall.

“We need to look within our own area of responsibility of the poultry business and recognize that salmonella can be transmitted from mother to offspring,” he added, referring to a U.S. study of 49 poultry farms where salmonella found at the primary breeder was genetically identical through all the generations right into the processing plant.

In Hofacre’s opinion, most transmission from one generation of birds to the next occurs through feces contamination on the eggshell. Hence, shell cleanliness is key to successful salmonella control.

Flock management significantly impacts a farm’s salmonella control program. Although there are many potential sources of the pathogen on-farm, Hofacre stressed the importance of farmers focusing on the principle causes on their specific farm and taking steps to address those.

Here are his tips for controlling salmonella on the farm.

Rodents and insects
The three types of rodents common in North America are the house mouse, roof rat and Norway rat. It’s important to identify which rodent is present in a barn because the species determines the location of the bait. Control of the roof rat, which lives in ceilings, won’t be successful if the bait is placed around the perimeter of the building, for example.

Rodents can be a significant source of salmonella on farms. They come indoors in the fall looking for a warm place to escape the winter. When cleaning and disinfecting a barn, pay attention to rodent control as well so they don’t just come back into the barn once a new flock of birds arrives.

Beetles are common throughout North America, and turkeys’ and broilers’ natural tendency is to eat a beetle before eating their provided feed. According to Hofacre, research has shown that salmonella can live inside beetles for 60 days, so controlling those populations is important.

“Beetles go into the walls when we clean out a barn and come back when the birds do. If we have a barrier of insecticide around the inside surfaces of barns, the beetles and other insects have to migrate through that barrier when they come back inside,” he said.

Feed
Most of the time, feed isn’t the main source of salmonella outbreaks, Hofacre said, but it can be. Producers of breeders in particular should ensure their feed is decontaminated, heat treated and pelleted, and that pests are controlled in the feed mill.

Water
Drinking water can be a source for salmonella, producing a biofilm in watering systems. Research has shown that chlorination can have a significant effect on lowering salmonella and getting rid of the biofilm in the water system.

Litter
According to Hofacre, litter isn’t necessarily a source, but it can produce a favourable environment in which the salmonella can grow. The pathogen likes an alkaline environment, so acidifying the litter will make it harder for salmonella to grow. He suggested treatments with propionic acid, aluminum sulfate or sodium bisulfate.

“What I’ve learned over the years is that nothing works all the time, and nothing works if the level (of salmonella) is too high,” he said. “And if a flock is colonized, it’s hard to eliminate but you can keep the numbers down.”

Interventions
Altering birds’ normal gut flora through the use probiotics, yeast products or organic acids, for example, can help chicks do a better job of resisting salmonella establishing in their systems.

Hofacre noted that as little as one salmonella cell can infect a newly hatched chick, but it can take up to one thousand or even one million cells to infect a healthy bird. So, establishing a healthy gut as soon as possible in a chick’s life will go a long way to protecting them.

A vaccination program for broilers or even at the breeder level will also help with salmonella prevention. And how a farm manages other disease challenges, like coccidiosis, will also impact salmonella control success, he added.

The takeaway
“No single type of response likely provides a solution. Salmonella is complex and there is no silver bullet, magic potion or single remedy to control it. You need multiple interventions to be successful,” he concluded.

To get a better understanding of Salmonella enteritidis prevalence in Canada, Chicken Farmers of Canada launched a national surveillance program in January 2020 (see sidebar).