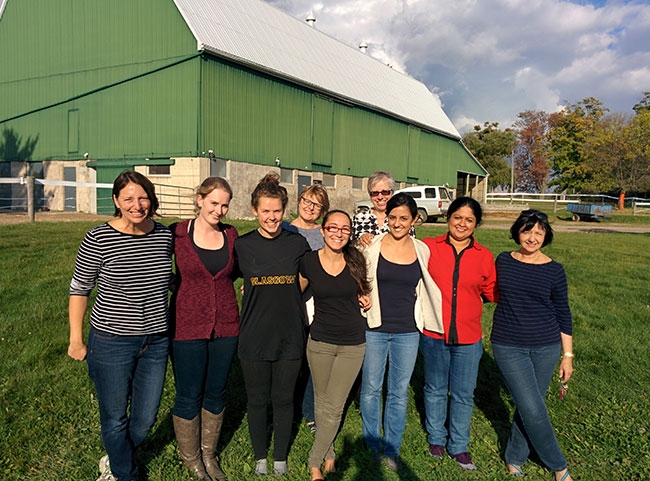 Pictured is most of the research team, including (from left to right): University of Guelph (U of G)’s Stephanie Torrey, Caitlin Woolcott, Bethany Baker, Tina Widowski and Lilia Serpa; Karen Schwean-Lardner of the University of Saskatchwan; and U of G’s Elein Hernandez, Amila Bandara and Linda Caston. photo courtesy of Stephanie Torrey

When poultry become sick, injured or exposed to the risk of disease it may become necessary for farmers to perform an effective and humane cull. Some of the methods currently available include cervical dislocation, carbon dioxide and the use of non-penetrating captive bolt devices.

In order to facilitate science-based recommendations, a collaborative team led by Tina Widowski and Stephanie Torrey at the University of Guelph (U of G) recently completed a multi-year project examining multiple on-farm killing methods for broilers, layers, breeders and turkeys. Collaborators included U of G’s Patricia Turner, Karen Schwean-Lardner of the University of Saskatchewan (U of S) and Suzanne Millman of Iowa State University.

Torrey is a senior poultry research scientist. As she describes, any method of euthanasia needs to provide rapid loss of sensibility followed by a quick cessation of respiration and cardiac arrest that indicates death. In a series of recently completed research studies, Torrey and several other poultry scientists evaluated some of the currently available methods of euthanasia from an effectiveness and animal welfare point of view.

Manual Cervical Dislocation: Is a tool better than a trained hand?
The process of manual cervical dislocation is a common and effective method of killing poultry but it can be difficult emotionally on those performing the task. Use of this technique is further restricted in the European Union, where legislation has limited the use of manual cervical dislocation to birds weighing less than three kilograms and to 70 birds per person per day.

To address these limitations of use, R. Amila Bandara, as part of her PhD research at U of G with Widowski and Torrey, investigated the efficacy of a novel mechanical cervical dislocation device for use in layer hens.

Humane killing methods may be required for turkey poults between four and nine days of age that may have developmental abnormalities or unthriftiness which may pose a risk to the rest of the flock but up until now, no studies have investigated euthanasia methods for these particular birds. Cervical dislocation is commonly used but it can be difficult on both larger birds and very small birds, leading to the development of a scissor-like mechanical cervical dislocation device known as the Koechner Euthanizing Device (KED).

In this experiment, birds aged one to three weeks were assigned to three groups – awake, lightly anesthetized manual cervical dislocation and lightly anesthetized mechanical dislocation. The use of anesthetic did not affect jaw tone, an indicator of insensibility, or pupillary light reflex, used as an indicator of brain death. However, it did allow for critical brainstem reflexes to be assessed while minimizing pain and distress to the birds.

Carbon Dioxide: Ask the birds
The use of carbon dioxide is a common method of chemical euthanasia. Birds are chemically asphyxiated by the introduction of CO2. But, at what level would CO2 cause discomfort for the birds? In conjunction with professor Suzanne Millman from Iowa State University, Bandara investigated the aversion of turkeys to increasing levels of CO2.

Typically, aversion has been measured by visual cues such as gasping and head shaking prior to the loss of posture, indicative of insensibility. But in this study, researchers decided to simply ask the birds.

Eleven four-week old turkeys were subjected to a preference test. Birds were initially trained to enter a treatment chamber for food reward. Over the course of several days, the birds were then exposed to 25, 35, 50 or 70 per cent CO2 concentrations in the treatment chamber.

The birds were removed from the chamber for recovery and exposed to treatment on consecutive days. The research results suggest that a 25 per cent CO2 level is effective, not causing aversive behaviour while causing loss of neck tone indicative of loss of consciousness within less than one minute.

Pictured is most of the research team, including (from left to right): University of Guelph (U of G)’s Stephanie Torrey, Caitlin Woolcott, Bethany Baker, Tina Widowski and Lilia Serpa; Karen Schwean-Lardner of the University of Saskatchwan; and U of G’s Elein Hernandez, Amila Bandara and Linda Caston.

CO2 induction
To evaluate carbon dioxide induction methods for the euthanasia of day-old broiler chicks, Bethany Baker, as part of her PhD research at U of S with Schwean-Lardner, evaluated different CO2 induction techniques for their effectiveness in minimizing distress and inducing a rapid loss of sensibility and death.

A total of 110 cull chicks were either immersed in 100% CO2 or exposed to gradual displacement rates of CO2. Through monitoring behavioural responses such as head shaking or gasping the researchers were able to assess the welfare of the chicks up until loss of posture, which indicated insensibility, and cessation of movement and rhythmic breathing, indicating death. Overall, the least distress and the quickest death occurred with complete immersion in CO2 compared to gradual displacement rates.

In this study, three common commercially available models, the Zephyr-E, Zephyr-EXL and Turkey Euthanasia Device (TED), were assessed for time of loss to insensibility and degree of brain damage for four groups of male and female layer chickens ranging from 10 to 70 weeks of age.

As with other methods of euthanasia, the intent was to assess the time required for the onset of insensibility and cardiac arrest to determine if these tools provided a humane and effective death.

A captive bolt is often used in larger animals such as cattle or sheep, but frequently requires a second step so that the animals do not return to sensibility. In layer chickens, however, the use of all three devices resulted in rapid insensibility through significant trauma to the midbrain and spinal cord and can be recommended as a humane one-step euthanasia device for all ages of layer chickens.

All three devices are applied perpendicular to the frontal bone, just behind the comb on a mid-line between the eyes and ears. Application causes a loss of the pupillary light reflex, nictating membrane reflex and breathing within five seconds of application by direct or indirect trauma to various regions of the brain, quickly leading to functional disruption and rapid brain death.

Slight differences were noted between the Zephyr devices that were attributed to the different shape of the bolt heads – flat on the TED versus round or conical on the Zephyr models – that delivered the force to and through the skull.

External damage was evident on over 80 per cent of the birds, indicating a need to balance effectiveness with aesthetic and biosecurity concerns. While the Zephyr-EXL may be effective with lower air pressure levels in an attempt to alleviate external damage, based on their observations, researchers recommend using the Zephyr-E in particular at 120 psi in layer chickens of all ages and weights to optimize its effectiveness.

Other non-penetrating captive bolt devices are commercially available for layer chickens. For example, the Shelvoke Cash Poultry Killer is effective but heavier and more difficult to use. The researchers suggest that further evaluation is required on other lightweight, pneumatically powered devices.More research results using slightly different methodologies or birds are currently in preparation or review at various journals.