Homegrown feed production has many advantages

Homegrown feed production has many advantages.  Most poultry feeds have traditionally been manufactured in large
com-mercial feed mills, utilizing pelleting technologies to improve the
digestibility of feed grains and meals. 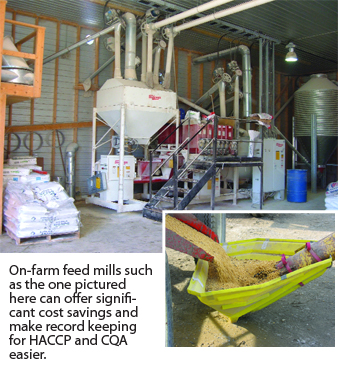 Most poultry feeds have traditionally been manufactured in large com-mercial feed mills, utilizing pelleting technologies to improve the digestibility of feed grains and meals. Commercial feed manufacturing improves feed utilization by reducing the particle size of the grains, steam processing partially cooks the cereal and the final pellet form reduces feed wastage. All these factors contribute to improving the conversion of feed to weight gain resulting in increased average daily gain. The improvement in feed utilization averages to a 4-6 % advantage for commercial pelleted feeds compared to non-pelleted feeds.

However, with increasing amounts of compelling performance results being generated with on-farm mash feeds and significant potential cost savings, progressive producers are taking a serious look at this opportunity.
As poultry farms become larger and more land-based with farmers growing grains on their operations, the potential savings from making feed on the farm increase significantly. Also, as farm holdings become larger, many farmers seek to diversify their operations by adding poultry to their operations. Some of these farmers have made feed on the farm for other livestock such as dairy and/or swine, and so feed manufacturing is not a foreign task.

Recent advances in computer technology have resulted in the development of automated, systems designed specifically for the manufacture of feeds on farm. Modern on-farm mills are accurate and provide flexibility to producers, allowing operators to perform many other functions throughout the day as feed is manufactured independently by automated equipment. These newer systems, with digital information storage, also provide valuable records of feed manufacture and ingredient usage, which are now required by on-farm HAACP or CQA food safety programs.

The typical design for a farm feed manufacturing system for poultry includes: a cluster of ingredient bins for storing grains, protein meals, and premixes, a fat tank, a  mixer/scale for weighing and mixing the ingredients, load out bin(s) for the final feed(s) and a computer to control the entire process.  In most on-farm feed manufacturing systems the scale and the mixer are a combined unit, whereas in commercial mills these are separated, to save time in the manufacturing process. With a little training and advice producers can utilize this modern equipment to make feed on farm that is every bit as good in quality and consistency as a commercial feed mill.

Manufacturing a high quality feed requires the production of consistently uniform feed, from batch to batch. Consistency of the feed mix ensures that each bird, regardless of age, receives daily all the nutrients essential for maxi-mum growth. Uniformity is measured by the consistency of analysis between 10 different samples taken equally over the batch. This uniformity is expressed mathematically as the “coefficient of variation” (CV).  This coefficient of variation is determined by collecting 10 sequential samples of feed and analyzing each for a nutrient that is provided by one ingredient. While sodium is usually used for such determinations, Grand Valley Fortifiers typically does an analysis for all the major nutrients of the feed (protein, fat, calcium, phosphorus, sodium, iron, zinc, manganese and copper).  The reason for using so many nutrients in the calculations is that collectively these nutrients determine the performance of the birds consuming that feed.

For each nutrient, the mean or average is calculated and then the standard error of the mean is determined. The standard error is a measure of the variation of the numbers that are used to calculate the mean. This variation is then compared to the mean by dividing the standard error of the mean by the mean and this number is expressed as a percentage.  This is called the coefficient of variation. The larger the coefficient of
variation the poorer the feed is mixed. Typically a CV of less than 10% is considered an indication of good mixing, while a CV of less 5% is considered an indication of an excellent mixed feed. Figure 1 (page 46) shows the relationship between the coefficient of variation and piglet performance. As the CV of the feed decreases the feed efficiency improves and the average daily gain of animals fed these feeds increased. In animal studies performance increased as feed CV decreased to 5%.

Of all the factors affecting how uniform the feed is, no other parameter has as significant an effect on feed quality as the time of mixing. Mixing time refers to the period of time that the ribbons/paddles/augers run after the last ingredient has been added until the mixer begins to empty and discharge its contents. While mixer design does have a significant effect on the quality of the feed produced, most mixers do a good job if allowed enough time to adequately mix the feed. Depending on mixer design the time required to produce a uniform consistency differs. Traditionally tumble mixers require the most amount of mixing time while ribbon mixers require the least, with vertical auger mixers somewhere in between.  Figure 2 (page 49) shows the effect of mixing time on the change in CV of the feed mixture.

The mixing time should allow for the ingredient that takes the greatest time to be distributed throughout the feed to be mixed in. Typically, ingredients that represent a large proportion of the mix require less time to attain a uniform mix compared to those ingredients that are added in small amounts. Ingredients that provide a large proportion of a particular nutrient in the feed will have larger impact on the uniformity of that nutrient than an ingredient that provides a smaller proportion of that nutrient. The particle size and the form of the ingredient affect the time required to distribute that ingredient throughout the mix. Liquid ingredients, such as fat, require a longer mixing time compared to dry ingredients; this is due to the fact that fats initially form balls in the feed, which subsequently have to be broken apart to be mixed into the feed. Providing fat as a spray onto the feed reduces balling and reduces the time required to attain a uniform mix.

Ingredients that are added in small amounts usually require more time to find their way throughout the mix and so require a longer mixing time. Premixing of these low inclusion ingredients has a significant effect on the ability of these to be better distributed in the feed in a shorter period of time. Premixing also improves the CV of the nutrients provided by the premix. Ingredients such as trace mineral, vitamins and some medications, which provide most or all of a particular nutrient or medication, benefit most from being included in a premix. Depending on the mixer design and the time allocated to mixing, increasing the amount of premix used in the feed may further aid in the distribution of the micronutrients throughout the feed.

Ingredients such as fat not only provide a source of energy, but also function to hold the ingredients together in mash feeds; much like a pellet does in commercially manufactured feeds. Adding fat to the feed is also very advantageous to bind the constituents of the feed where the particle size differs between ingredients. Adding 1.5 – 2% fat provides good binding of the feed ingredients. Adding large amounts of fat, as in turkey feeds, provides excellent binding but challenges the movement of the mix in feed systems. Reducing the speed of fat application and spraying the fat thinly onto the dry ingredients will improve not only the distribution, but also the handling characteristics of the final feed. This, however, adds to the time required to mix the feed properly.
Another factor that has an effect on the uniformity of the feed is the order in which ingredients are added to the mixer.  As previously stated, different ingredients require different times to be distributed uniformly in the mix and with on-farm feed manufacturing, all ingredients are added to the mixer while the mixer is continuously running.  A typical schedule of order for adding ingredients to the mixer is as follows:
•  Corn
•  50% of the Fat
•  Premix
•  Medications
•  Protein meals
•  Remaining 50% of the Fat.

One often forgotten aspect of the feed manufacturing process is distribution of the feed. Mishandling mixed feeds can result in feed separation after mixing. Feeds that have very little fat, that is less than 2% added fat, have a tendency to separate when blown as the particles with different densities travel at different speeds in moving air. These feeds should be augered or blown more slowly, where possible. Feeds with high fat contents have less of a tendency to separate and can be blown at higher air speeds. These precautions will ensure that the feed, which was correctly manufactured, is delivered to the feeder.

Earlier we spoke of the advantages of pelleted feeds; now we should mention some of the benefits of mash feeds. One of the advantages of mash feeds is the health of the gut of the bird. Birds fed mash feeds retain feed in the crop for a longer period of time compared to pelleted feeds. As a result, the pH of the crop is lower with birds fed mash compared to pellets, as there are more lactic acid bacteria present in the crop of birds fed mash feeds. Furthermore, with the high temperatures used in commercial feed processing today, the feed is virtually sterilized of its native bacteria, this allows other pathogenic bacteria the opportunity to fill that “population gap” after the feed is ingested. This improved gut health from birds fed mash may be evident by the litter being drier with birds fed mash compared to birds fed pellets, though this is largely anecdotal.

In commercial mills feed ingredients are ground quite fine to improve pellet quality. Despite this difference in particle size, the feed conversion of birds fed mash feeds is often as good as birds fed pellets, though these feeds may have been formulated to differing nutrient contents. In mash feeds, while the grains are not ground as fine, there is sufficient grit in the feed from the limestone for the gizzard to function well and reduce the grain particle size, prior to digestion. One advantage to pellet fed birds is that the birds will often be 1-1.5 days ahead in growth compared with mash fed birds, especially at lighter weights (less than 2.2 kg birds). Offsetting this slower rate of gain for mash-fed birds is lower mortality, resulting in more birds paid for. Another advantage to feeding mash feeds is the reduction in the number of birds condemned, which again further increases the amount of birds paid for. This we think is due to the birds feeling fuller for longer periods of time and so there is less competition around the feeders.

Lastly, and most importantly, producers with on-farm feed manufacturing typically enjoy substantial cost savings on their feed. This discussion can quickly become very complex but on average producers who decided to invest in modern mixing equipment are saving $25-30/tonne on broiler feed and $40/tonne on layer feed.
Manufacturing poultry feeds on farm is a profitable option, especially for producers growing their own grains. Today there is modern computerized equipment, which automates the manufacture of feed on the farm. The order of ingredient addition, mixing time and feed distribution, all have a significant effect on the quality of the feed produced. Correct sampling and chemical analysis are important tools in determining the efficacy of the mixing system. Feed mixing systems with a CV less than 10% produce good feeds while CVs of less than 5% are indicative of excellent quality feeds. Focusing on the uniformity of the feed manufactured ensures the maximization and consistency of performance of animals fed these feeds. n