Flying their way to your local supermarket 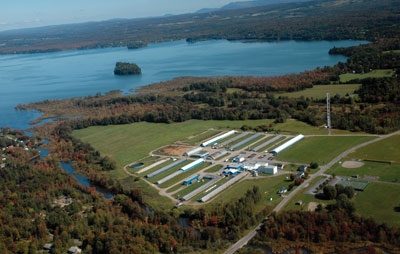 Lacquered Peking ducks hanging in Chinatown storefronts never go unnoticed, and who would guess that these birds have been raised near a beautiful Eastern Townships lake for the past 100 years?

Brome Lake Ducks is celebrating its 100th anniversary and could very well be Canada’s oldest farm dedicated entirely to poultry. But today, its brand and products are found far beyond Chinatown.

The story begins in 1912, when American Henry Bates chose the west shore of Brome Lake to establish a Peking duck farm, with the New York market in mind. Two years later, his son Arthur moves the farm to the east side of the lake, where it stands now. To manage this, buildings were hauled over the frozen lake using horses.

Back then, ducks had access to the lake during the summer, in order to be raised in a ‘’natural’’ way. They swam happily, but the herd’s health and mortality rate seemed to suffer. Duck meat was produced primarily for Chinese immigrants, but also for wealthy patrons of steamship lines, transcontinental railways and fine restaurants.

When a rumour spread about a clothing manufacturer eyeing the property as a location for a factory, Sen. George B. Foster and other wealthy Knowlton summer residents bought the farm together.

In 1939, the business was taken over by Foster’s son and a Montreal businessman who wanted to save the area from industrialization and create local employment. In 1965, Foster’s son became the only owner and later transferred the farm to his two daughters.

From 23,000 ducks in the beginning, Brome Lake Ducks grew to an annual production of 500,000 by 1990. The following year, the current president and chief operating officer, Claude Trottier, was hired.

‘’When I arrived, I went to meet our clients. Their perception was that our duck was very fat,’’ Trottier said. Ducks are migrating birds and it is natural for them to build fat, but Trottier added that this fat is much healthier than that of most other animals.

A genetic selection program was launched shortly after, mixing local Peking ducks with others from Europe and Asia. The goal: more meat, less fat and great taste. With these advancements feed conversion rates and hatching rates also improved. Brome Lake Ducks gained in quality and clients acknowledged it.

In the mid-1990s, Mario Côté, a Quebec businessman, and Joe Jurgielewicz, a veterinarian and Peking duck farmer from the United States, purchased the business. The new owners wished to develop new products, open new markets and enhance production and transformation facilities, which allowed production to rise to two million ducks.

The farm is now fully integrated. Eggs are laid and hatched at the hatchery at the main location in Knowlton and day-old ducklings are sent off in the company’s own trucks to be raised at the Racine farm or on contract with local farmers. They are all sent back to Knowlton to be slaughtered and prepared for sale.

When avian influenza struck British Columbia in 2004, export markets were suddenly closed off. ‘’We used to sell a lot to Japan and Mexico,’’ Trottier recalls. ‘’We lost 35 per cent of our sales for a case of avian flu 5,000 kilometres away!’’

This ordeal gave a new direction to the farm. ‘’We no longer wanted to depend on situations we couldn’t control. We started to work on our local market, making our product accessible to all,’’ Trottier said.

Getting Quebec consumers to know about duck meat and to include it in their diet was the main target of marketing efforts. In-store tasting, promotions, recipes, a website (www.bromelakeducks.com) and more were used to promote new cuts and new ready-to-eat Brome Lake Ducks products. The campaign was such a success that today, 80 per cent of sales are made in Quebec.

The full product line is available at the farm store in Knowlton and the company’s store in Montreal, called Le Canard libéré, espace gourmand. The most popular products can be found in supermarkets all across Quebec and are becoming available in other provinces.

“This is an upscale and high-quality product, but the pricing is very reasonable,’’ Trottier says. ‘’The price compares to that of lamb, veal or some of the best beef cuts.’’

However, production costs are higher than for other poultry productions. Ducks need fresh bedding of wood shavings every day and state-of-the-art ventilation. Unlike other poultry sectors, Brome Lake Ducks is backed by its own research and development, from genetic improvement to slaughterhouse efficiency.

Peking ducks are not force-fed, nor are they used to make foie gras, Trottier says. Birds are finished at 42 days, weighing around 3.2 kilograms. The food conversion rate is at 2.2.

With 200 employees, the production has now reached 2.2 million ducks per year, without the purchase of any quota! However, without supply management, the company is exposed to imports from countries that take advantage of the fact that local consumers are now familiar with duck meat.

Over the coming years, Brome Lake Ducks will keep reinforcing its century-old brand, in Quebec, and with growing efforts in other provinces such as Toronto, Calgary and Vancouver.