Chicken Farmers in Ontario have a new tool 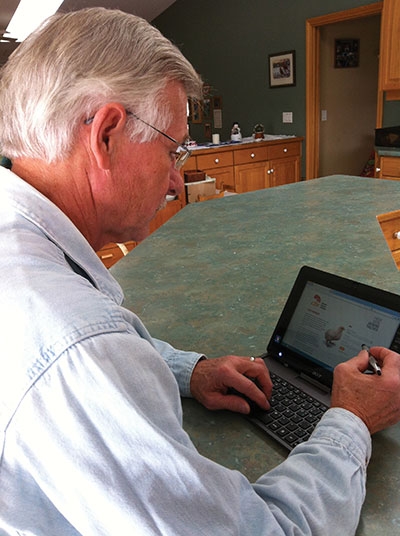 The needs of the poultry industry are changing and Chicken Farmers of Ontario (CFO) is investing in enhanced capabilities and capacity to deliver that change. That investment began with the introduction of the CFO Flock Manager program in 2013.

Flock Manager is an online reporting system that has created a more efficient way of filing the familiar Form 3’s and 6’s that broiler farmers have always submitted to report flock production and marketing. The electronic filing system simplifies the process, eliminating legibility issues, reducing the number of incomplete forms by forcing data entry in required sections of the form, and significantly speeding up the transfer of information.

“It used to be a seven- to 10-day gap with the form ‘in the mail,’ ” said Cathy Aker, CFO’s manager of quality and risk management. While the system will eventually be used by all farmers, Aker said that the early adopters have been critical in helping to shape and refine the reporting system.

So how has it worked so far?

Mike and Leonie Vander Meer and their son Daniel operate a broiler farm in Wellandport, Ont. When they first heard of the opportunity to participate in CFO’s Flock Manager electronic form trials, Mike was a little hesitant – he didn’t spend a lot of time with a computer – but Leonie said, “No, we should do this.”

“The first attempts at electronic filing with Flock Manager involved at lot of phone calls,“ Leonie remembers, “and a bit of technical frustration in the wee hours of the morning as the chickens ship out somewhere between midnight and 8 a.m.”

Mike and Leonie soon discovered that the program worked better with Fire Fox than Internet Explorer. Webinars were available to help coach them though the forms and in the early stages they appreciated the opportunity to provide suggestions for refining the forms. They have since purchased a tablet in order to be more mobile. It took only a few crops for Mike to become comfortable with using Flock Manger on the tablet on his own.

Leonie encourages those still hesitating to attempt the electronic filing to try it, as it is easier to grow along with the program than playing “catch up” later on.

Tim Klompmaker is a chicken farmer from Peterborough County, farming there since 1984. He is also the CFO board director for District 9 and chair of the Farm Operations and Sustainability committee. Klompmaker was involved in Flock Manager at the committee level at CFO, but as a farmer he became involved when his processor, Farm Fresh Poultry Co-operative, agreed to participate in the traceability pilot project.

From his farmer perspective, Flock Manager was about helping to eliminate the need for paper forms and allowing the quick and efficient flow of information electronically between CFO, farmer, processor and hatcheries. From a risk management perspective the new program would allow for quick access to information and the ability to react promptly in the case of a disease outbreak.

As a farmer, Klompmaker sees Flock Manager as “a work in progress.” He recalls that, just the way their schedule worked out, they were both shipping from one farm the first week of the program and placing chicks at their other farm. “We were basically the guinea pigs for the program so it was time-consuming initially,” he said, but as far as adapting to the new program it was a relatively easy transition since the online forms are not significantly different from the paper forms.

With his director hat on, Klompmaker would like to expand the program so that as much reporting as possible will be done online, including but not limited to the On Farm Food Safety Assurance Program (OFFSAP) and Animal Care Program (ACP).

In July 2013, Paul Bakker used Flock Manager for the first time. He was “pleasantly surprised,” especially with the 24-hour support line provided by Earl Thomson. “There will always be some bugs,” said Bakker, who farms near Belwood, Ont.

His involvement as a member of the processing co-operative Farm Fresh Poultry, a company that has now gone entirely paperless for the Form 3 and 6, helped him to decide to become involved early. To him, Flock Manager was “long overdue.” Bakker doesn’t consider himself to be super tech savvy but he is familiar with computers. “It’s just clicking buttons,” he said, so it wasn’t a big jump for him to handle the computerized version of the familiar forms.

When he first started with Flock Manager he found himself going back and forth to the barn while entering all the information, but now it’s streamlined – he just passes it off to the driver and it’s done.

“There’s nothing I’d change,” said Bakker. All of the information is in drop down boxes on the computer screen, making selections easy. He reports that the interface is intuitive and very simple, and the support team can fix things in real time, 24/7. If you’re sitting on the fence about Flock Manager, “go in with an open mind,” said Bakker, who is now up to speed after only two or three flocks.

As of February 2014, almost 250 Ontario broiler farmers are using the Flock Manager system.

As the program evolves, Aker predicts further “tweaks” to Form 6, which starts with the farmer but is then passed along to the driver. “We’ve had varying levels of success,” she reports, largely because of different comfort levels of the drivers with using mobile electronic devices to input the data. The first solution involved texting the information using an older-style flip phone, but there were issues when big fingers met small keys. She is confident that a new transporter portal data entry system will work better.

Even though it is still relatively new, the Flock Manager system is currently undergoing a “rebranding” and will be known as CFO Connects – Trace, part of a complete system which will streamline, standardize and automate all operations. This new platform will help CFO reach its goal of simplifying how business is done in the chicken industry.