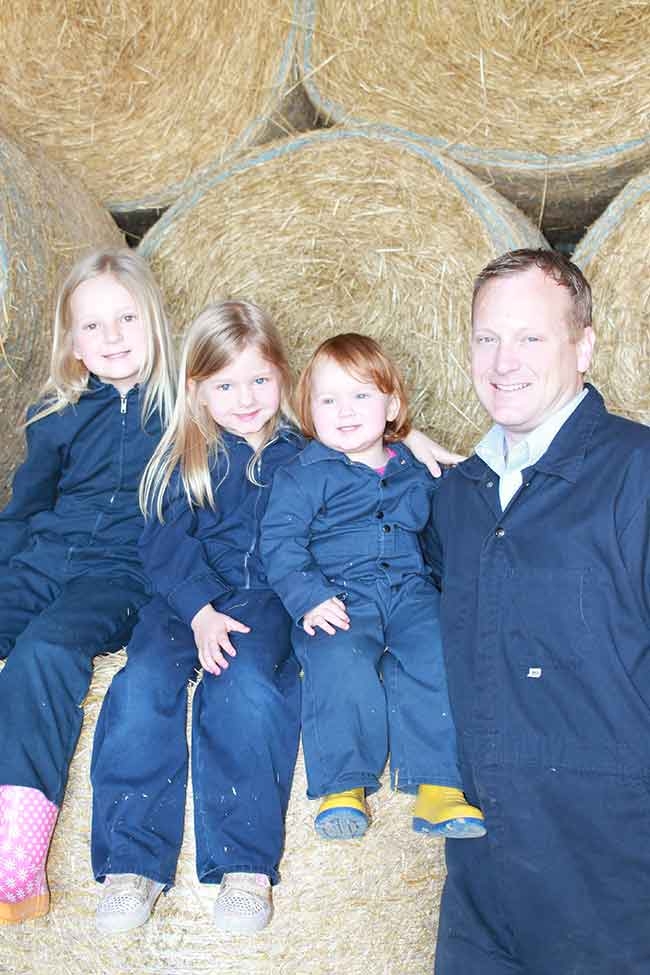 Clair Doan with his daughters, (L to R) Camryn, Sophia and Charlotte.

Both raised on dairy farms, he and his wife Kathryn love working with people and in the agricultural industry – he as a regional Associate Vice President of Agricultural Banking for National Bank of Canada, and she as Director, Global Business Development and Technology at AgCareers.com.

Growing up, Clair says he always had chickens and “knew I wanted to invest in the poultry industry.” In 2009, he and Kathryn built their first turkey barn on their 90-acre farm property in Norwich, Ont., raising about 9,000 heavy toms for the further processed market per year.   Turkey was chosen primarily because no minimum quota purchase was required and because of its reputation as a lean protein. “We viewed it as an opportunity for growth,” he says.

In 2012, they doubled their brooding capacity and now produce 18,000 birds per year. In 2014 they purchased another 100 acres of land, and hope to expand their grow-out capacity next year.

Their family has also grown to include three daughters – Camryn (6), Sophia (4) and Charlotte (2).  With both a busy family life and careers, Clair says he and Kathryn are fortunate that their jobs allow them the flexibility required around bird placement, shipping and clean-out dates. The corn, soybeans and wheat grown on the farm are cropped by one of Clair’s brothers, whose farm (along with farms owned by another brother and his father) is located on the same road.  “Our family philosophy is to have small farms, not just one big farm,” Clair says.

Although Clair says he is a “huge supporter of supply management”, he can’t ignore the relatively low return on investment.  Working as a financial adviser to Ontario farmers for the past 12 years, he says he has noticed  “debt levels continue to increase on farms.”

Despite the fact that supply management is stable and he and his wife made the decision to invest in new facilities and quota, Doan says he questions whether or not farmers in Canada are always meeting the needs of consumers. “Supply management may be failing us if we can’t produce what consumers want.”

He feels that farmers sometimes have a tendency to grow complacent, expect the supply management system to always remain the same and protect themselves first.

“We spend a lot of time looking inwards, not outwards.  If we fail to look outside ourselves, we are falling short,” he says.

Several years ago, increasing political pressures and potential trade deals such as the Trans-Pacific Partnership (TPP) that may or may not be ratified formed a nagging question in Doan’s mind: How do other countries deal with the loss of regulated markets?

Around the same time, Clair says he and Kathryn were invited to a dinner hosted by fellow Canadian poultry farmers who are also past Nuffield Scholars, where poultry farmers from Australia were also in attendance.  It was at this dinner that Clair began thinking about how the Nuffield Scholarship program could help answer the questions he had and provide an opportunity to learn about agriculture in other countries.

Doan says he loves learning and the opportunity for “self-directed learning was appealing to me.”

The Nuffield Canada Scholarship, part of Nuffield International, provides three Canadian farmers with $15,000 each, allowing them a minimum of 10 weeks of travel for the purpose of studying agriculture, with a mission of fostering agricultural leadership and personal development through international study.

After following other scholars closely for two years, and “getting my wife’s permission,” Clair applied for the scholarship last year and began his Nuffield journey, which will span a total of 18 months.  His topic of study is “Evaluating poultry markets to ensure Canada’s supply management system is efficient and innovative.” Doan says he plans on spending more than 10 weeks travelling the globe, some of which will be self-funded and supported by industry partners “who see the value in what I am doing.”

He began with the mandatory Nuffield Contemporary Scholars Conference, held In Ireland, and then spent three weeks travelling within Ireland, Scotland, England, Holland and Germany.

He says part of the value of being involved in the Nuffield program is understanding how Europeans view transitions as opportunity, for example, how the Dutch, who only produce cage-free eggs that sell for a low price, see the potential in exports. In Canada, the possibility of low returns makes the industry much more hesitant to go cage-free.

Although he noticed a decline in turkey processing and consumption in the UK and Holland, Germany has invested in market development and processing.  The primary turkey processor there processes 60,000 turkeys and doesn’t sell them as whole birds, which is a contrast to Canada’s market.  Instead, the turkey is sold in portions no bigger than one kilogram in size, making it easier for families and single people to make turkey part of their meal, he says.  He also observed that European customers aren’t as concerned as North Americans about how the turkey is presented, but they ask questions about what other values, such as animal welfare, the turkey they buy comes with. “It’s become more important,” he says.

Clair says the Turkey Farmers of Ontario have a levy for producers that is used for marketing and wants to know if it makes a difference. “It’s a question farmers should be asking,” he says.

Bridging the needs of production and what consumers want, and how farmers can play a role in that is one of the many questions Clair seeks to gain more knowledge about during his Nuffield journey.

“I think now is a good time to be looking at how other systems in the world are adapting to change, and understand that if we need to make changes down the road, how can we do it on our own terms,” he says.

This summer, Clair is travelling with fellow Scholars in India, Qatar, Turkey, Singapore, France and the U.S. and also plans to visit South America in the future.

How will Clair measure whether his Nuffield journey has been a success? “If I can create a level of awareness of how things are being done elsewhere, and that farmers are adaptable and they can change, that’s how I will measure success.”

It’s important to Clair that he communicate what he sees and learns during his travels.  In addition to using social media (Facebook and Twitter), he has also created a blog about his Nuffield journey, which is available at www.clairdoan.com.