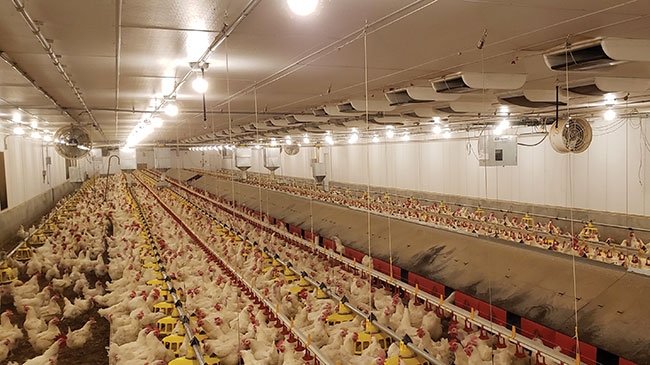 The Heppner’s have Premium+ nests and plastic slats, both from Jansen. Their feed lines are Roxell KiXoo pan loops for the hens, and Roxell Boozzter pan straight lines for roosters.

Barn Spotlight highlights new and retrofitted barns and hatcheries. Do you know a good candidate to be featured? Let us know at poultry@annexweb.com.

The business
Buffalo Creek Chicken is a broiler breeder operation run by Henry and Carolyn Heppner with their son Kelvin and his wife Kayla. What started as 500 breeder hens in the early 1980s grew to 5,000 birds in 2008. More recently, the Heppner’s doubled their flock size to 10,000.

The need
In Manitoba, the minimum flock size for a new entrant is around 7,000 and 8,000 birds. Existing producers below that mark were given the chance to expand to 10,000 without having to pay for the additional quota provided they invest in a new barn. The Heppners did just that. This past January, they opened a new broiler breeder barn big enough to house 11,000 birds.

The barn
The facility features community nests, which are common in some provinces but still unique in Manitoba. Instead of fitting birds individually, there’s space for up to 20 of them. That comes with pros and cons. On the positive side, some experts say community nests result in cleaner eggs and better hatchability as flocks get older. On the downside, they can lead to more floor eggs. “We tried to combat that as much as possible with things like lighting, ventilation and we can lift the feed lines so the chickens have a clear line of sight to the nest,” Henry says. Thus far, the producers have seen higher than average hatchability in the new barn. “But that’s just as much to do with how aggressive your rooster is and how well they mate,” Henry says, adding he’ll be better able to judge the impact of the new barn and community nests at the end of their first flock.

The Heppner’s have Premium+ nests and plastic slats, both from Jansen. Their feed lines are Roxell KiXoo pan loops for the hens, and Roxell Boozzter pan straight lines for roosters.