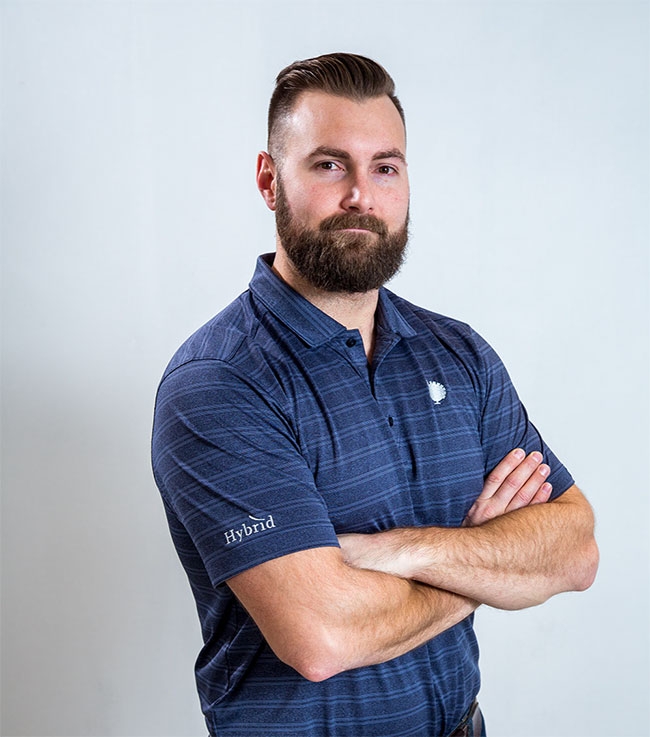 Have you ever seen the Scottish Highland Games and wondered what these people do for their day job? If you guessed that the burly, bearded guy in a kilt tossing a caber was a turkey geneticist, you would have been cheering on Owen Willems.

Willems is the kind of guy who is used to competing. He’s used to doing what needs to be done to get the job done, whether it’s tossing a heavy wooden pole or developing a new line of heavy turkey toms.

In high school and university, Willems was a high-level track and field competitor in shot put and discus throwing, which somehow translated into competing in Highland Games. He admits that caber tossing is a niche thing but it’s a sport that has taken him right across Canada to compete, from Victoria, B.C. through Regina, Sask., and all the way to the Antigonish Games in Halifax.

But he’s good with that. Venturing into unknown territory is typical for this young geneticist, guided by an important natural curiosity. As he explained, research and development (R&D) has some structure to it but is largely self-directed to come up with new and exciting ideas.

Willems was born and raised in London, Ont. His grandparents did some cash cropping but he had little exposure to birds outside of the backyard chickens his grandfather raised. “I’m not sure any of my past experience has related to my career in agriculture,” Willems says. That background has pros and cons: he has dealt with a steeper learning curve in animal handling, but he carries no preconceived ideas of how things should be done.

He received a bachelor of science in molecular biology and genetics from the University of Guelph in 2008. He then worked with Atlantic cod to earn a master’s of science degree in animal breeding and genetics in 2010, providing him with a good background in aquaculture.

From there Willems worked towards his PhD in animal breeding and genetics under the supervision of Dr. Ben Wood and Dr. Andy Robinson through the Centre for Genetic Improvement of Livestock. His area of research was focused primarily on the genetics of feed efficiency and feeding behaviour in group-housed turkeys, examining the correlations between feed efficiency and time spent feeding, number of meals, feeding rate and daily feed intake. The goal was to define the most efficient turkey under commercial conditions.

After joining Hendrix Genetics full time in 2014 he entered their rotational geneticist program, through which new trainees obtain experience with different species at different global locations. That time spent working overseas for the company has been one of the highlights of his career so far, spending six months in the Netherlands and eight months in France working with turkeys, laying hens and pigs.

“Relocating was difficult but worth it,” he says. “I learned a lot both technically and culturally.” Although he speaks French, he definitely appreciated that the Dutch spoke English. His wife and dog both accompanied him on his journey.

Eventually, Willems landed back in Guelph. “I would have been happy anywhere but I’m comfortable here. Guelph is tough to beat.”

He has since had the opportunity to visit other places as part of his working career, including Germany, Spain, Portugal, Turkey, New Zealand and of course all kinds of great Canadian cities and towns.

Now, as the geneticist overseeing their turkey breeding program, he plays a critical role at Hendrix Genetics. Turkeys are one of the biggest business units in the company and Hendrix is one of the largest turkey breeding and distribution companies in the world.

“He’s early in his career to have such respect and trust,” admitted Matt McCready, director of business development at Hendrix. While relatively new to the turkey industry, with him Willems brings new ideas and new ways of thinking.

The two work together as members of a global product development team. McCready will bring the demand profile to Willems – what do turkey farmers want? What direction will they take the heavier birds? Where do we go with higher egg production? From there, Willems will lead the R&D team towards that goal.

The answers developed at the North American head office in Kitchener, Ont., will feed into a global program, such as the Optima turkey that was launched for the medium market in France last year.

As Willems explained, the information from around the world transfers internally within species. Pigs, laying hens, turkeys, fish, shrimp and now insects are in the Hendrix line-up. “Each species has different traits but the genetics are pretty much the same,” he says.

While genetics can account for roughly 60 per cent of the production improvements over the last 50 years, theoretically there should be a limit to genetic improvement at some point, however technology continues to change.

Hendrix is heavily involved in the world of genomics, utilizing the differences between individuals at the DNA level. This technology, alongside family information and all the current phenotypic trait measures, allows for an increased rate genetic improvement year over year. As well, Hendrix maintains multiple genetic pools to provide the variability that is needed to make genetic progress, allowing researchers like Owen to expand the horizons of protein production into the future.