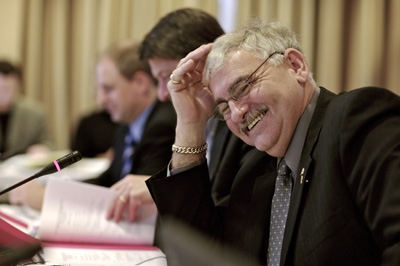 David Fuller says his time as Chairman of CFC has had many rewards, despite numerous challenges. But the time is right for him to leave the position and help his daughters take over the family broiler operation courtesy of Chicken Farmers of Canada

The Chicken Farmers of Canada’s (CFC) longest-standing chairman is ready to give up a life of airports, conference calls and meetings to focus on helping his three daughters take over the family farming operation in Nova Scotia.

David Fuller says that change is always good for an organization and that the  “time is right” for him to leave the position he’s held since 1999.

“Trying to run a farm and be the Chair of CFC has been more than a full-time position,” he says.

Now, he’s looking to spend more time with his family, and helping his three daughters — Natasha (along with her husband, Cory Dykens), Stephanie, and Jennifer — take over the farming operation, which produces 1.6 million kilograms of chicken on three farms in the Canning area, in the picturesque New Minas basin.

Fuller began his career in the chicken industry in 1976, when he formed a partnership with his parents John and Betty, who had a broiler and turkey operation.  At that time, and throughout the 1980s, chicken production increased and the family acquired additional production quota, expanding the farm to its current size.  David and his wife Diane bought out the farm completely from his parents three years ago.

Fuller worked on the farm full-time until 1987, when he began to take on more of a leadership role within the industry. That year, he began serving on the Chicken Farmers of Nova Scotia board, as Chair for several years.  In 1993, he became Nova Scotia’s representative to CFC, and served on CFC’s Executive committee in 1994 but had to resign that year as the CFNS had asked producers for its support in leaving CFC. Believing that leaving CFC was not the right thing to do, Fuller says he had no choice but to resign from the CFNS as well.  His fellow producers supported his position and voted against leaving CFC.  Fuller then returned to CFC in 1996.

Fuller says the reason he became so involved in the industry was “it was the opportunity for me to say thank you and hopefully, be able to bring something to the table that would be beneficial for the Canadian chicken industry,” he says.

“As Chair, my job was to make sure that the organization looks after the interest of the farmers that we represent, as well the partners that we work very closely with, whether upstream or downstream from the farm, including government,” he says.

He says he has found his experience as chair very rewarding.  “To be able to bring the parties together, to build consensus on issues that face our industry as a whole, has been one of the highlights,” he says.

There have been many highlights throughout his tenure at CFC, but the most significant highlight, says Fuller, is the Federal-Provincial agreement that CFC officially finalized in June 2001.   This required getting consensus amongst all provincial commodity boards, provincial supervisory boards, provincial agriculture ministers, as well as the federal agriculture minister.  “To be able to put an agreement like that in place that everyone could agree to, that would tell us how we are going to do business in the future as a unit, to me was a highlight, “ he says.

Fuller was also driven by the fact that when he first took the position of chair, he had many that told him he couldn’t get it done. “That was a mistake,” he says.  “When you tell me I can’t do something, then I go at it.”

He got involved personally — visiting ministers, talking with them one on one in each province, to make sure that they understood what CFC was doing, and what the scope and the intent of the agreement was.

A challenge, says Fuller, has been the trade file, because it has the potential of having a significant impact on Canadian farmers if it goes badly, regardless of whether a farmer is in supply management or not.

He says he took the file under his wing and was very close to it during his tenure.  “It has not been an easy challenge to sit and talk not just with Canadian officials, but officials from other countries to try and build consensus on how to best look after the interests of everyone involved,” he says.

He believes that with the support supply managed industries have from all political parties, whether provincial or federal, shows how important supply management is to Canada and how it is beneficial.  “I think our governments clearly understand the benefit of supply management, and that it’s biggest benefit, to be frank, is that it costs them nothing,” he says.

However, one of the biggest challenges he’s faced is how to convince the media of this, and in particular, that farmers do not set retail prices.  He expresses frustration with the fact that despite meeting with numerous editorial boards across the country to try and get this message across, “we just can’t seem to get it there.”

He says although the media likes to say that Canada is unique (with respect to wanting to protect supply management as a sensitive product) but “we’re not.”  He points to the U.S. having sensitivities around oranges, sugar, and cotton, and Australia and New Zealand, who claim to be free traders yet have so many barriers put in place, that no one can ship anything into their countries.

Despite the frustration of the trade file, Fuller commends the Canadian government for it’s continual support of supply management.  He says it is “unheard of” to have the Prime Minister mention support for supply management on two different occasions during his Speech from the Throne.   He also noted that Federal Agriculture Minister Gerry Ritz has been true to his word that supply management is non-negotiable.

A big challenge left unresolved as he leaves his position has to do with differential growth.  Since 2007, CFC has been working on provisions for differential growth in its operating agreement under the federal-provincial agreement.   In the past few years, growth has “subsided tremendously,” he says.

“We are in a growth market, but it’s minimal,” he says.  If the market was experiencing a growth of five per cent a year, it would be easier to achieve consensus amongst stakeholders.  Currently, the market is only experiencing one to two per cent growth annually.  CFC has been working on several formulas, and will continue to explore ways to allow for differential growth in Canada, he says.

Fuller says he is proud of CFC’s On-Farm Food Safety Program and it’s Animal Care Program, which were developed during his time with CFC. He also notes that CFC’s involvement, along with the other national feather boards and the Canadian Poultry and Egg Processors Council (CPEPC) with the Canadian Poultry Research Council (CPRC) has been a “real opportunity” for the organization.

The SM5 group was also formed during his tenure and he says that “having the ability to sit down with his fellow members of supply management and talk about issues that face us all has been very rewarding, and to be able to build a team that works closely together is so crucial,” he says.

Fuller says he has learned a lot from CFC on how to be a better farmer, as it has helped him to learn the issues and complexities of the industry. Hearing from other farmers is “eye-opening” he has learnt from them how to do things better.  “By communicating with each other you learn things, and that definitely helps you be a better farmer,” he says.

He has also benefitted from being part of the development of two of CFC’s strategic plans (they are developed every five years).  The strategic plan is a “roadmap” for the organization to follow, and it uses it to re-verify whether it’s going in the right  direction, or whether the members need to sit down and rethink things.  “I think it’s absolutely key, and I’ve adopted it on my own farm,” he says.

Fuller is also thankful for the many rewards and opportunities his time with CFC has brought. “The biggest reward for me in this whole job was the opportunity to meet with not just my fellow farmers, but people throughout the industry as well,” he says.

The opportunity to travel to many different places throughout the world and talk to with farmers and stakeholders in these countries has been something that he has enjoyed and he greatly appreciates.

“The travel that my wife and I have been able to do while I was chairman has been phenomenal,” he says. “We thank everyone from the bottom of our hearts for giving us that opportunity.”

He says that he thinks the opportunity to travel and see more of the “real world” has made them better people.

When speaking at a number of different events, one of his key messages has been “that in Canada, we take way too much for granted and we have no idea what it’s really like in a lot of other countries in the world,” he says.

Fuller announced that he would not be seeking re-election at the 2011 annual meeting of Les Éleveurs de volailles du Québec. His last official day as CFC chair was March 20, when the board elected B.C. representative David Janzen as the new chair.

When asked what advice he would give his successor, Fuller says, “always look for commonality and then try to build from the commonality out.  If you find the common ground between people or organizations on issues, you will continue to build consensus.”

Fuller says CFC is keeping him on retainer for six months to help with the transition between chairs.  The organization will be honouring him at its summer meeting this July in Winnipeg.