With his wife Andrea, the current NSEP Chairman consistently improves production by paying attention to the little details and having an eye on the future 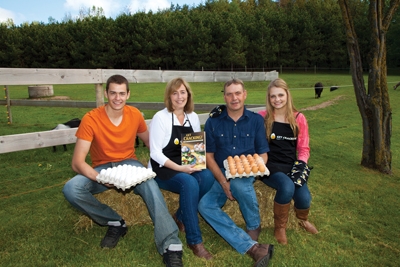 Paul and Andrea Overmars feel that they are fortunate to raise their children Craig and Jessica in rural Nova Scotia, and thank supply management for letting them earn a comfortable living and operate a farm they are proud of. Photo courtesy of the NSEP

In 1950, Anton and Feem Overmars bought a mixed farm in St. Andrews, N.S., and started rehabilitating it as a dairy farm.

By the early 1970s, they had 10 children, Paul being the youngest, and a successful dairy herd of 100 cows.

The Overmars family started a layer operation with one barn and 10,000 hens after realizing that their eldest would want to take over the operations of the dairy operation. They then added a federally registered egg grading station in 1973 and began grading and marketing eggs for their local area, selling the dairy operation to their oldest in 1976.

Paul has worked on the farm all his life, only taking two years off to attend Nova Scotia Agricultural College in 1982, where he earned a diploma in agricultural business.

He married his wife Andrea in 1987 and they purchased the farm from his parents the same year.  They have operated the farm together ever since, as well as raising two children: Craig who is now 20 and in his third year of university studying information systems, and Jessica, who is 18 and entering her first year of a bachelor of science, with the hope of pursuing a career in pharmacy.

When Paul and Andrea bought the farm, it had two layer barns housing 11,000 hens, with a federally registered grading station at the end of the first barn and a provincially inspected grading station in the second.

Three years later, they combined their two grading stations into one federally registered station attached to their oldest layer barn.

Then, in 1992, they bought another 6,000-bird quota and retooled their oldest barn. “We repeated this on the newer barn in the late 1990s with another 6,000 quota purchased,” says Paul.  “We also built a standalone, federally registered egg grading station in 1995.”

Five years later, the family built a pullet barn to produce their own replacement pullets. “Growing our own pullets has, in our mind, been the best improvement that we have made on this farm. Starting with the best pullet you can produce always continues to show, right until the end of the lay cycle, production performance consistently improves, “ say Paul and Andrea.

Paul and Andrea currently have quota for just over 23,000 hens and pullets.

Paul has also been active off the farm in the provincial egg industry for many years, becoming a Nova Scotia Egg Producers director in 1998 and elected NSEP chairman in 2011.

Back on the farm, attention to detail has always been very important to the family. “Always fix the little things before they lead to larger issues,” says Paul.

“This also ensures we have a pleasing environment in which to work for ourselves and our staff. Besides Andrea and I, we have three full-time staff, as well as seven part-time students who help with the grading and weekend farm work.”

They also emphasize the need for cleanliness and standards. “We strive to always score very well on all of our ratings – Egg Farmers of Canada’s Start Clean: Stay Clean for layers and pullets, EFC’s animal care program, as well as our Canadian Food Inspection Agency rating in our egg grading station.”

They admit that meeting some of the requirements of SC:SC and EFC’s animal care can sometimes seem daunting, “but being able to recoup the costs within our COP heightens our appreciation for supply management.”

One of the largest difficulties with being a small grader is marketing. “Most of the large retailers seem to prefer to only deal with large, national graders. Some of their requirements can only be met if volumes are large enough to absorb the costs. That said, though, there is still at least one large retailer that continues to see value in supporting local. As well, consumer support for local, smaller businesses seems to be gaining strength. That support is encouraging and will keep us in the egg grading business for now.”

As the Overmars family look forward into the future of the egg industry and their farm, one of the most important topics will be hen housing. “In light of the changes proposed for U.S. production systems, one can’t help but be concerned about how those changes will affect us, along with the consumers’ desire to know how their food is produced. For those of us facing retooling decisions in the not-so-far future, finding the right approach or direction can be very difficult,” says Paul.

Nevertheless, he admits that he and his family are fortunate to raise a family in rural Nova Scotia. “Thanks to supply management, we have been able to earn a comfortable living and operate a farm that we are so very proud of.”

As for his role as NSEP chairman, it is a brand new adventure. “I am struggling a bit with time commitments, as I am sure most chairs are. That said, I am focusing on filling the office to the best of my ability and meeting the expectations of those whom I represent.”

“As well, we hope to continue operating successful farms in Nova Scotia for generations to come.”