Highlights from the 24th World’s Poultry Congress, held in Brazil 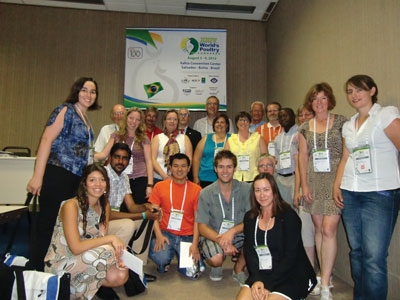 Many members of the Canadian branch of the World Poultry Science Association were able to present research and attend the WPC in Salvador, Brazil. Tennille Knezacek

Salvador, in Bahia State, Brazil, was the venue for the XXIV World’s Poultry Congress in August 2012. Congresses have been held regularly since the first one in 1921, held in The Hague, the Netherlands. Canada has hosted the event twice, in 1927 and 2000. This year’s was the second Congress held in Brazil, the first being in 1978 in Rio de Janeiro.

The Congress was held in the Bahia Convention Center in downtown Salvador, with the associated exhibition held in the same complex. There were approximately 2,000 delegates in attendance at the Congress and over 120 companies at the exhibition. About 25 of those delegates were Canadians and the annual meeting of the Canada Branch of the World’s Poultry Science Association was held during the Congress.

The Association has developed outreach programs to assist developing countries and has, in addition, become closely involved with initiatives to work with village or family poultry in such countries.

As might be expected in today’s environment, welfare occupied an important position among the scientific presentations, which was highlighted by Harry Blokhuis from the Humboldt University in Berlin. Blokhuis has been a major contributor to welfare research over the past several decades, and in his paper at the Congress, he reviewed much of the previous work on the topic. Notably, he introduced the concept of “welfare quality,” one outcome of a major co-operative research project in Europe and Latin America that  began in 2004 and ended in 2010. He raised questions regarding the “prescriptive regulations,” which have been the main way in which countries have addressed the challenges of poultry (and indeed other animals’) welfare. An example (not quoted in the paper, but nevertheless valid) would be the EU furnished cage, which has become mandatory for EU producers since January 2012. Regulations look good to consumers clamouring for them, but are far from perfect for the primary producer. Variations from farm to farm, and country to country, make prescriptive regulations difficult, if not impossible, to implement and to monitor. In addition, regulations hamper farmers in their efforts towards innovation.

Blokhuis, in reviewing the main conclusions of the Welfare Quality report, suggests that the use of “animal based output indicators” may be more effective in the long run, in achieving improved welfare quality. Here auditors making farm assessments consider the following categories and score the farm on a scale of acceptability.

More than 20 other papers, from 10 countries, mostly in Europe, also dealt with various aspects of poultry welfare.
Clearly, training auditors to monitor these criteria, few of which lend themselves to objective measurement, is a major challenge. To help train auditors using these criteria, the EC has published several books, which are available on the Welfare Quality website at www.welfarequalitynetwork.net.

A wide variety of papers were presented dealing with disease diagnosis, treatment and prevention. One of considerable interest was by Dr. David Swayne of the US Southeast Poultry Research Laboratory in Athens, Ga., dealing with the current worldwide status of avian influenza and the methods used in various countries to deal with outbreaks over the past several decades. Of interest to Canadians, who last encountered highly pathogenic avian influenza (HPAI) in 2004, are the methods of control and eradication practised. Canada’s policy is to depopulate affected and surrounding flocks and thereby eradicate the disease while providing government compensation to affected producers. This has been successful in Canada in the few cases of infection that have occurred.

However, where infections become more widespread, and where the process of depopulation is either difficult or impossible, other strategies are required, including vaccination. Examples were quoted from Hong Kong, Egypt, Indonesia and Vietnam. In all of these countries (with the possible exception of Hong Kong), there are large numbers of birds kept as family or village poultry that cannot be easily vaccinated. In addition, if no compensation is available, it is difficult to persuade poultry keepers to depopulate apparently healthy birds.

Although vaccination alone cannot eradicate HPAI, it can be extremely helpful in lowering the level of infection to the point where other methods can be used to accomplish eradication. For vaccination to be effective, a minimum of 60 per cent, and preferably 80 per cent, of at-risk birds must be vaccinated.

Canadian scientists gave 15 of the approximately 200 oral presentations, plus contributed a variety of posters.

Members of the International Poultry Hall of Fame are individuals who contributed to the world’s poultry industry above and beyond the call of duty. They are named and inducted at World’s Poultry Congresses. The Hall of Fame was started at the 1988 Congress when 25 members were named, but at subsequent Congresses, only five new members have been inducted.

For 2012, they were Prof. Peter Horn from Hungary, Dr. Nuhad Daghir from Lebanon, Dr. Ganda Lal Jain from India, Prof. Egladison João Campos from Brazil and Dr. Kyoshi Shimada from Japan. Dr. Daghir has a strong connection with Canada, having been technical director at Shaver Poultry Breeding Farms for a period in the 1990s.

The XXIV Congress coincided with the 100th anniversary of the founding of the WPSA and one of the plenary sessions consisted of a review of the first 100 years presented by this author. Few international organizations have functioned for 100 years, but the WPSA has grown from an initial 19 founding members to over 7,000 today, in more than 80 national branches. The WPSA not only sponsors Congresses, but also publishes the World’s Poultry Science Journal, a quarterly publication consisting of scientific review papers.

Following the financially successful 1992 Congress in the Netherlands, the Dutch Branch of WPSA established awards to individuals or institutions judged to excel in one of the three pillars of the organization: Education, Organization and Research. The awards consist of 11,000 euros (approximately $13,400) to be spent on a project connected with the recipient’s field of expertise. Recipients must attend the subsequent Congress to report on the project.

The 2012 winner for Research was Dr. Jae Yong Han, a geneticist from the Seoul National University in South Korea. The Poultry Cooperative Research Centre (CRC) in Australia was awarded in the Education category, its second win.

The XXIV World’s Poultry Congress provided a valuable scientific review of current knowledge in many fields, and pointed to a viable future for poultry science and the poultry industry, in spite of a variety of challenges. The Congress represents a unique meeting place where old and new contacts are made, and information exchanged in a comfortable environment.
The next Congress will take place in Beijing, China, in 2016.