Managing the breed, not just the bird is key for maximizing performance 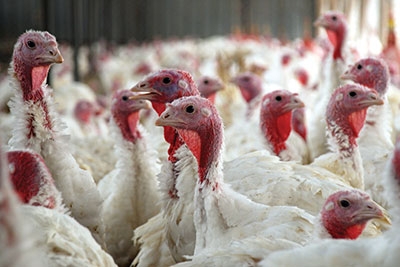 Turkeys are a great example of how breeds or strains within a breed can perform much differently when fed a diet not forumulated for that particular bird. Leg, crop, feathering and other issues can also result

It’s an easy mistake to make.  For the most part, they look the same, sound the same, walk the same, and behave pretty much the same.  There are just a few breeds of chicken and turkey, and within those, just a few widely used strains.  Because they seem so similar, a lot of growers tend to raise the breeds the same way, resulting in inconsistent performance, or one or both breeds performing poorly on a regular basis in a particular operation.  The question is, why does one bird perform poorly compared to the other for one grower, but for another grower, the same bird outperforms its counterpart?  Well, there are a few answers…

Hatchery
All of the breeder companies are working toward the perfect bird, and each breed has its strengths.  But to truly find out what bird is best in any operation, they need to be raised in their ideal conditions, which can be significantly different – or maybe not necessarily so different, but small differences can significantly affect the end results.  The first example is one that is outside of the control of the producer, but can actually affect flock performance as much as any other factor, hatchery temperature and humidity profiles.  As you all know, especially in the day of mixed breed hatcheries, following the same profiles for different breeds can result in a much different chick / poult, or big differences in percent hatched of set eggs.  For those who are not well-versed in incubation and hatching, it may be surprising to find that the eggs are ventilated to release heat, rather than having to provide heat throughout the process to keep them warm.  This heat removal process is affected by egg size and shell thickness, so a strain with larger eggs or a breed with thicker shells may have a lower ambient temperature requirement to maintain the proper internal temperature.  A degree or two either way can dehydrate the poults, or alter their development, which can cause leg issues or high early mortality at the farm.  The profiles should even vary between eggs early in a flock to eggs late in a flock.

Temperature
The primary breeding companies have commercial management guides, and within the guides you’ll find several tables and graphs illustrating their best recommendations for optimum performance.  One of these will be a temperature profile table.  Some of the companies have gone to as much effort to provide them along with humidity ranges so temperatures can be adjusted if there are big shifts in humidity.  One example of a difference in temperature is in the general broiler guides where we see recommendations when humidity is 50 – 60% of 75 – 79°F for Cobb, 73 – 76.5°F for Ross.  The same types of differences can also be seen in turkeys.  It is easy to see how large swings in temperature can affect performance in the summer with decreased weights.  It has been shown in trials that small early differences from standard temperatures cause lost weight and disease that is difficult to compensate for later in the flock.

Nutrition
Turkeys are a great example where breeds or strains within a breed can perform much differently when fed a diet not formulated for that particular bird.  Feeding a diet formulated for a different breed can actually result in weight shortfalls as much as a kilogram.  Leg, crop, feathering, and other issues can also result from formulations that are not tailored to the strain.  These types of performance problems can arise from imbalances in amino acids and other nutrients, like the balance of calcium and phosphorous.  There are strains of turkey that grow better than others when fed a veggie diet, and some are more suited for an antibiotic free program.  There are even seasonal differences, with some strains being particularly strong performers in the cooler months when low ventilation rates can cause respiratory problems or poor litter conditions, which normally would lead to higher condemn rates in other strains.

Lighting
When it comes to lighting, there are many variables, and with some aspects, not enough research has been done to establish rock-solid standards.  There are still some questions, but there are some things we do know.  When it comes to colour, in general breeding birds respond to red and yellow tones best, around 3000K, while commercial birds are more flexible.  There has been little data showing much performance affect changing wavelengths for lighting meat birds.  Colour for the most part, though, is pretty universal for breeds and strains.  The real differences come in when we talk about dark periods and light intensity.

Ross recommends a first week light intensity of 40-50 lux, reduced to 5-10 thereafter, while Cobb is at 25 lux first week, and 5-10 following.  When it comes to turkeys, Hybrid, for example recommends 80-100 lux in brood, with a reduction to as little as 60 lux after that.  Dark periods are somewhat controversial because everyone has their own ideas about “midnight snacks”, or giving birds the equivalent of a full night of sleep a people would take.  Ross and Cobb, however, have recommendations, and they vary a little.  Ross advises one hour of dark in brood, 4 hours after that, and never more than six hours.  Cobb is also at one hour in brood, and anywhere from six to twelve hours (in the case of birds with an ADG greater than 60 grams).  These are pretty dramatic differences.

In summary, it is clear that managing to the specifications of the breed and strain of bird you have is one of the big keys to maximizing performance.  From the hatchery and barn temperature and humidity profiles to the nutritional requirements and lighting recommendations, each factor can affect mortality, morbidity, feed conversion, and condemnation to a great extent.  It’s a great idea to make use of the management guides, nutritional information, and other technical support that breeding companies provide on their websites and through their representatives.