Bacteria eaters are antimicrobial option to reduce the risk of key foodborne pathogens. 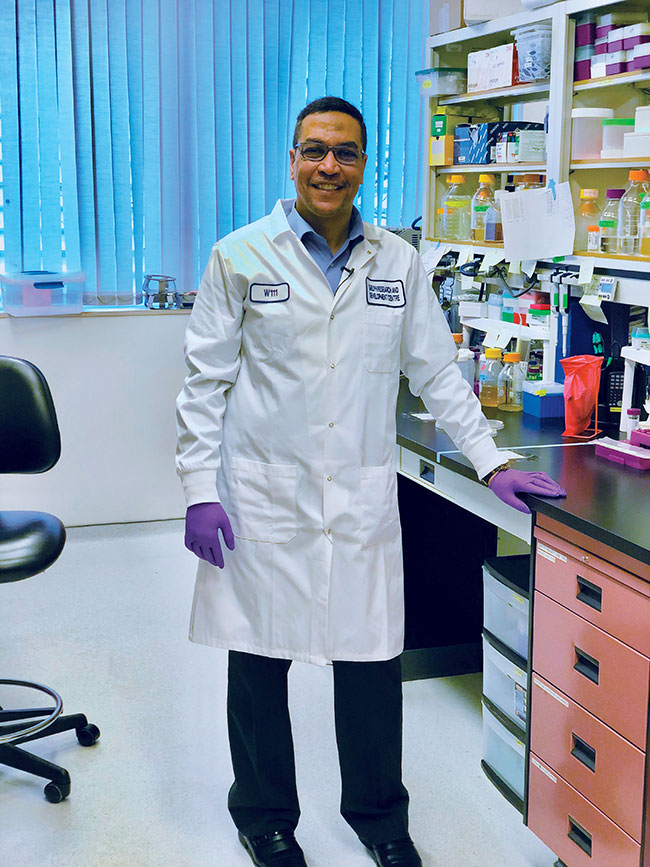 Hany Anany is a research scientist at Agriculture and Agri-Food Canada’s Guelph Research and Development Centre.

Campylobacter and Salmonella continue to top the list of troublesome foodborne pathogens in Canada. They live in the intestines of many food producing animals, including poultry, and commonly contaminate raw meat products during slaughtering and processing.

In search of solutions, an Ontario researcher is studying bacteriophage (bacteria “eaters”), a virus that attacks target bacteria. He’s looking to see if it could be used to improve food safety while reducing the use of conventional antimicrobials.

There are many points along the path from farm to table where contamination can occur. “Research clearly indicates that cross contamination during processing and chilling steps is taking place and represents a significant food safety risk during poultry processing,” says Hany Anany, research scientist with Agriculture and Agri-Food Canada. Anany is lead investigator on a three-year research project looking at the use of bacteriophage to reduce the risk of foodborne pathogen contamination on poultry products during processing.

New interventions needed
Studies over the last decade at provincial and federally inspected poultry processing plants confirm the ongoing issue of pathogen contamination. They highlight the need for new strategies and tools to reduce the risk and improve overall food safety.

An Ontario Ministry of Agriculture, Food and Rural Affairs (OMAFRA) study looked at the prevalence of Campylobacter and Salmonella in broilers at processing plants. It found the pathogens were more prevalent after chilling (including rinsing), compared to when live birds arrived at the plant.

Anany has been studying the use of phages as a way to mitigate the risk of different foodborne pathogens to improve food safety for the past 16 years. “There is clear evidence that Campylobacter and Salmonella are ongoing and unresolved challenges for the poultry industry and Canadian consumers,” he says. “We need to explore various innovative and cost-effective interventions that can be applied during processing to reduce the pathogen burden without affecting the quality of the final poultry product.”

He is partway through a research project to use phages – a green, environmentally friendly technology – as a novel antimicrobial option during poultry processing. His research, with funding through the Canadian Poultry Research Council’s poultry science cluster, is exploring the use of bacteriophages during poultry carcass chilling and packaging as a novel new way to control Campylobacter and Salmonella contamination.

The promise of phages
Lytic phages are bacterial viruses designed to only infect a specific host – e.g., Campylobacter or Salmonella – to disrupt the pathogen’s regular metabolism and effectively kill it. Several studies have shown the efficiency of phages to control the growth of different bacterial pathogens.

“Phages are a promising antimicrobial intervention that could be used before, during and after the water-based chilling step of poultry product processing,” Anany says. “Although phages aren’t yet being used in the poultry industry, post-chill use shows promise.”

In Canada and the U.S., some phage products have been approved and are used during food processing and on ready-to-eat food products. “Phages can be implemented at various stages of the food chain,” Anany says. “I see phages as one of the available tools we can use to mitigate the bacterial pathogen risk.

“We need to include phages as part of the hurdle technology to improve food safety through alternative antimicrobial options. And we have to understand the biology of phages and host interaction to implement them at the right stage of the processing chain using appropriate application approaches (encapsulation, spraying, immersion) to ensure their efficacy.”

Anany’s research is looking at two application approaches of phages – free and immobilized – at two critical points during poultry processing, as a mean to improve food safety without impacting the quality of the poultry products. Free phages can be applied to whole carcasses and cut-up parts by dipping or spraying a phage suspension before packaging to significantly reduce contamination of target pathogens – Campylobacter and Salmonella in this case – in the final consumer product.

Immobilized phages could be used in the absorbent pads within poultry product packaging to further minimize contamination during the product’s shelf life. “Phage-based bioactive packaging would be a controlled release to ensure added phages would be able to tackle any existing and post-processing contamination during the shelf life of the product,” Anany says. “This would extend product shelf life and improve food safety while maintaining the quality of the packaged food, including poultry products.”

Commercial potential
While phages are not currently used in poultry production in Canada, Anany believes this is because cost may be the biggest barrier for poultry processors. “It would be ideal if there was an integrated production system that includes phages throughout the production chain from farm to retail,” he says. “Phages could be added to feed and water for poultry on the farm, sprayed before and during processing and in absorbent pads for in-store packaging.”