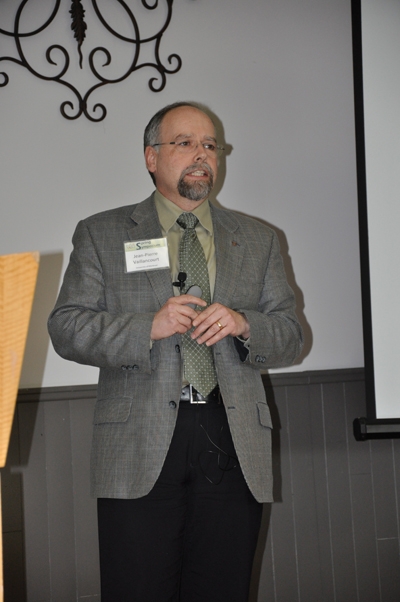 On May 8, 2012, the Poultry Industry Council (PIC) held its Spring Symposium (formerly known as Research Day), celebrating the careers of three distinguished poultry researchers, as well as highlighting research regarding poultry health and disease that it helps fund.

The day began with the presentation of the Poultry Worker of the Year Award to Ian Duncan, who did groundbreaking work on laying hen welfare, and poultry nutrition researcher Steve Leeson. Also honoured was the late Bruce Hunter, a much beloved teacher and researcher from the Ontario Veterinary College. Each award was preceded by a short video featuring colleagues and peers discussing the recipients’ accomplishments and significance to the field. All of the honorees were emotional and extremely thankful, none more so than Bruce Hunter’s widow, who was noticeably touched by the kind words said.

The rest of the day was devoted to researchers discussing various aspects of poultry health and disease, beginning with Jean-Pierre Vaillancourt from the University of Montreal, who discussed putting disease into perspective.

Vaillancourt stated that animal loss due to disease is a continuous and significant problem that claims a large number of animals each and every year. Inside the poultry system, he said, diseases constantly change and adapt, and therefore it is a constant battle between management and prevention.

He also said that as density continues to increase, productivity will continue to decrease because production diseases and infection pressure will rise. “The potential costs are huge if we are unprepared,” he said, “and can have major effects on human health as well.”

The second speaker at the symposium was Cindy-Love Tremblay, a PhD student at the University of Montreal studying antimicrobial resistance in birds and how normal gut flora could acquire resistance. Her results have shown that healthy poultry could be a reservoir for resistance genes, which could quickly spread throughout a population of bacteria.
Although the research is only in its early stages, Tremblay said that future work could be used to help reduce resistance by decreasing the ability of the bacteria to exchange genes.

Shayan Sharif from the Ontario Veterinary College at the University of Guelph followed with an explanation on the potential uses of probiotics in humans, as well as poultry. According to him, the use of a combination of probiotics in chickens can help modulate the immune response, increase weight gain, improve feed conversion and decrease both mortality and overall parasite/bacteria load.

This was demonstrated in tests using a cocktail of three different probiotic bacteria; the researchers found that the cocktail can help enhance the chickens’ immune response. Research is also being done on the potential antibacterial properties of probiotics using a new cocktail of five different probiotics targeted against a specific strain of Salmonella.
Ben Wood, a geneticist from Hendrix Genetics, then took to the podium to discuss the challenges associated with selecting for specific traits in turkeys. He said that screening for metabolic disorders with a genetic basis are quite effective, but artificially selecting against behaviour and pathogen resistance is more difficult.

The reason for this, Wood said, is that, by selecting for improved resistance, the results visibly decrease the presentation of commercially viable traits, such as growth rate and feed conversion. “And until breeders get the word that consumers are willing to pay for less product,” he added, “things aren’t going to change.”

The final scientific presentation was by Michele Guerin from the University of Guelph on the prevalence of Salmonella serovars in breeder flocks in Ontario. The results showed that there was a seasonal difference between Salmonella’s presence in breeders (more pronounced in the fall) and hatcheries (summer), and that the best way to eliminate an outbreak is constant monitoring at the breeder flock and hatcheries across all poultry types. She noted that if she and her research team could gain a better understanding of why these seasonal patterns occur, they could design studies to show how these infections could be prevented.

Len Jewitt, owner of BLT Farms Inc., a turkey, egg and broiler operation north of Guelph, ended the day with an emotional presentation on the impact of disease at the farm level. Jewitt, who several years ago had one of his layer barns test positive for Salmonella enteritidis (SE), he explained that there are many costs to the producer when disease strikes, and these go beyond dollars and cents.

The biggest challenge was the mental cost. “This is something that as an industry, we don’t want to talk about,” he said.

He said the positive result made him feel “like a loser,” and he asked himself what had gone wrong, as he and his employees had been so clean and had followed all necessary protocols.

He finished his talk with a piece of advice for those who are responsible for going on the farm and beginning the depopulation and disinfection process – to use a gentle hand. “Remember you are walking into someone’s dreams,” he said.