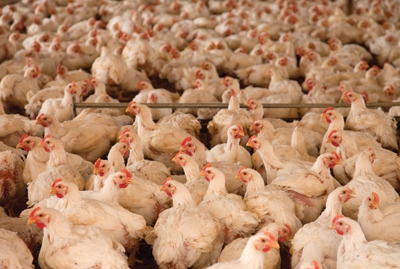 Probiotic Potential. AAFC researchers have been studying the efficacy of the probiotic bacteria Bifidobacteria in reducing Salmonella in broilers.

Antimicrobial resistance is an ongoing concern for the poultry industry, and judicious use of antibiotics is important for sustainability and future success. Therefore, we must continue to seek alternative methods for the control of animal- and food-borne pathogens.

One strategy toward mitigating antibiotic use is to build up the numbers of natural antagonists to pathogenic bacteria in the chicken gut. This can be accomplished by colonizing the GI tract with probiotic bacteria and/or adding nutritive factors that enhance colonization by these bacteria.

Probiotic bacteria are live micro-organisms that confer a health benefit on the host, when administered in adequate amounts, by improving their intestinal microbial balance. In particular, species of Lactobacillus and Bifidobacterium have been studied to control pathogens in the gut. Maximum probiotic effect can be achieved by determining which organisms are most effective and what their mode of action is.

Dr. Jim Chambers, with Dr. Roger Wheatcroft of Agriculture and Agri-Food Canada, has been investigating mode of action for Bifidobacteria, which produce volatile fatty acids (VFAs) that appear to diminish the growth of many enteric pathogens. The VFAs are produced through a pathway known as the “bifid shunt,” a feature of Bifidobacteria. Chambers’ laboratory has created mutants of the Bifidibacteria B. pullorum that are deficient in the bifid shunt. These have been compared to wild-type B. pullorum and B. animalis for their ability to prevent gut colonization by Salmonella typhimurium. These trials will establish if VFA production is crucial for Salmonella suppression and if the bifid shunt has an effect on B. pullorum’s ability to colonize the gut.

Their findings? Results indicated that acid production by Bifidobacteria is consistent with the absence of detectable Salmonella in at least the proximal gut (duodenum and jejunum) of the digestive tract of broiler chicks tested 14 days after inoculation. Further work is required to determine whether greater reductions in Salmonella populations due to probiotic effects of B. pullorum occur in chicks as they develop beyond 14 days. Also, given the relatively weak probiotic effects of single organism probiotics, it appears that Bifidobacteria definitely warrant further investigation for Salmonella control in poultry in general. For more information on this project, please visit www.poultryindustrycouncil.ca.

Over the past 30 years, the 42-d body weight (BW) of broilers has been increasing at a rate of 30g/year. This is due to increased selection for faster growth, improved feed conversion, and a higher percentage of breast muscle. In comparing mature BW and carcass traits, genotype is an important determining factor in how birds develop. High degrees of genetic variation can be seen in BW of various lines of mature chickens and in breast muscle development.

One primary tool breeding companies use for selection is BW. It is well documented that there is an inverse relationship between growth and reproduction. Therefore, selection for increased BW and carcass size of broilers can potentially have a negative impact on the reproductive qualities of the broiler breeder. Increased feed restriction is the chief means of dealing with this negative relationship.  Thus it is important to be aware of the growth potential of modern broilers in order to properly manage the broiler breeder parents.

The basis for applying feed restriction in the pre-laying and laying periods for female broiler breeders is to control nutrient flow to the liver, which ultimately controls the yolk lipid that is deposited in the ovarian follicles. Excess follicle development has been associated with the laying of double-yolked eggs, eggs with poor shells, and in some instances, laying that occurs outside of the normal patterns of lay.  Providing pullets with excessive nutrients during the period immediately preceding sexual maturity vastly increases the rate of yolk deposition on the ovary. Overfed birds exhibit an increase in the number of large yellow follicles (LYF).

Drs. Frank Robinson, Robert Renema and their research team at the University of Alberta were able to show that breeder strains can allocate nutrients differently during sexual maturation. They have been studying whether short-term overfeeding results in a differential response in eight different strains – in essence, a “stress test.”

Their results? Overfeeding pullets did not result in significant increases in the number of large follicles in such a way that each strain could be rated as flocks were not uniform enough. However, it was found that using 20 per cent extra feed and observing the reproductive results is an excellent way to assess how well hens do. If breeder organizations used a standard test like this, they could better estimate how products may function at the producer level. To read more about this research project, please visit www.poultryindustrycouncil.ca.

The 54th London Poultry Show came and went and, despite such issues, as a lack of name tags, a date change and a few other minor problems, the two-day event went very well. The weather was kind to us (it rained) – less so to those hoping to get an early planting again this year – and exhibitor feedback to date once again has been positive.

I was asked by the press if there was anything new at the show and after listing off a few items – mainly energy-saving technology, new layer cage systems – I remarked on the fact that it would be an odd show if there were many new things to see because technology increases are generally incremental.

However, someone visiting the show who had also been at the first show (54 years earlier) would have found it a very different show indeed. This made me reflect on the nature of research and the generally incremental rate at which research findings are commercialized and adopted, if indeed they ever are. A prime example of this was highlighted at our annual Research Day on May 10, where we heard the story of the Enviropig. Now here is a really stunning example of outside the box thinking to solve and environmental issue and it works. Here is a pig that through world-class gene technology undertaken at the University of Guelph is capable of digesting more and excreting less phosphate into the environment. What a terrific solution to an environmental issue, not to mention the efficiency gains brought about by the better phosphate digestion. But its commercialization is mired in community concern over gene technology. No wonder farmers are left scratching their heads and wondering why they fund research.

However, we also heard that poultry leads the world hands down in reducing the environmental footprint of animal protein production. Now this is definitely something to brag about next time you’re in the pub, but spare a thought for why this is so, and make sure you give credit where it is due. The reason we tread so lightly on the surface of this fragile planet is because industry has bred and fed its way to spectacular feed conversion – a direct result of research, much of which was paid for by you and your predecessors. But we can’t rest easy on the fact that we’re so far out in front. We need to keep up to the emerging challenges (and there are plenty) heard about at the Research Day and keep supporting the brilliant minds who are addressing and tackling such problems as particulate emissions, ammonia emissions and flies transmitting antimicrobial resistance. By joining PIC, coming to our events and becoming engaged in some of our projects, you can play an active role in turbocharging progress.