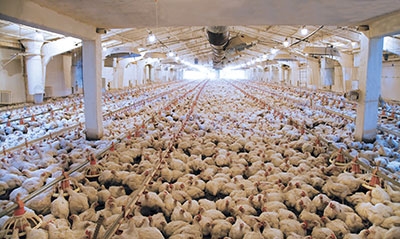 Public pressure and subsequent government legislation has meant a rethink of how antibiotics are used in livestock production.

It has been shown that the immune stimulant cytidine-phosphate-guanosine oligonucleotides (CpG ODN) can be beneficial in protecting chickens from bacterial infections caused by E. coli and Salmonella species. This immune stimulant is effective both in young chicks and in older birds and appears to act by stimulating the innate immune system.   Host Defense Peptides (HDP), also known as Antimicrobial Peptides, are naturally antibacterial, antiviral and antiparasitic, and have been touted as “natural antibiotics.” HDP also have activities that correspond to many aspects of innate immunity. HDP have been shown to enhance immune responses and to protect against infection by bacterial pathogens.

NANOPARTICLES
Nanoparticles such as carbon nanotubes (CNT) can be used with a wide variety of immune stimulants including CpG ODN. Nanoparticles show great promise for biomedical purposes because their physicochemical properties allow them to pass through biological barriers to get to intracellular targets. It is possible to link the nanoparticles with other molecules such as CPG ODN and HDP. Not only can other molecules be conjugated to CNT but also it has been shown in short-term studies that these particles have very low toxicity in the host. These characteristics make nanoparticles excellent delivery systems for immune stimulating particles.

Polyphosphazenes are a group of synthetic polymers consisting of a backbone with alternating phosphorus and nitrogen atoms and organic side groups attached to each phosphorus atom. Polyphosphazenes have been shown to act as adjuvants to enhance adaptive immunity and when used in formulation with immunotherapeutic agents such as CpG ODN result in enhanced innate immunity. Polyphosphazene polymers can be formulated either in their soluble state or as microparticles. Poly[di(sodiumcarboxylatoethylphenoxy)phosphazene] (PCEP) has been widely studied and has shown the ability to enhance both innate and adaptive immunity.

Dr. Brenda Allan and her research team at the Vaccine and Infectious Disease Organization (VIDO) have been studying whether carbon nanoparticles can be used to maintain the biological function of CpG ODN and/or HDP while enhancing the biological activity of   immune stimulant without significantly compromising the host immune response and safety in the chicken model.

The initial plan of the researchers was to combine both CpG ODN and HDP in a single formulation. However, the chemistry used to link HDP to the CNT was different than that needed for CpG. This precluded the use of a single formulation that included both CpG ODN and HDP with the CNT. Work done determined that the HDP they intended to use did not provide immune stimulation in poultry. Considerable work done in the laboratory also failed to identify a suitable candidate. Thus the researchers concentrated their efforts on the formulation of CpG ODN for enhanced activity.

Through these efforts, the researchers have optimized the formulation of CpG ODN with CNT using in vitro studies. They have also tested the effect of this combination in vivo using a Salmonella challenge model of young chicks. Preliminary work showed that conjugation of CpG ODN to CNT showed promise in lowering the dose of CpG required. However, they were unable to repeat these results in subsequent experiments. They therefore elected to test the effect of formulation of CpG ODN with either soluble or particulate polyphosphazenes as these formulations had been effective in other species and had shown promise in poultry. Unfortunately, these formulations also did not provide enhancement tot the activity of the CpG ODN.

Despite the failure to identify a delivery system that enhanced the activity of CpG ODN, Dr. Allan believes that this immune stimulant shows great promise for the replacement of antibiotics in the poultry industry. Further research is needed to develop a delivery system to make its use economically feasible, however. To read more, please visit www.poultryindustrycouncil.ca.