PIC Update: Preserving the Past for the Future

Preserving the past for the future

Transplantation and cryopreservation of chicken gonads

Today’s commercial poultry are generally sourced from only one of two breeders. This means that commercial avian genetics are becoming narrower and genetic variation is being lost. It is important to preserve genetic material so that we retain the ability to be able to breed birds and adapt them for potential new production environments, disease resistance etc.

A common method of preserving genetic variation is to take genetic material (e.g., sperm) from living birds and freeze it for future use. However, avian genetic material is difficult to store by accepted methods.

As an alternative method of preserving avian genetic material, Drs. Yonghong Song and Fred Silversides at Agriculture and Agri-Food Canada, have been working on transplanting ovarian or testicular tissue to recipient chicks. Pilot work had suggested that transplantation of ovarian tissue in newly hatched chicks might be successful.

To test their theory, ovaries were removed from day-old White Leghorn chicks and replaced with ovarian tissue from Barred Plymouth Rocks (BPR). Some chicks were administered an immunosuppressant, and all birds were raised to sexual maturity. The hens that received the ovarian transplants were inseminated with semen from BPR roosters (if the transplant was successful, this would result in black chicks). Black chicks were indeed produced – the first report of success using this technique.

In males, the testes were removed and donor tissue was placed into the abdominal cavity or under the skin of the back or abdomen. Frozen/thawed tissue was also used for some of these transplants. All successful recipients of testicular tissue showed normal comb and wattle development. Once the birds were sexually mature, transplanted testes were removed from the hosts, cut into small pieces, and the fluid that seeped from the surface was collected. This fluid was used to inseminate BPR hens by surgically placing it in the oviduct. This prodecure produced fertile eggs resulting in black, donor-derived chicks.

A simple freezing protocol was also used to preserve testicular tissue from day-old BPR chicks. This was later transplanted into the abdominal cavities of nine castrated WL chicks. Insemination using sperm from one transplant produced 23 offspring.

What does all this mean? The researchers were able to successfully transplant ovarian and testicular tissue between newly hatched chicks, and freeze gonadal tissue using a simple protocol. These techniques provide simple approaches for the conservation of chicken germplasm and may provide a universal protocol for the conservation of avian germplasm of all species and lines.

To read more about this project visit: www.poultryindustrycouncil.ca and click on “Research Results. 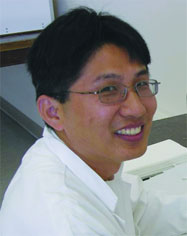 Dr. Fred Silversides was raised in Saskatchewan where he completed an undergraduate degree in poultry science and a PhD in poultry genetics. In between his Saskatchewan degrees, he obtained an M.Sc. in animal genetics from the University of Massachusetts. After a year-long post-doctoral position in France, he taught at Universit? Laval before leaving in 1996 for British Columbia and eventually starting work for Agriculture and Agri-Food Canada in 2000. After three years in Nova Scotia, he relocated to the Agassiz Research Centre in British Columbia. Dr. Silversides was trained as a poultry geneticist but conducts research on poultry in a broad range of disciplines. His research activities include poultry nutrition and welfare, but his principal interests are in conservation of poultry genetic resources.

Dr. Yonghong Song received his bachelor’s degree in veterinary medicine and his M.Sc. degree in animal physiology and biochemistry, both from China. His PhD training was from the Department of Poultry Science, North Carolina State University under Dr. James Petitte, working on avian primordial germ cells. He came to Dr. Silversides’ lab as a visiting fellow in June 2004 to work on reproductive manipulation for genetic conservation. He is currently a research associate with Dr. Kim Cheng at University of British Columbia, and is continuing his research at Agassiz on ovarian and testicular tissue transplantation between different species of birds.

So you’re either reading this at or you just got back from the London Poultry Show. You’ve had a great time, seen some new equipment, listened to four terrific speakers and caught up with some old friends. You’ve just read two brilliant short articles on some important research that you’ve helped fund and you’re wondering what’s coming next from PIC?

BIG STEP FORWARD
With the advent of the strategy and the “outcome” focus of our work, the way in which projects are being supported by the feather boards is also changing. Each of the boards has signed a memorandum of understanding with PIC, locking in a set amount of funds each year “this MOU gives us the ability to be able to plan ahead for research investment and will give government and other co-investors the confidence that the industry is a serious partner in research” says PIC chairman Ed McKinley, “it also means that if industry is looking for some specific work to be done and we don’t receive a proposal for that particular work, we can commission the research. Its essentially given industry more flexibility and control” he said.